Alternators are the workhorse of the power generation industry. The AC power will be generated at a specified frequency. It is also called a synchronous generator. An Alternator is an electrical generator that converts mechanical energy which is provided with the help of prime mover to electrical energy in the form of alternating current. Electricity is produced in Alternators by using Faraday’s law of electromagnetic induction. There are two types to produce electricity in Alternators type1 rotating magnetic field with a stationary armature,  type2 a rotating armature with a stationary magnetic field.

Why it is called a synchronous generator?

The electrical frequency that is produced is locked in or synchronized with the mechanical rate of rotation of the field of the generator. 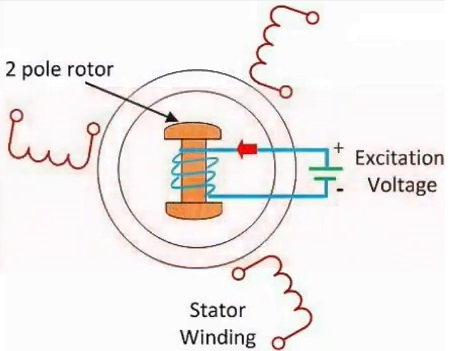 The armature will be in the stator and the field will be in the rotor. The rotor will be the electromagnet and will be driven through the prime mover it some speed ωm/Nm . When it will rotate we will get some electrical energy. This electricity will have frequency associated fe with the Nm are very closely related to each other.

So it means that for two pole machine to produce 50 Hz it should rotate the generator field at 3000 rpm any other speed will not gives us 50 Hz.
Now for example if we increase the number of poles to 4 then and we have frequency 50 Hz.

By rearranging the equation we get:

Which means that if we increase the number of poles the synchronous speed will decrease.
Internal voltage generated voltage of AC generator:
The emf generated in any AC machine is given by the equation: 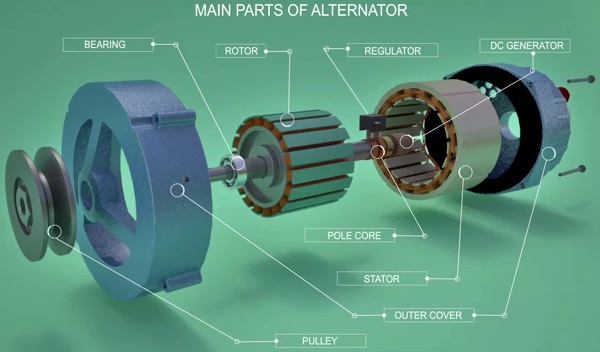 The main parts of Alternator are rotor, stator bearing, slip-ring.

The process of strengthen and creating the magnetic field of Alternator by providing the necessary direct current to the field winding of the Alternator. A rotor with just four poles rotor coils are excited with a DC power source by separate dc source called exciter.

The function of the excitation:

Two small dc generators are used as exciters. It is the oldest of all due to various problem. Now a days it is not conventionally used for large Alternators.

It consists of AC generator and thyristors. The rectifier bridge directly connected to the Alternator shaft or driven by separate motor. It is further divided in to two types:

There is no rotating part in this excitation system. It is small in size.

The prime mover will rotate the rotor. This makes the rotor flux also rotate along with it at the same speed. Such revolving magnetic flux now intersects the armature coils which is fitted around the rotor this will generate an alternating electromagnetic force across the winding. Since for polar rotor has got two pairs of NS pole when the rotor turns of half revolution the induced EMF takes one complete cycle. So it is clear that frequency of the induced EMF is directly proportional to the number of poles in rotor speed. It can be easily established that frequency of induced EMF rotor speed and number of poles are connected through the following relationship:

It is clear from this relationship that frequency of electricity produced is synchronized with mechanical rotational speed for producing three-phase AC current. Two more such armature coils are placed at the phase difference of 120 degree in the stator winding.

Generally one end of these three coils are star connected and three-phase electricity is drawn from the other ends neutral cable can be drawn from the star connected end. It is clear from equation that in order to produce 60 Hertz electricity a four pole rotor should run at following speed of 1000 and 800 rpm. Centrifugal force on poles of the rotor will be generated through such huge rpm. So salient polar rotors are generally having 10 to 40 poles which demands lower rpm. Salient and polar rotors are used when the prime mover rotates at relatively lower speed from 120 to 400 rpm. Pole core is used to effectively transfer magnetic flux and they are made with fairly thick steel lamina. Such insulated lamina reduces energy loss due to eddy current formation. DC current is supplied to rotor with a pair of slip rings. This is the reason why a rotating magnetic field approaches used in Alternator.

The slip rings have to fit in the rotating coil method with the armature to produce electricity but with slip rings transferring such high voltage is impractical. Slip rings are used to transfer low DC for excitation. Small DC generator will be used to provide this DC current which is fitted on the same prime mover. In Such Alternators are called self-excited where the voltage varies with variation of load generator. It is desired to keep the terminal voltage in a specified limit automatic voltage regulator helps in achieving this voltage regulation can be easily achieved by controlling the field current. If terminal voltage is below the desired limit regulator increases the field current. This will result with increase in terminal voltage if terminal voltage is below the specified limit the reverse is done.

Difference between Alternator and Generator:

There is difference between generator and Alternator but many people say that both of these things are similar and they both do the same thing. So generator and Alternator is the same thing this is incorrect at all because you know both of these machines are used to convert the mechanical energy into electrical energy and both take the same amount or same power that is the mechanical power and their primary work is to generate electricity but where is the difference? The difference is in their construction. There are certain differences:

Both the Alternators and generators are used to generate electricity. Alternators are also known as synchronous generator. Both perform same function but they are quite different in every aspect. The Alternator is used to produce three phase power from mechanical power. The first difference basically for a generator is that by generator we mean a machine which generates the DC current like DC generator it can also be an AC generator which we called induction generator or AC generator which is basically an induction motor which is working at certain conditions. Where it generates electricity while an Alternator is only meant for generating AC current there is no DC. You can understand it by the fact that it is called Alternator so Alternator means alternating generator.