For example, we write:

In what follows, we will consider the different types of C# constants (integer, real, etc.):

While C# obviously allows you to represent C# constants, C# does not have the #define equivalent of C /C++ to represent constants (this practice is now discouraged in C++, for the benefit of const). #define certainly exists in C# but is used to define symbols that have a meaning for the programmer (they are defined or not, that’s all): we exclude or not from the compilation of parts of program. #undef has the opposite effect: the symbol is no longer defined. The #define and #undef directives should be placed at the very beginning of the program.

We tell the compiler that the symbol A exists. No particular value can be associated with the symbol (unlike C / C++).

Somewhere in the program, we can therefore find:

The only difference compared to C / C++: no octal representation in C#.

An integer value can be represented, as in C / C++:

An integer C# constants can always be encoded in the long format as long as it is suffixed with the letter L (or its lowercase l, which should be avoided because of the confusion between the lowercase letter l and the number 1). C# constants 10 is therefore coded on 32 bits while constant 10L is coded on 64 bits (with zeros in the 32 most significant bits since the value is positive).

Appending or not the suffix L can have important consequences even if the compiler does not report any error. Consider the following instructions:

i and 10 being both integers (more precisely int, which is the default format), the result of the calculation i * 10 is also encoded on an int (the compiler generates code so that so). At this point, the compiler doesn’t actually care what is to the left of the = sign. Since the value ten billion cannot be encoded in an int, it results (when executing the program) a calculation error. But nothing is reported to the user: the (erroneous) result of the operation is copied to j, which therefore does not contain ten billion.

Difference from C / C++: C# is more fussy. The real C# constants are, by default, encoded in double format, i.e. 64 bits. As in C / C++, a real constant can be expressed in normal or scientific form (with E or e to introduce the exponent, always a power of 10).

Possible real C# constants are (the second form being in error):

The suffix f for floats:

A real C# constants can be encoded in a float representation that is to say on 32 bits, by suffixing it of f or F. We must therefore write (the second expression being incorrect):

Now let’s analyze the following instructions to explain the error on the second instruction:

than in float. There would therefore be a loss of information when copying the value 1.2 into f. In performing the casting, we signal to the compiler that we accept the loss of precision. So it was necessary to write :

float f = (float) 1.2; double d = 1.2f; is correct: no loss of information when switching from float to double since double is more precise than float.

Nothing prevents suffixing a real constant of d or D to specify a double format (even if a constant is encoded in this format by default, which makes the suffix unnecessary).

The m suffix for the decimal type:

A real C# constants can be encoded in a decimal representation (therefore with exactitude) by suffixing it of m or M.

A C# constants of type char contains a 16-bit number. Usually this is the code a letter (the one with this value in the Unicode table). A constant of type char can be represented in different ways:

Note that a letter is surrounded by ’(single quote). For the tank to contain this character, it suffices to describe :

Do not confuse “A” (letter A) with “A” (character string consisting of the single letter A). In computer science, these are two very different things.

A C# constants of type “character string” can be represented as in C / C++ (without forgetting that each character is encoded on 16 bits, even if this remains relatively transparent for the programmer):

but also in a character string surrounded by double quotes:

These control characters are:

As in C / C++, remember to repeat the character \ in a string. Otherwise the compiler assumes that \ introduces a control character, such as \ n. Another technique, to avoid having to repeating the \, consists of prefixing the string of @ (we speak of a verbatim string). This technique is widely used to specify a file name with directory (for example @ “C: \ Dir1 \ Dir2 \ Fich.dat”, which is equivalent to “C: \\ Dir1 \\ Dir2 \\ Datasheet”).

There is however an exception to this rule: we insert a “(quote) in a verbatim string by repeating the “. So, to copy AA” BB (with a double quote between the two A’s and the two B’s) in s, we writes:

To copy “Hello” (with a double quote at the beginning and another at the end):

In the second example (with s2), we find \\ n. The compiler detects \\ (which means that we inserts a backslash) followed by n.

The compiler reports an error if you write:

But we can write:

and the compiler inserts a line break after AAA and BBB.

WriteLine (function of the Console class in the System namespace) always causes a line break after the display. Write is used like WriteLine but does not perform a jump line after each display.

On Windows, a carriage return must be specified by the sequence \ r \ n, while on Unix, it it’s just the \ n. A technique for remaining independent of the platform (or not having to deal with these issues) is to specify Environment.NewLine:

How to use Character String Constant: 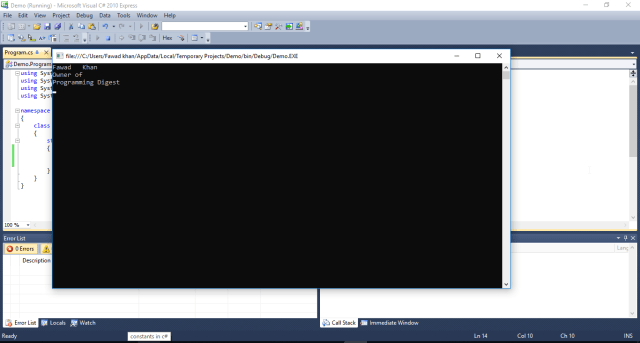 How to define and use C# constant in programming: 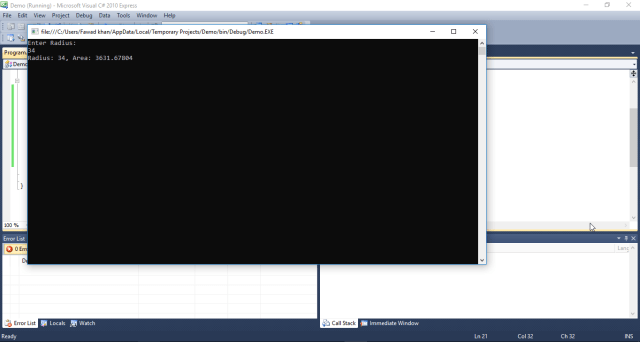 Namespace in C# with Examples