In this article we will study about Pyhreliometer and Pyranometer. As these instruments are used for the measurement of diffused radiation and beam radiation. So first we will discuss about that what is diffused beam radiation and some other important parameters that are related to it.

The scattered, reflected and refracted radiation that is sent to the earth surface from the sun in all direction (reflected from particles, molecules, clouds etc) is indirect radiation is called diffuse radiation. The intensity of the diffused radiation is represented by Id.

Insolation can be measure in J/m2which is the amount of solar radiation reaching a given area.

Terrestrial radiations are those radiations which flow throughout the year.

Actinometer is the instrument which is used to measures heating power of the radiation. There are various types of actinometers which are:

Pyrheliometer meter is an instrument which can be used to measures solar irradiance and circumference. In solar radiation it is used only to measures the beam radiation. It used thermopile to measure emf difference. Its outer structure look like a long tube projecting the image of a telescope and we have to point the lens to the sun to measure the radiance. They are commonly used for climatological research to monitor the weather and recently for solar energy research. It can measure the radiation having wavelength between 280 nm to 3000 nm. The pyrheliometer looks like a telescope. Pyrheliometer is used for climatological and weather monitoring research purpose. 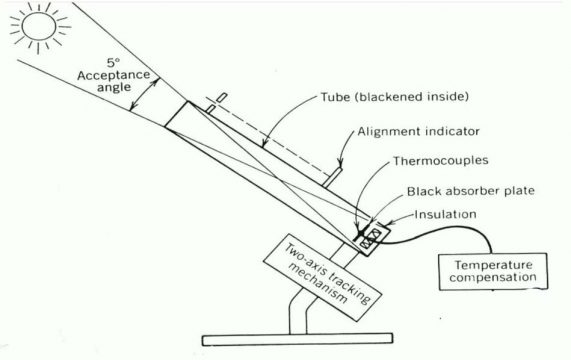 Now we want to measure the solar radiation we will set the Pyrheliometer at specific angle which will measures the radiation coming from the sun. The acceptance angle of the instrument should be close to 0 degrees as possible so that the lens can bend and focus the light into black body. Generally this angle is usually 5°.

In this tube we will set the solar radiation which is lengthy tube.

This will be used for setting the angle. It will align the instrument.

When the rays will come inside the tube there will be black plate which will absorb the radiation.

Thermopile junction is located below the black absorber plate which will be used to measure the emf. It will measures the heat from the black body which is recorded for the system.

The whole system is mounted on it with the help of this it will be able to follow the sun throughout the day. We can change the direction of the instrument according to the direct radiation.

The sunlight will enter in the long collimator tube and will incident on black absorber plate. The thermopile is in contact with black absorber plate when the black plat will absorb the heat the emf will be generated between the hot and colder surface due to the temperature difference. This emf will be used to measure the value of beam radiation.

A Pyranometer is a type of actinometer used for measuring solar irradiance on a planer surface. This word come from the greek work pyr means fire and ano means above or sky. As the above heat is measured through this instrument therefore it is known as Pyranometer. The working principal of the Pyranometer is based on the thermoelectric detection.
Pyranometer which is a radio meter with a glass dome that has hemispherical view of the whole sky. Pyranometer do not require much maintenance and are designed for long life service. Pyranometer is used for measuring the diffused radiation and beam radiation which varies with the cosine of the angle of incidence.
0° angle of incidence = full response
90° angle of incidence = zero response
60° angle of incidence = 50% response
The incidence angle ɵ is the angle between a normal to the PV module face and the incoming solar beam irradiance.
A Pyranometer measures solar radiation in Wb/m2 . Solar radiation is the source of energy. The energy flux is expressed in Wb/m2 . It include visible as well as non-visible part of the spectrum. Solar radiation can reach us directly or in other ways filtered by clouds, scattered by the atmosphere and reflected by the ground surface. Spectrally flat pyranometer is often preferred because they can be used in horizontal, inverted and tilted orientations using the same instrument with the same calibration. Pyranometer are also available with digital outputs. In that case the calculation are performed inside the instrument. It is designed to measure the solar radiation flux density (W⁄m2 ) from the hemisphere. It measures the wavelength in the range from 0.3 µm to 3 µm.

There are two types of technologies of pyranometer used with the help of which it can measures the temperature.
Thermopile technology (thermo electric pyranometer)
This type of pyranometer used collection of thermocouples which are connected in series. Where the top surface is exposed to heat flux that is the radiation from the sun and the bottom surface is insulated where there are thermal resistance layers due to which heat will not be transfer from the top layer to bottom layer. 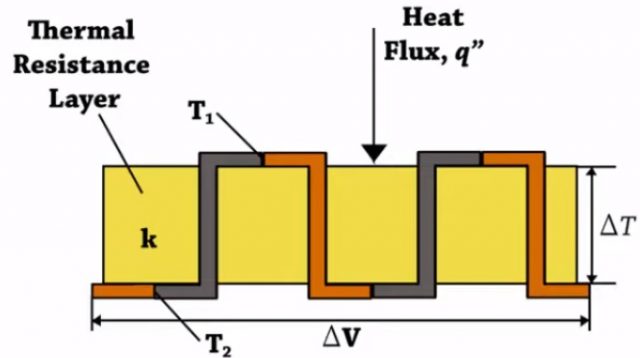 The thermopile pyranometer has a very wide spectrum which can measure the solar radiation of wavelength from 300 nm to 3000 nm as shown if the figure below. 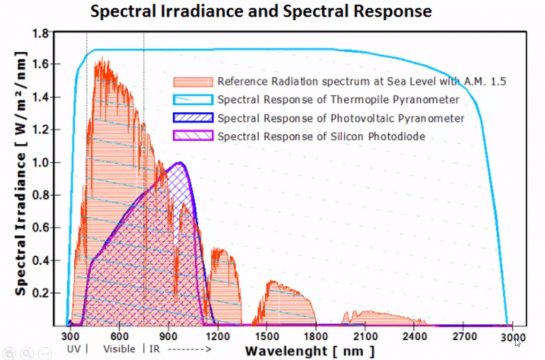 In this technology the photons are directly converted in to electricity.

The spectrum of the photo voltaic pyranometer is shown in dark blue colour which has less spectrum as shown in the above figure.

Class A pyranometer are subjected to elaborate factory testing of directional response and temperature response. Some pyranometers are heated, heating solves problem with dew and frost deposition.

The solar energy flux varies with the cosine of the angle of the incidence of the radiation. Within its view angle the directional response of a pyranometer should resembled this cosine response. 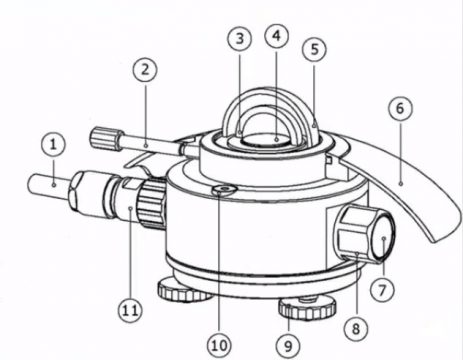 Parts of the pyranometer contains:

Below the glass domes there is black absorber which will absorb the heat coming from the sun. The circular absorber is about 25 mm in diameter.

The guard plate will save the internal mechanism of the instrument.

Inside a pyranometer we will find a very sensitive temperature difference sensor a thermopile. The thermopile is present inside the guard plate which will used to measure the temperature. We know about thermocouple which consists of two dissimilar materials which will form temperature junction which will help in measuring the temperature. When several thermocouples are combines it will form thermopile. The hot junction of the thermopile is connected with the absorber and cold junction is below it. The emf will be generated by their temperature difference. A thermopile generates an output signal proportional to the solar irradiance from the black coating to the metal instrument body. Thermopile does not require any power supply. Calculating the solar irradiance is easy. Just measure the output signal and divide it by the sensitivity of the sensor.

The levelling screw will help in to keep the instrument in level parallel to the earth.

Shading ring will help in the prevention of the direct radiation. If we want to measure only diffused radiation.

The positions of the seven thermopiles in combination with the shape of the shadow mask ensures that one thermopile is always in the direct solar beam and one is in shade so at any given moment at least one thermopile is measuring direct radiation and at least one is measuring the diffuse radiation. The SPN1 connects two data logger computers and control system. Data can be viewed remotely using delta link cloud. Delta cloud based data service.

SPN1 has wide range of application:

Electrical Network Classification on the basis of properties and response