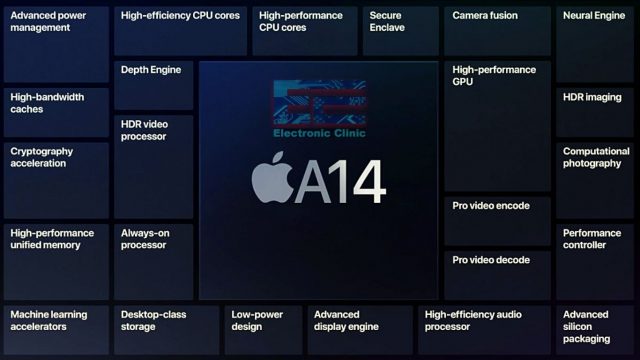 Over the last few years, Apple is leading in the smartphones chipsets market, but in 2022 the company has gone so far with the record-breaking new chipsets. We’ve seen some amazing chipsets like Apple A13, Apple A15 that made into Top 5 the AnTuTu 9 benchmarks, Apple A13 that was launched in Apple iPhone 11 Series smartphones. Let’s start with the benchmarks.

Apple A14 Bionic shows the best AnTuTu 9 scores. We can see the big jump in GPU performance. The total performance of the GPU is 285023, which is faster than the Qualcomm Snapdragon 865. The CPU also shows one of the best scores. It is 185695 which is also faster than the Qualcomm Snapdragon 865. The memory scores also show a significant boost. Apple A14 Bionic memory is faster than Apple A13 Bionic, Apple A13x. The memory scores are 118389. The Ux is also showing one of the best performances. It is 131689 which is faster than Apple A13 Bionic, Apple A13x. Total scores are above 724625. The total scores of this chipset will depend on which smartphone is using this chipset with which type of ram. Apple A14 Bionic is considerably gaining a performance boost and beating last-gen Apple A13 Bionic processor in the iPhone category. This processor can be seen in iPhone 12 Series. In the Flagship segment, it’s the best processor for gaming, camera, battery, display, and for everything.

Apple A14 Bionic lunched with the two big cores of Firestorm which are ultra-high performance cores that are clocked on 3.1GHz. The other 4 cores are based on Icestorm which is power efficiency cores. The Firestorm also has the best speeds and good set instruction architecture. There are total of 6 cores with a boost clock of 3.1GHz. Apple A14 Bionic has the latest set instruction architecture. It is considerably fast and strong enough to beat some of the latest and powerful Chipsets. Apple A14 Bionic is fabricated on 5Nm. This means Apple A14 Bionic will be power efficient and will consume less battery and will produce less heat. It is fast with the big two Firestorms. It is also L2 cache is also 8MB which is a lot faster than the other processor in the market right now. The TDP is 6Watts which means the processor will be best with the battery management. In this Apple A14 Bionic, the CPU performance is very fast and very efficient. There is 11.8 Billion transistor in this Apple A14 Bionic which is more than enough for a mobile chipset. This processor has incredible speeds and good optimization.

Apple GPU is the new architecture that they are using in the Apple A14 Bionic. The GPU is also manufactured using the 5nm technology. Which means it will also be power efficient. The name of the GPU is Apple Custom GPU. This is the fastest GPU in this lineup. The Apple A14 Bionic is fast enough to handle games like FREE FIRE, PUBG MOBILE. The GPU score is faster than the Qualcomm Snapdragon 865 which means there will be a smooth gaming experience on this chipset.

Apple A14 Bionic uses the new LPDDR4x ram with the memory frequency of 4200MHz and uses the bus of 4×16. The ram size may change according to the smartphones. The memory frequency is also going to be changed according to smartphones. The max memory bandwidth is 42.7Gbit/s which is also faster than the Qualcomm Snapdragon 865 which was used in Samsun Galaxy S21 Ultra. The max memory size is 6GB. This chipset cannot support more ram than the size of 6GB.

Apple A14 Bionic has 5G support. The Apple A14 Bionic also comes with the Wi-Fi 6 and the Bluetooth version of 5.0. This will give you better signals and better speeds. Apple A14 Bionic uses the Snapdragon X60 modem. Which is not fast as the X65 but it gives you good speeds.

Phones with A14 Bionic:

So, this was my full review of the A14 Bionic if you want to check out more articles like this then check the reviews in the menu. Also, do check out my YouTube channel. Thanks.