Ethernet network cables are used in local area network. This local environment is defined as local area network and it connects multiple devices so they can create, store, and share information with others in the location. Ethernet is wired system that started with using coaxial cable and is successfully progressed to now using twisted pair copper wiring and fibre optic wiring. This standard defined the physical layer and the MAC or media access control portion of the data link layer of wired Ethernet. These two layers are defined as the first two layers in the OSI or open system interconnection model. The physical layer consists of the following components:

Alexander Graham Bell was invented the twisted pair wiring in 1881. In 1983 Ethernet was standardized in to the standard IEEE 802.3. The Ethernet cable transfer data in either half duplex or in full duplex. The half duplex is method in which we transmit data only in one direction while in the full duplex we transmit in both directions.

The Ethernet cables that is used to connect computer to router or modem so we can have access to the internet. One end of the cable plugs in to the computer network interface card and other end plugs in to the network port of our router, modem or switch depending upon what we are using. The Ethernet twisted cables come in to two different types:

The first type is unshielded twisted pair which is by far the most common type of cable that is used today. Unshielded twisted pair consists of four pairs of colour coded wires twisted around each other. The wires are twisted to prevent electromagnetic interference or cross talk. This type of network is what most people used in their homes or business.

Shielded twisted pair is similar to unshielded twisted pair except that it has foil shield that covers the wires. This shielding adds an extra layer of protection against electromagnetic interference leaking in to and out of the cable. This type of cable is mainly used for industrial purposes not so much in a home or business. So if want to make our own custom cables for our network typically we would buy a bull roll of twisted pair cable and then we have to wire them correctly and then attach RJ45 connectors to each end. So to do this we would have to remove the protective sheathing attaches RJ45 connectors to each end. At each end of a network cable to expose the wires and this is done by using a cable stripper. The cable is inserted in to the cable stripper and then the outer sheathing is removed to expose the wires and then we would insert in to a wire crimper to attach an RJ45 connector.

The order of both standards are based on the colour of wires. The only difference between the A and B standard is the green wire is swapped with the orange. 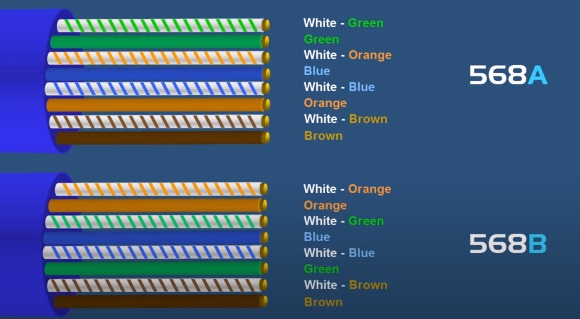 It does not matter what standard we are using both standards do the same thing but in the US most people use the B standard.

So whether we choose the A or B wiring standard if both ends of the cable are wired using the same standard then this is known as straight cable which is also known as a patch cable. A straight cable allows signals to pass through from end to end. This is the most common type of the cable that is used in the local area network. A straight cable is used to connect computer to hubs, switches, routers or modems. In other words it is used to connect dissimilar devices together. This is by far the most common cable that is used on local area network.

Categories of the Ethernet cables:

In the early 80’s Ethernet communication standard is developed for the network computer and other devices in a local environment such as homes or building. There are different categories of the Ethernet cables and the difference between these is a maximum number speed that can it handle without having any cross talk or interference. The number of these categories represent the tightness of the twists that are applied to the wires. The illustration of the categories and speed of the different twisted pair cables. The speed ranges from the lowest category which is CAT 3 at 10 MB/S and all the way up to CAT 6a and CAT 7 which has speed of 10 GB/S. 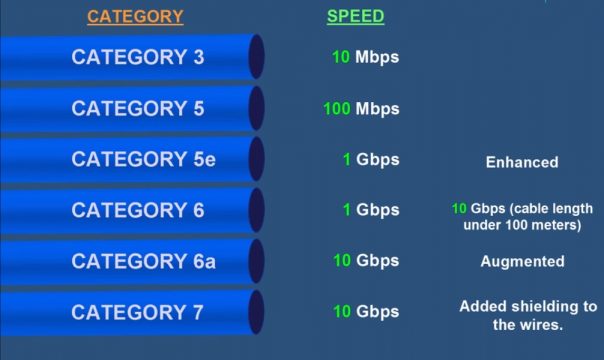 Now the most networks used today would use at least CAT 5e on their network. Because most of the network would be running at least at Giga bit/S speed. So CAT 3 and CAT 5 are slower than giga bit and are pretty much more absolute today. But if we are running a network that can handle 10 giga bit speed  we would use CAT 6a or CAT 7a on our network. But even if we have an older network that is running slower speed we can still use CAT7 because it is backward compatible. CAT7 is actually twisted pair version of CAT6a and finally the latest version is CAT8. Now CAT 8 is the ultimate copper cable it is shielded twisted pair cable which has delivery speed of 40 giga bits per second up to a distance of 30 meters which is 4 times faster than CAT6a or CAT7.

The Ethernet cable has 8 number of wires and under the 10 base T and 100 base T network out of this 8 wires, only 4 wires are used in 2 twisted pairs which are used for the data communication and 4 wires remains as spare. While in the case of the 1000 base T network or gigabit Ethernet network all the four pairs are used for the data communication. So now there are two possibilities in which can provide power over this Ethernet cable which are:

In this method the power is supplied over the spare pairs of the Ethernet cable.

In this method the power is supplied on the same over which the data is carried and this technique is known as phantom power feed technique.

There are several advantages of this technology which are:

Techniques of transferring power over Ethernet:

There are several techniques for transferring power over Ethernet which are defined under some IEEE standard. Under these standards several things are defined. Like how much power can be transferred over Ethernet cables? What should be the length of the cable over which we can freely transfer the data? What should be the maximum voltage or current which can be applied over these Ethernet cables?

So before we see about these standards let’s first of all we understand some basic PoE terminology.

The power source equipment supply power to the network devices.

The network devices which receive power over these Ethernet cables are known as the powered devices.

So now let’s find out how this PoE enabled network switch which is connected to the power device like IP camera using this Ethernet cable. If the network switch is PoE enabled then we can directly connect this power source equipment with this powered device like IP camera. So if the switch is not PoE enabled or in another word it cannot supply power to the powered device known as the Midspan. So this midspan adds the PoE capability to the standard network switch. So the data pairs will go as it is and power is supplied by the midspan over the spare.