Exceptions in java are any abnormal conditions that may occur at runtime that may be file not found exception. Division by zero exception is wrong input exception etc. on such condition java throws an exception object. Exceptions are basically java objects during the exception our program halts, hanged or dominated abnormally. to control such situations we use java exception handling.

Java Exceptions handling is used to handle error conditions in an program systematically by taking necessary actions. In exception is an event that occurs during program execution, which makes further execution impossible, while exception handler. Piece of code that gets invoked when on exception Is occurred or encountered then this allow the program to either fix. Whatever caused by the exception and output an appropriated error message and then cause program execution to gracefully terminate.

Considering the for following example showing an exception without handling it.

When the above program executes ad when the control comes to line no, 7 the java run  time system detects the attempt to divide by zero. It will construct or create a new exception object and then throws this exception and at will stop execution further and terminate the program. In this example we have not supplied any exception handler of our own, so the exception is caught by the default handler (automatically handler) provided by java run time system.

This object is thrown exception to the handler which is “catch” which executed the object having exception. In catch arrangements ArithmeticException which is subtype of class Exception.

‘e’ is the object of type “ArithmeticException which receives the exception object. In catch block we manually code with a message indicating about error then program after catch block will terminate normally.

The throwable class is the super class of all errors and exception in java language.

It is further divided to into subclasses 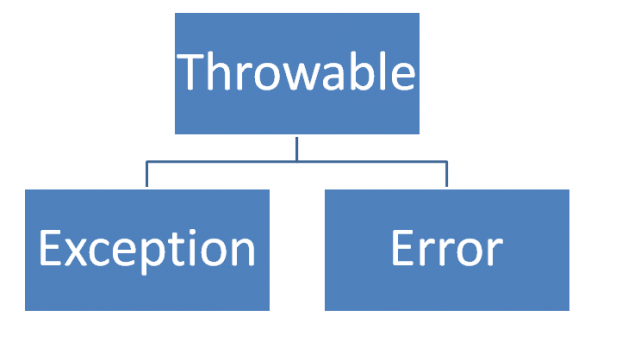 Difference Between Exception and Error:

An Exception is an abnormal condition. That occurs in a program which cause our program to terminate abnormally. when an exception occurs the jvm create an object (of class exception) that represents the abnormally condition. A program can use this object to recover from the problem.

out of memory error

Types of Exceptions handling in Java:

There are two types of Exceptions

There are two ways to handle the checked exception.

IndexOutOfBoundException( trying to access the element of array beyond its boundary) are unchecked Exception.

Example: how to use try block in java programming:

Example: how to use multiple catch block in java programming:

Consider if we type in command line C:\Users\Fawad khan\Desktop\java>java test and press enter the following output will be displayed on screen

And if we provide an extra command line argument then a=1 but the out of bound exception will be raised. Consider if we type in command line C:\Users\Fawad khan\Desktop\java>java test fawad and press enter the following output will be displayed on screen

Finally block {} is always executed if exception occurred or not generally finally {} block is used for freeing resources cleaning up closing connection (usually with DB).

Why finally block is used:

Suppose if an exception occurred in try {} block the statement below the exception will never execute so we want to execute these statements must in any case so in that situation we use finally {} block.

What does mean by freeing resource, closing connection, cleanup code:

As we discus above that the finally {} block is used for freeing resources cleaning up closing connection (usually with DB) this mean that when an exception occurs execution stops and control is given to the appropriate handler. This means that some line of code you expect to always be executed for example if you have open a file and closing statement is also in try {} block so if exception occurred the closing file statement will not execute. So this code must be write in finally block.

Example: how to use finally block in java programming:

As far as we have only been catching exception that are thrown by the java run  time system. Whenever exception raised java runtime automatically create an exception object and throw it to the appropriate handler.

It is also possible that you can explicitly throw an exception and by java run time system. The general syntax to use thrown in java is

Here throwableInstance must be an object of type throwable or a subclass of throwable. Simple types such as int, float, String cannot be used as exception. The flow of execution stops immediately after the throw statement any subsequence statements are not executed. The nearest enclosing try{} block is inspected to see if it has a catch statement that matches the type of exception if it does find a match control Is transfer to that statement if no matching catch is found then default. The default handler exception handle it.

The “throws” clause is used with the header of the method.

And must here to define the type of exception with throws clause which it might throw.

Why to use throw clause:

When an exception raised in a method and that method want that I do not want to handle with exception, this exception should be handled from where this method is called in that situations we use throws clause consider the following example

For example we have write a code in method2 which can produce Exceptions handling suppose some exception raised in method2 and method2 want that I do not want to deal with this exception it should deal method1 where method2 is called in that situation when put throws clause with method2.

Now this exception is then passed to method1 so if we want to deal or handle with this exception, then simply put method1() in try block with it appropriate handler.

If we do not want to handle it also in method1 then similarly put throws clause with method1 so that to handle this exception in a method where method1 is called.

Example: how to use Throws Exception clause in java programming:

For example imagine a situation in which a method throws an ArithmeticException because of an attempt to divide by zero however the actual cause of the problem was that an IO error occurred which caused the divisor to be set improperly although the method must certainly throw an ArithmeticException, since that is the error that occurred.

Chained Exceptions handling let you handle, this and any other situations and also let it you the calling code know what the underlying cause was IO error.

To allow chain exception java 2 version 1.4 added two constructors and two methods to throwable the constructors, which are:

The first constructor in the form, causExc is the exception that cause the current exception i-e causeExc is the underlying reason that on exception occurred.

The 2nd constructor is of the form you can specify the description at the same time that you want to specify a cause exception these two constructor are also added to the error exception and runtimeException classes.

The chained exception has included two methods in throwable class which are:

The getCause() method returns the exception that underlies the current exception if there is no underlying exception null is returned.

The initCause() method associates “causeExc” with the invoking exception and returns a reference to the exception.

Example: how to use chained exception handling in java: