Missions to the Moon– With the advent of man in this world, the endless journey of research and exploration began. An unending struggle began to unravel the priceless secrets of nature and bring new concepts into practice.  Which continues till today without any interruption. Man resorted to stones to make fire.  He brought the seas under his control by making boats and ships.  Today, there is not a single field in the world where science and technology have not made amazing progress thanks to human curiosity and research. Countries where people have recognized the importance of education and scientific progress, and followed its principles, are now in the era of development. With continuous struggle, dedication, research, and persistent endeavors, today’s developed countries have gone ahead in the field of science and technology. This amazing journey of human development and incessant search has helped to subdue everything, and today, the footsteps of human beings have conquered almost everything, whether the winds, sea, or the sky. The journey to reach the space is also a step in this direction. Although man has made many conquests of space, when man first set foot on the moon in 1969, it possibly brought space and the countless stars lying within the universe to its reach.  The dream seemed to have turned into a reality. 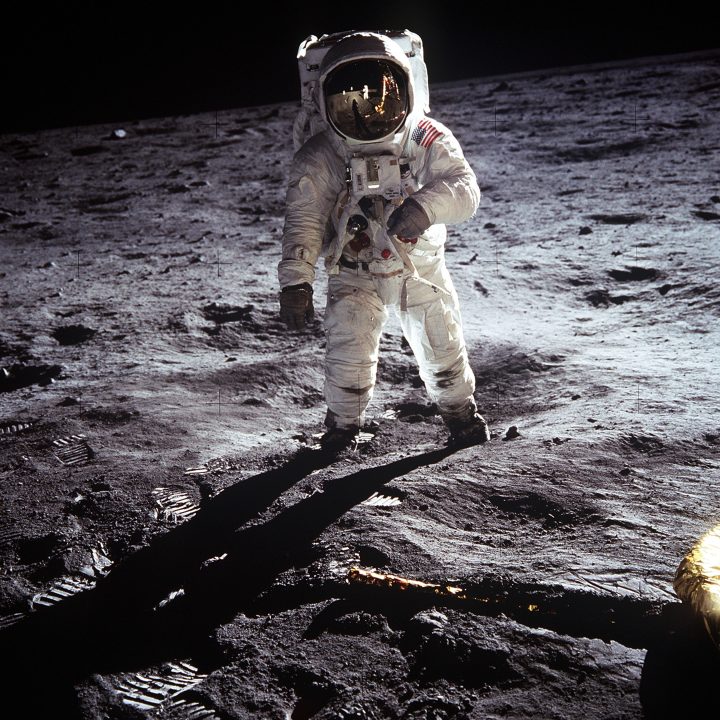 Two American astronauts Neil Armstrong (1930-2012) and Edwin Buzz Aldrin (1930-) became the first humans ever to land on the moon located at an average distance of 384,400 km (238,855 miles) from the earth. This historical event happened July 19, 1969. Armstrong became the first person to have walked on the moon, when six and a half hours later, he put his first step on the moon. As Neil Armstrong became the first human to step onto the surface of the Moon, at 02:56 UTC on 21 July 1969, around 500 million people worldwide watched this event, the largest television audience for a live broadcast at that time At the time he took his first step, Armstrong famously said, “That’s one small step for man, one giant leap for mankind.”. One of the famous American presidents, John F. Kennedy (1917 – 1963) had announced a national mission of landing human on the moon by the end of 1960s. On May 25, 1961 Kennedy delivered speech to the special joint session of the Congress, wherein he visualized his ambitious goal of landing human on the surface of the moon and then returning him safely back to Earth. His dream came true, when the Apollo 11 mission took place eight years after the unveiling of the president Kennedy’s program. The final manned mission to the moon took place in 1972, when Apollo 17, was launched.

A keen battle between the United States of America led the Soviet Union in its run of conquering the space and launching the all Important lunar expeditions, was witnessed. In the beginning, there was a fierce competition between the US and Russia (then called the Soviet Union) to overwhelm the space. The use of unhinged vast resources continued in this environment of research and competition. The US led the race by a large margin.  Since it was the Cold War era, President John F. Kennedy’s proposal to send a man to the moon was widely accepted by the nation. 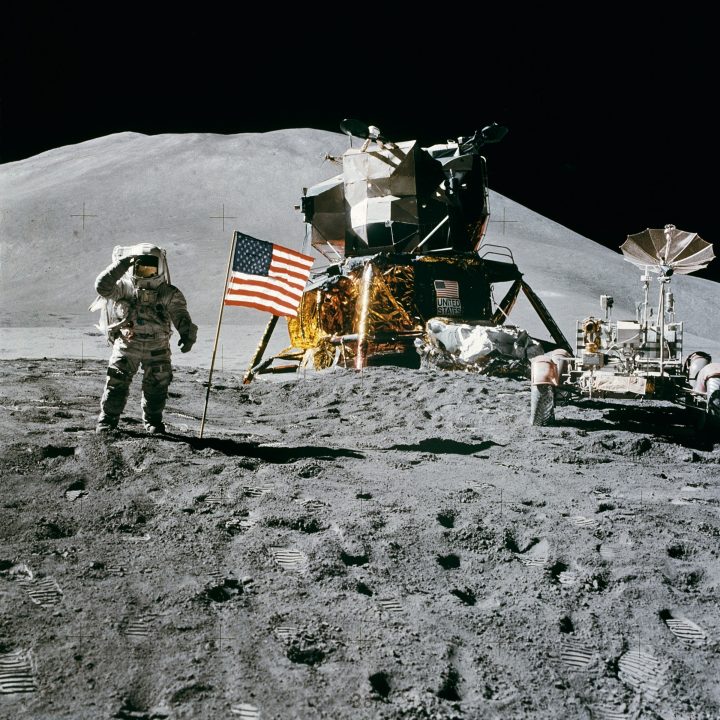 What is moon landing?

The United States is the only country in the world to have successfully conducted crewed missions to the Moon, with the last one departing the lunar surface in December 1972.

It is worth mentioning here that all the soft landings on the lunar surface took place on the “Near Side of the Moon” until 3 January 2019, when the Chinese Chang’e 4 spacecraft had to make the first landing on the remotest side of the moon.

A spacecraft has to first leave the earth’s gravity adequately to reach the moon, the rocket being the solitary pragmatic means for this so far. Unlike balloons and jets and other airborne vehicles, a rocket can continue to accelerate in the vacuum outside the atmosphere. When the target, i e., the moon gets closer, the speed of the spacecraft accelerates further as it is drawn closer to its surface due to the gravity factor. To land safely on the lunar surface, its speed must be decelerated to less than 160 kilometers per hour (99 mph). Further, it has to be ruggedized to sustain a hard landing effect. In other words, its speed should reduce to an insignificant extent so as to ensure its “soft landing”. The “soft landing” is the only viable option for humans to land safely on the surface of the moon. The first three attempts to land on moon was in the form of “hard landing”. These attempts were conducted by the U.S. to perform a successful hard Moon landing with a resistant to shock and vibration),seismometer package in 1962. All these three attempts ended in a fiasco. The first country that achieved the milestone of a hard lunar landing was Soviet Union، and this feat was performed in 1966. Only a few months later, the US succeeded in making a first uncrewed soft moon landing.

The speed of a crash landing on its surface typically tends to be between 70 and 100% of the escape velocity.

What is Escape Velocity?

It refers to the minimum speed needed for a free, non-pushed object to escape from the gravitational influence of a primary body, thus reaching an infinite distance from it. Typically, it is referred to as an ideal speed, ignoring atmospheric friction(Friction is the force resisting relative motion of solid surface fluid layers, and material elements sliding against each other)

Although the term “escape velocity” is common, it is more accurately described as a speed than a velocity, owing to the fact that it is independent of direction; the escape speed tends to increase depending on the mass of the original body and t decreases with the distance from the body concerned. In short, the escape speed actually depends on the distance that the concerned object has already traveled.

As a rocket keeps adding kinetic energy from its engines, they can escape without ever reaching an escape speed, which is accelerated continuously by its exhaust. To counter gravity’s (an attractive force which causes all the bodies to move toward the center of the earth) slowing down and to maintain its speed due to enough pushing force to provide new acceleration, (the rate of change of the velocity of an object with respect to time. Accelerations are vector quantities (in that they have magnitude and direction) to the rocket, it can achieve escape at any speed.

Generally, the sum of an object’s kinetic energy and its gravitational potential energy is equal to zero at the instance of escape velocity. An object with escape velocity is deemed to be neither on the surface, nor in a closed orbit. In other words, at a given escape velocity, the object will move away from the other body, in case of an infinite distance,  continually slowing down asymptotically (i.e., approaching but never intercepting an object), and never coming back again. At infinite distance, Speeds higher than escape velocity maintain a positive speed. It has to be noted that the minimum escape velocity presumes that no friction would increase the required instantaneous velocity to escape the gravitational influence, and that there will be no future increase speed or external slowing down.

For Earth’s Moon, the escape velocity is 2.38 kilometers per second (1.48 mi/s). A landing rocket usually causes a change in velocity, which was being carried into the space by the spacecraft. As the moon with the thickest atmosphere, landings on Titan may be completed by using atmospheric entry techniques that are generally lighter in weight than a rocket with equivalent ability.

While going on with the moon expeditions, initially many uncrewed missions had fizzled out. Moreover, several of the landing missions were able to touch the lunar surface, but all had a crash landing, e.g., Luna 15, Luna 18, and Luna 23. Whereas the US Surveyor 4 lost all sorts of radio contact just moments before its landing on the moon.

So far, a total of twelve astronauts have stepped on the surface of the moon. Between 20 July, 1969 to 14 December 1972, NASA six missions were sent to moon and a total of twelve men have landed on the Moon. So far six NASA missions This campaign started with Neil Armstrong and Buzz Aldrin on Apollo 11, and ended on 14 December 1972 with Gene Cernan and Jack Schmitt on Apollo 17. The last man who stepped off the moon surface, was Cernan. On December 19, 1972, the last three astronauts who traveled to the moon, landed back on earth safely. Ten days earlier, the Apollo 17 mission had kicked off from Cape Canaveral, Florida.

There were six more missions sent to land on moon after the historical Apollo 11 launch in 1969. Of these six missions, five landed successfully at the moon surface. A total if 12 men were able to tread on the moon’s surface. However, the future Apollo missions were abandoned indefinitely in 1970. Meanwhile, Apollo 17 became the last mission to have been departed to the moon in 1970. The main reason behind the cancellation of moon endeavors was money, because it involved huge financial costs, which was difficult to afford even by a financially strong economy like the USA.

The Apollo 11 Moon landing in July, 1969 was a huge feat, which reflected an unending saga of human endeavors, engineering and unbelievable scientific  advancements. It was the moment, that the world was waiting for since long.

Between 1968 to 1972, various manned missions were carried out by the United States in the shape of Apollo Program. The first manned mission to have entered the earth’s orbit was Apollo 8, and the mission was carried out in December 1968. Then the mission of Apollo 10 was launched in May 1969. Starting from Apollo 11, humans were safely and successfully landed on the moon through six missions in July 1969.As a result of these missions, Neil Armstrong emerged as the first person to walk on the moon. Another mission in the form of Apollo 13 was also aimed at landing on the moon, however, it was confined due to some defectin the spacecraft. Luckily, the nine crewed missions carried out during the period returned back securely to the Earth.

Initially, the United States concentrated primarily on the crewed missions to the moon, whereas the Soviet Union resorted mainly to the uncrewed missions. As a result of these missions, that rovers were deployed which collected samples of moon’s surface. Three rover missions were conducted, of which two were successful, and eleven sample return flights were attempted with three of them to be successful.

Chronologically, so far, the following nations and entities have successfully launched lunar missions: the Soviet Union, the United States, Japan, the European Space Agency, China, India “Chandrayaan 2”, Luxembourg, Israel, and Italy. So far, the Moon has also been visited by five spacecraft not aimed it studying it.

Though apparently the missions to the moon have been disbanded temporarily due to huge costs involved, yet research and scientific work on the projects have continued uninterruptedly. Apart from USA, countries like China and India are also making great inroads in these projects. We can rightly be optimistic about the restart of such missions pretty soon.

It was quite a befitting finale to the Apollo program, which was the first mission to have successfully landed on the moon surface. The Apollo program spread a message of peace throughout the mankind, and it was satisfactorily closed down on a note of international cooperation and enduring peace.