Operators and Math Functions in C#:

Example: how to use simple operators in c#: 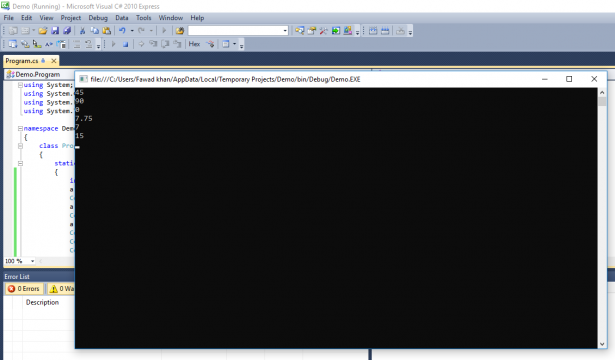 The variable a has the value 20. 25 is added and the result reassigned to the variable a. The Console.WriteLine(a); shows the result. The next ones run according to the same principle

Operations. The last three lines demonstrate the division with floating point numbers and whole numbers and the modulo operation. 155.0 / 20 gives the result 7.75, which in the German

Version is output as 7.75. 155.0 is a literal of the Data type double. As a result, the 20 that is of type integer is implicitly converted to double, and only then is the division carried out. The result is of type double. 155 /20 returns the result 7, because all operands are of the integer type and all decimal places in the case of an integer division be cut off. With this division, the rest remains 15, which is determined in the last line with the module operation becomes.

Example: how to use binary and bitwise operators in c#: 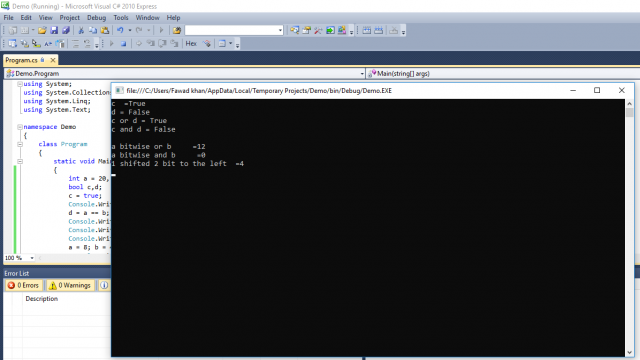 The first part of the program deals with logical operations executed with only the values ​​true and false. In of the statement d = a == b, the first equal sign is a Value assignment to d that will be executed after the expression a == b has been evaluated. The comparison a == b results in false, since a and b are different from each other, because c value is true, the OR comparison yields true, while the and comparison yields false. The second part of the program  demonstrates bitwise connections, the 8 become dual 1000 and the 4 dual 0100 comparison.

The mechanism of bit shifting can be found in the same way, 0001 shifted 2 bits to the left results in 0100, which is the decimal 4 corresponds.

Is logarithms Log natural logarithm. Logarithm to base e Log10 Logarithm to base 10 Sin Sine Asin Arc sine Sinh Hyperbolic sine Cos Cosine Acos Arc cosine Cosh Cosine hyperbolic Tan tangent Atan Arctangent Tanh Hyperbolic tangent Round Round. the numbers Ibis 4 are rounded down. Above it is rounded up Ceiling Round up Floor Round off Max Max (a,b) is the larger of the values ​​a and b Min Min (a ,b) is the smaller of the values ​​a and b Sign Sign. Sign (a) is I if a> =0 and -1 if a <0

Example: how to use math functions in c#: 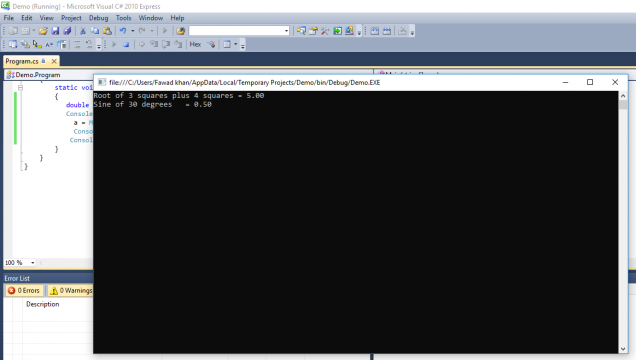 The math functions and constants belong to Class Math. Math.Sqrt computes the square root. The payment 3.0 and 4.0 are written with a decimal point. Thereby are they are of type double and match the definition of the function Sqrt. The angle functions expect values ​​in radians. Therefore a conversion with 30.0 * Math.PI / 180.0 must take place, before the sine of 30 degrees can be calculated.