Scripts and Functions in MATLAB:

scripts and functions in Matlab- In this tutorial, i will be discussing the difference between script and function. Whenever you are going to perform a specific functionality by using MATLAB code you either go for a MATLAB script or a MATLAB function. MATLAB script is the simplest form of the MATLAB file in which you can write your MATLAB code in any way allowed by the MATLAB rules. I am using MATLAB 2021a so to generate a script you go on this option new and click this script. 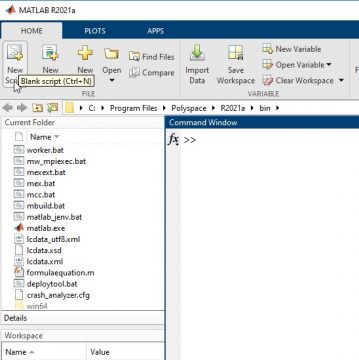 So by clicking the script a blank file will be openedand in this blank file you can write your own code in any format allowed by MATLAB coding rules. 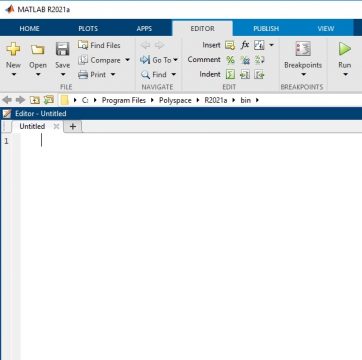 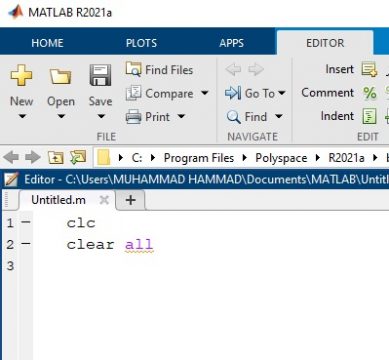 Now the next command is the sum of these three variables so that is sum is equal to:

The next command is the product:

Now it is a simple code which is adding three numbers and multiplying the same numbers and saving the values in these two variables named as sum and product. 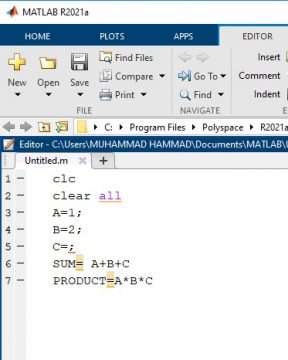 Now before running the scriptwe need to save this file so you simply go to the file and click save. 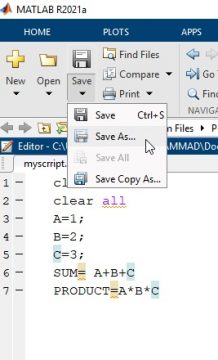 Now a dialog box will appear and select any directory where you want to save i am going to the default directory which is MATLAB in the documents folder and one important point is that i can save it by any name of my own choice. So i am writing here myscript.m and click on the save button now this file is saved. 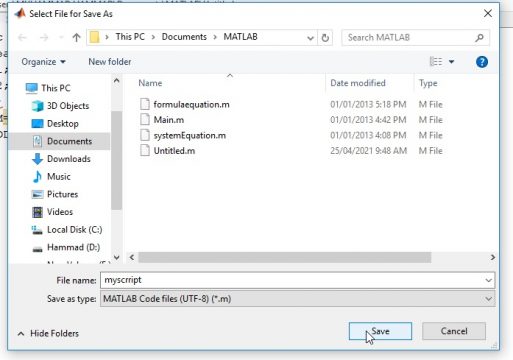 Now I want to run the code we will simply click on the RUN or we can also run the program by pressing F5 button. 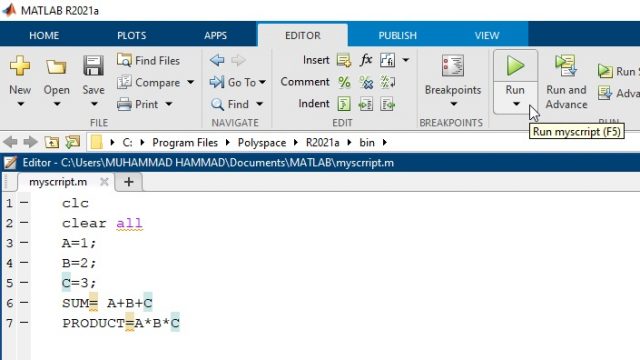 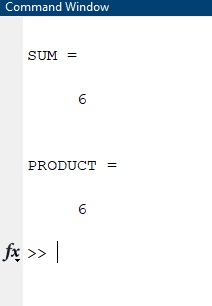 Now if i want to generate the same functionality by using MATLAB function.i will simply go to the new option and select function. 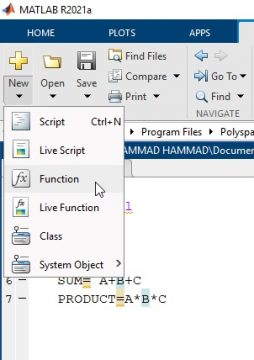 You can see that MATLAB has provided a built-in template to write the function so what is the main concept of function.

Since we are going to perform SUM and product of three variables. So now in order to proceed for this functionality we will insert these three inputs as the inputarguments and input arguments will be entered in the function and replace the inputArg1,inputArg2 with name a,b ,c.

You can enter any number of input arguments over here. So on the left side of this where it is untitled 3 is written. So this is basically the function name let me write here myfunction so this is the name of the function. 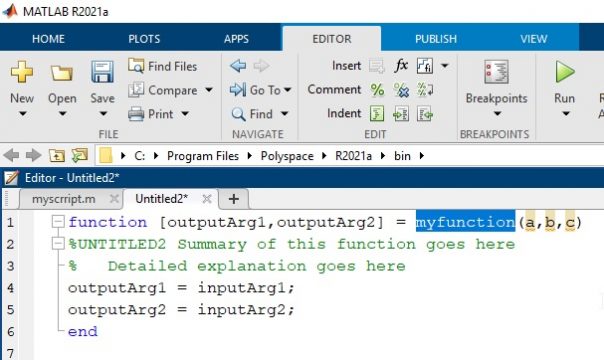 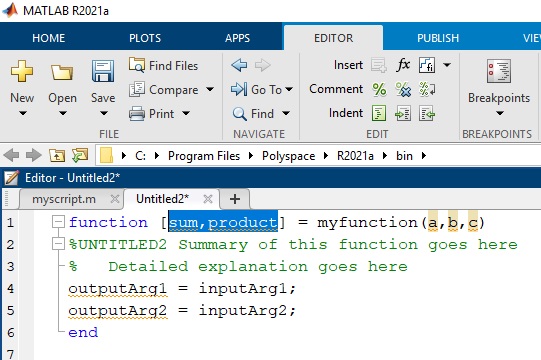 Now this is the function de finition now let us write the functionality because it is function and the main difference between script and function is that function takes the input arguments externally. So we do not need to define a, b, and c inside function we will supply the values of a, b and c from outside and this function will return the sum and product in the form of output arguments. So here we will simply erase these three lines of the script. 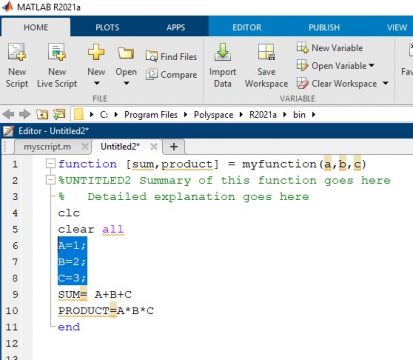 So we will directly write:

This is the completed function. 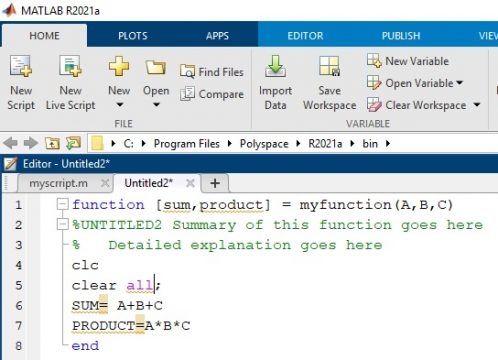 So here it is myfunction so MATLAB automatically suggests you and recommends you to save this file by the same name.You can see that myfunction is written.So you simply click save. 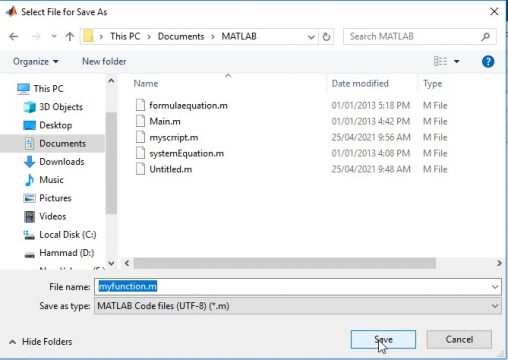 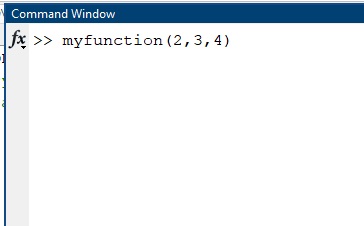 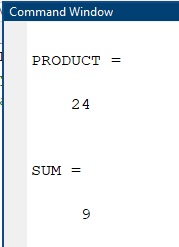 Our function name I am going to call Pythagoras and when choosing a function name. Your main consideration is does this function name already exist in MATLAB to find out you can type exist then your potential function name that you would like to use and if you get a value of zero returned that indicates that this name is not already being used as a built-in function in MATLAB so you should be good to go to use that name. for example we are using the Pythagoras name for the function now to check it we will write in the command window:

As we have received 0 which shows that this function is not used before or it non exist in the predefined functions of the MATLAB.

Now we are going to calculate the hypotenuse based on the Pythagoras theorem. So our hypotenuse C is equal to the square root of a squared plus b squared.

In the MATLAB we will write this command as: 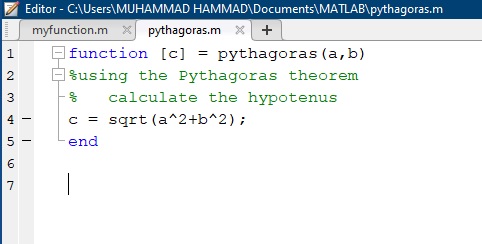 So now what I want to do is I want to be able to calculate the hypotenuse based on two given side lengths so this is how we would call the function in the command window you would type in the function name and then you enter in your two inputs a and b. So let’s say side length of a is 3 and the length of side b is 4.

When I press enter I will get a value of five which is what I’m expecting based on the Pythagorean theorem. 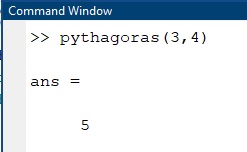