Thread protocol is an open standard protocol for home automation. In this article we will discuss Thread protocol, its features and why it is one of the best choices of protocol for home automation and other such IoT projects. The Internet of Things has gained immense popularity over the last few decades, and its potential continues to grow.  According to a study by ARM, it is predicted that the number of connected operational devices in IoT will reach up to one trillion by the year 2035.  IoT and automation have acquired significance in various fields such as industrial, manufacturing, retail, healthcare, and more.  One such field of IoT that has become very popular is home and building automation. With the increasing demand for home automation, there was a need for a standard networking protocol and technology stack that was reliable, secure, power-efficient, and compatible with other existing networking protocols.

Thread at its core is an ipv6 based peer-to-peer mesh network meaning devices do not need to communicate with a central hub in order to communicate with each other for the purpose of a smart home that does not really mean much because you still need a way to communicate with them. However the benefits of the ipv6 design is actually a very good performance and reliability. It takes all the best aspects of zigbee, Wi-Fi and Bluetooth and mashes them together resulting in thread. The thread group was founded back in 2014 by consortium of consumer technology companies including nest Samsung silicon labs QUALCOMM, Yale and others with apple joining in 2018. They set out to make thread become the industry standard protocol for smart homes. 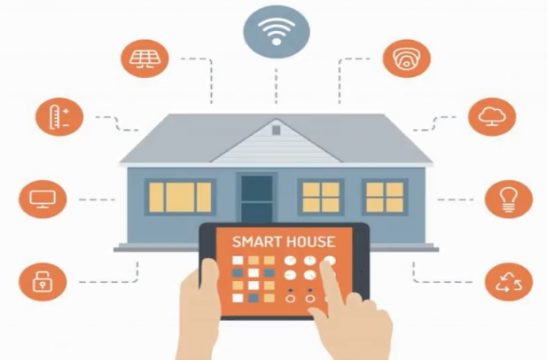 The Thread protocol is an IPV6 based wireless networking protocol specifically designed for low-power connected devices in the home automation space. It is based on IEEE 802.15.4 and 6LoWPAN protocol and uses Advanced Encryption Standard.  Thread protocol is mesh-based protocol. A Thread-mesh network can support up to 250 nodes.  This protocol was released in July 2015 with the formation of the Thread Group Alliance. This group included companies like Google, Qualcomm, Samsung, ARM, and Silicon Labs.  The Thread group was created with the mission of educating, marketing, and promoting the use of the Thread networking protocol.  Thread is now backed by industry-leading companies including Apple, ARM, NXP, Nest Labs, OSRAM, Qualcomm, Nordic Semiconductor, Siemens, Silicon Labs, Schneider Electric, Somfy, and Yale Security.   Let us now discuss the architecture and network stack of the Thread protocol and understand how it is designed to meet the needs of a home automation network.

A thread network will be comprised of two different devices. They can either be routers or end points routers as the name suggests can route information throughout the network. These will be remains powered devices like smart plugs, light bulbs smart switches etc end points are typically going to be battery powered devices and they cannot transmit any data past themselves only back and forth to the router. They are connected to this will be things like contact sensors motion sensors etc. The big benefit of thread is that is designed to be a self-healing and self-maintaining network. So as you add or remove devices or even move them around physically the network will automatically adjust. Let’s say you have a contact sensor on a window and are connected to a light strip you have nearby in a regular mesh network. If that light strip loses power the contact sensor is also disconnected from the network but with thread the contact sensor will then automatically connect the next nearest router device. Let’s say a smart plug and the network will continue running. 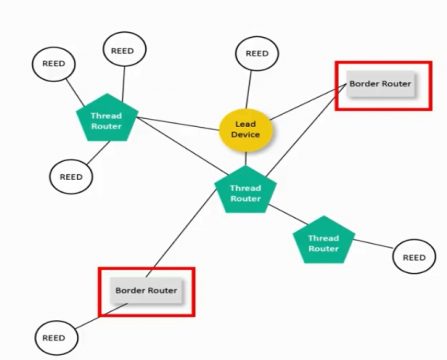 The communication within this network is based on 802.15.4 and it forms a self-healing mesh. The various devices that comprise a thread network architecture include the following.

The last device that is essential to a thread is a type of router called a border router. This is a device that connects your thread network to the rest of your home network. This is kind of like a hub and other smart home protocols. All thread-based devices have a Bluetooth chipset as a backup.  So if they board a router were to disconnect. They will then revert to Bluetooth connection it is a little unclear though which Bluetooth device. It would connect to if you were initially set up as a thread device thread was of course designed specifically for smart home applications so battery life and power consumption were top priorities for all of the various battery operated. 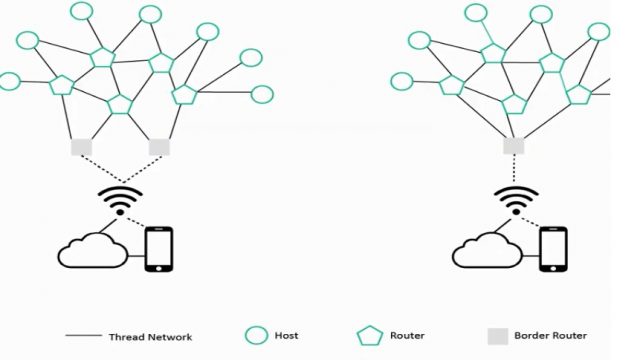 The lead device is responsible for managing a registry of assigned router IDs. It also controls the request for REEDs to be promoted to routers. It uses the CoAP protocol and its state information is stored in the thread routers. This allows self-healing of the mesh in case of a failure.

These manage the routing services of the mesh and never enter the sleep state unless they are allowed to be downgraded to REEDs.

Finally, there are REEDs or Router Eligible End Devices. They are essentially the leaf nodes or endpoints of the network. They are not responsible for routing or joining devices to the network unless promoted to a router.

This is a diagram of a typical thread stack as compared to a typical TCP/IP stack that uses OSI (Open System Interconnected) model. Thread network stack uses the IEEE 802.15.4 for the physical and MAC layers. It operates in the 2.4GHz frequency band and supports radio modules like Zigbee and WirelessHART. In the higher layers, as it uses 6LoWPAN, it has the benefits of header compression, IPV6 addressing, and fragmentation scheme. Additionally, the thread has two more stack components: Distance Vector Routing and Mesh link establishment. Thread uses UDP with IP routing, which offers faster packet delivery.

Smart home devices of which there are many end point devices have the option to utilize a function called sleep interval which helps tremendously with battery life. This means that it will manually ask its parent if there is any new information rather than having to have that data come to it automatically. This does not mean that there will be any lag when the device detects anything though if a contact sensor opens it will then immediately notify the apparent device of this new information imagine a security watch tower the sensor at the furthest point does not have his radio on all the time connected to the control tower instead they will do a radio check to the control tower every so often to get a quick status update but if they see anything they will then immediately radio in the news from their end.

Thread also allows the ability of a partition network essentially if you have a large home you can have independent thread networks each with their own border router that work independently of one another.  If you are able to improve the network connection and reconnect them then they will merge into one big thread network and one of the border routers will just be demoted to router.

Imagine you have a three level house and you have thread devices and a homepod mini in the basement and you have a similar setup in your bedroom on the second floor but nothing in the main floor of the house. The thread network is not strong enough to connect between the two levels. So they work independently but then if you would introduce a router device like a light bulb on the main floor. It would then allow the thread network to continuously flow through all of the devices. So that is a deep dive into thread itself but why does it matter in smart homes why can’t we just keep using zigbee or z-wave. Zigbee and z-wave for all intents and purposes are fine and do a decent job. There are also mesh based networks but unlike thread they are not self-healing nor are they ip-based zigbee has been a bit of a mess since the completely open standard and manufacturers will ship their own versions of it with their own hubs that are not interoperable which is generally just a terrible experience. Z-wave has a benefit of being a closed system in that all z-wave devices are compatible with one another. However the company that owns them basically has a monopoly on the hardware and software keeping prices high which is something that even their executors have admitted is a common complaint.

Why to choose Thread protocol?

So with all the other protocols out there that are already pretty good why is thread going to be the one that everyone chooses to implement. I will tell you the reason why thread is going to be important the smart home world is basically because the big boys want to use it smart homes have become increasingly main stream but are still quite limited and are fairly nice on a grand scale between each company having their own zigbee hub and z-wave not quite getting along with others. The landscape is basically a bunch of small to medium-sized companies trying to determine what the best path forward is and realistically for an average consumer it is not a great experience. When apple and google both decide on a path forward the rest of the industry follows they are simply too large to ignore and they have basically chosen thread to be that path forward between thread and chooip which will working unison. You would be silly as a smart home manufacturer not to follow that same path obviously this will be a multi-year effort on all sides at the moment there are only a handful of thread supported devices homepod, mini nanoleaf, essential bulb and light strip viv contact sensor and eu smart plug. I suspect that with the next couple of years thread will be the main wireless protocol for smart homes and i would even expect Wi-Fi routers to include thread as well does this mean your current stuff is obsolete not necessarily as long as it works. i don’t see any reason why it will stop working and it will most likely work in conjunction with thread devices at an ecosystem level basically the same way it is working right now.

Now, let us understand the features of the Thread protocol that make it the best-suited protocol for home automation networks. As stated by the Thread Group, the protocol was designed to be simple for customers to use, always secure, power-efficient, an open protocol that is compatible with IP, based on a robust mesh topology with no single point of failure and to be able to run over the existing 802.15.4 radio technology. Thread was designed to support a wide variety of applications in the home, such as appliances, climate and access control, lighting and energy management, safety, and security. With these features, several top companies use the Thread protocol to develop their home automation and IoT solutions today as the Thread community continues to grows.