Touch screens are everywhere not only in smartphones but in ATM machines, super markets and even in aeroplanes. All the touch screens are not same. The old screen can be pretty tough to use. Sometimes it feels more like a push really hard screen instead of touchscreen. On other hand certain computer monitors and smart phones are really responsive to many different touch patterns. There are lots of different technologies out there but they are all trying to achieve the same goal sending precise electrical signal from specific locations on the screen. Touch screen are of five types and which one of the type your phone have so let us discuss in this article all the five types and its advantages and disadvantages along with their fields of applications. Some touchscreens use ordinary or specially coded gloves to work while others may only work using a special stylus or pen. The user can use the touch screen if the software allow to control and react what to be displayed.

We will first discuss on the resistive touchscreen panel the resistive touch screen where you have to physically push and bend the screen to work. A resistive touchscreen consists of several thin layers. The two transparent layers facing each other with a thin gap between the top layer is made from flexible and transparent material such as polyethylene which is common plastic used to make things like a soda bottles. Just beneath it is a similar resistive layer which is made of something more rigid like a sheet of glass on top of its substrate. One layer has conductive connections along its sides the other along top and bottom a voltage is applied to one layer and sensed by the other when an object such as a the two layers to become connected when fingertip or stylus tip presses down on to the outer surface at that point the panel then behaves as a pair of voltage dividers in which switching occur rapidly between each layer. When the pressure is increased the position of pressure on the screen can be detected. 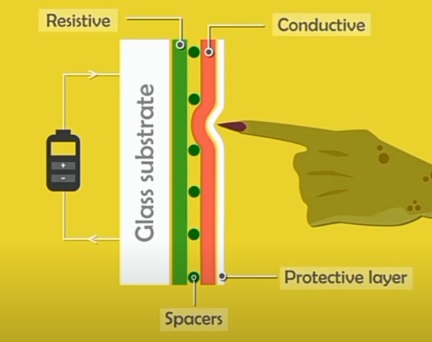 It is used in hospitals factories and restaurants and due to its high tolerance for contaminants and liquids. A major benefit of resistive touch technology is that it requires less pressure for touch to be sense and its low cost. Since they may be used by using anything rigid as a finger substitute or with gloves.

Disadvantages of the resistive touch screen:

The disadvantages include the need to press down in a risk of damage by sharp objects resistive. Touchscreens also suffered from poorer contrasts due to having additional reflections that is glare from the layers of material placed over the screen.

Ultrasound surface wave acoustic touchscreens operate by tracking ultrasonic sound waves to stimulate neural receptors in the human body. It uses acoustic radiation force which is force generated when ultrasound reflects off skin. When the ultrasound is focused on the skin surface it induces a shear wave in the tissue displacement from the wave triggers Meccano receptor and that induces capting sensation. It is most safe form of feeling because most of the ultrasound energy reflects off the skin. The fact that human skin is so much denser than air it uses an array of ultrasonic transducers and signal processing algorithms to create focal points of the ultrasonic energy on user palms or fingers.

They are often used in the medical field casinos amusement facilities public facilities and financial institutions.

Disadvantages force acoustic wave touchscreen panels can be damaged by outside elements contaminants on the surface can also interfere with the functionality of a touchscreen.

There are different types of capacitive touch screen and they can vary from device to device. But one basic design consists of glass containing a grid of hair thin lines of conductive indium metal tin oxide. The human body is also an electrical conductor touching the surface of the screen results in a distortion of the screens electrostatic field measurable is a change in capacitance different technologies may be used to determine the location of the touch the location is then sent to the controller for processing touchscreens that use silver instead of indium exists as AI tio causes several environmental problems due to the use of indium the control there is typically a complementary metal-oxide-semiconductor seamless application-specific integrated circuit ASIC chip which in turn usually sends the signals to a CMOS digital signal processor DSP for processing. 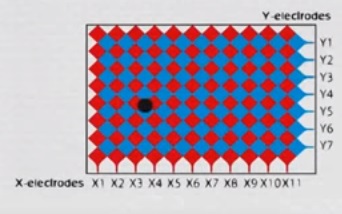 Advantages of the capacitive touch screen:

Disadvantages of the capacitive touch screen:

The disadvantage especially affects usability in consumer electronics such as touch capacitive smartphones and tablet PCs in cold weather when the users may be wearing gloves it can be overcome with a special capacitive a special application glove or stylus with an embroidered patch of conductive thread allowing electrical contact with a user’s fingertip.

In this basic technology only one side of the insulator is coated with a conductive layer a small voltage is applied to the layer resulting in the uniform electrostatic field. A capacitor is dynamically formed when the human finger touches the uncoated surface due to which the capacitance is change and the sensors controller can determine the location of the touch indirectly. The four corners of the panel in which the sensors are attached to every corner as it has no moving parts. The parasitic coupling results in false signal due to which it is moderately durable and has limited resolution and needs calibration during manufacture it is therefore most often used in simple applications such as industrial controls.

Capacitive touchscreen is made up of two glass layers and they act like a capacitor this creates an electric field between those layers which is very important for this screen to sense your touch so what happens is that the small amount of current is transferred from the finger when you touch the screen. This transfer leads to a small voltage drop at the location of the touch this change is automatically sends to by an on-board processor and then the coordinates of the touch is determined same as with the resistive touchscreens and after that the action specified by the touch is performed.

It uses glass layer and hence look sharper and brighter it is highly sensitive and hence does not require stylus it supports multi-touch it offers high clarity and resolution and is completely sealable.

The disadvantages of the surface capacitive touch screen is that its work is based on conductive nature of human beings and hence does not work when user wears gloves it is expensive compared to resistive touchscreen.

Projected capacitive touch screens have X & Y electrodes forming all over the screen which creates a matrix of them this matrix allows to determine the location of the touching so when you place your finger on the screen some amount of electric current get transferred to your finger and this causes the value of the electrostatic capacitance between x and y electrodes to change this change is detected by the processor and between which two x and y electrodes this change occurred determines the touch location sounds complicated right now. worries I am here to solve it just imagine that there is a normal grid with a x-axis and y-axis and I have put a dot with a pencil in some location of the grid and it is very dark just now linking the x and y digits together forming a chord now this darkness of the dot relates to the constant electrostatic capacitance between x and y electrodes  then if I place my finger on that dots some of its led will stick to my fingers and this process relates to the transfer of some electric current to your finger in capacitive touchscreens this process will fade that dot to some extent and this change will immediately be detected by the processor because this was just one dot and there are many more dots with the same darkness which are untouched so miners changing one of them will be easily detected by the processor and this is how a projective capacitive touchscreen works.

Now the disadvantages of projected capacitive touchscreen are it works based on conductive nature of human beings and hence does not work when user wears gloves it is expensive compared to resistive touchscreen glasses more prone to breaking and hence requires tempered glass as touch screen protector.

All the five types have been discussed but more three types are there but they are under development and their use is very rare so now let us discuss them briefly.

An infrared touchscreen uses an array of XY infrared LED and photon detector printers around the edges of a screen to detect the disruption in the pattern of LED beams. The horizontal and vertical patterns beams cross each other in these LED. This helps the sensors pick up the exact location of the touch. Any opaque object including pen or gloved finger can be a major benefit of such a system. It is generally used POS systems and in outdoor applications which cannot rely on a conductor such as a bare finger to activate the touchscreen unlike capacitive touchscreens infrared touchscreens do not require any patterning on the glass which increases durability and optical clarity of the overall system infrared touchscreens are sensitive to dirt and dust the can interfere with the infrared beams and suffer from parallax and curved surfaces an accidental press when the user move a finger over the screen while searching for the item to be selected.

They are made up of glass from both the top and the bottom. They are the touch screens which are based on light beam interruption technology. The working is very easy to understand so just don’t worry therefore what happens is that there are LEDs placed on both the horizontal and vertical sides of the screen and for both the sides of LEDs light sensors are placed right in front of them on the exact opposite side of the diodes so when the device is turned on this LEDs start emitting light and the sensor start to detect this when you touch the screen however means of light break and the sensors corresponding to that LED does not receive light and this change is detected by them here interestingly two beams of light break down through one touch one from the horizontal set and the other from the vertical set hence the touch makes two sensors stop receiving right this provides x and y coordinates for the screen which is determined by the processor and lastly the action specified is performed that’s it and surprisingly this was all that was needed for infer that’s green to work. 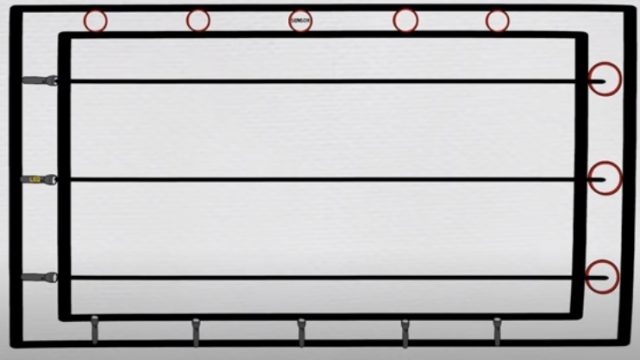 Advantages include can be used with blood or wet fingers highly durable and suitable for large panels.

These touchscreens are a relatively modern development in touchscreen technology in which two or more image sensors such as CMOS sensors are placed around the edges mostly the corners of the screen infrared back lights are placed in the cameras field of view on the opposite side of the screen a touch block some lights from the cameras and the location and size of a touching object can be calculated this technology is growing in popularity due to its scalability versatility and affordability for larger touchscreens.