Network types depend upon the how large they are and how much an area they cover geographically. Most people who have a basic knowledge of networking are familiar with terms such as LAN and WAN. But in addition to those there are a few more network types that a lot of people are not familiar with. So, in the Network types we are going to start with the most popular network which is LAN.

LAN stands for local area network a local area network is group of computers, servers, switches and printers which are located in the same building such as an office or in a home. LAN is the most common type of network and this is the reason while studying the network types we are first introduced to the LAN. It covers a small area. In other word close proximity to each other. The most common type of the LAN is Ethernet where the two or more computers to Ethernet cables using a switch. In LAN one computer can become a server and the remaining computer is called clients. The clients will take and give data to the server.

The work stations is basically computers either client or server.

In file server if we place files at the remote location like if we place data in the computer from where we can access the data. We will request data from that computer and it will provide us the data.

The gate way provides communication to the particular computer.

The LANS are connected through the coaxial cable with the computers. This is communication channel which will provide us communication.

Advantages of the LAN:

PAN stands for personal area network now this is type of network which is used in on personal level. It is a small level that is used for connecting the devices such as smartphones, tablets and laptop. They connect to each other by using wirelessly technologies such as Bluetooth, Infrared and near field communication. But they can also connect by used a wired connection such as a USB cable. Small files like photos, music can be transfer through the private area network. For example sharing of the data through Bluetooth between mobile phones is an example of personal area network.

The range of the PAN is up to 10 meters. PAN may include wireless mouse and keyboard, TV remotes, wireless printers and Bluetooth enabled head phones.

A CAN stands for the campus area network that joins two or more LANs together within a limited area. So for example a CAN could be a university that has multiple building in the same general area that are connected to each other to form a larger network. So these building could be different departments on a university property with each building have their own LAN in their department and then the building is connecting to form a campus area network.

MAN stands for a metropolitan area network now this is a larger network than CAN. It is a network that spans over the several building in a city or towns. MAN is typically connected using high speed connection such as fiber optic cable. It is high speed network that gives the ability for sharing and resources within a city. Characteristics of MAN:

Advantages of the MAN:

MAN used the fiber optics so the speed of data can easily reach up to 1000 Mbps. Files and data bases can be transferred fast.

SAN stands for the storage area network which is a special high speed network that stores and provides access to the large amount of the data. It is dedicated network that is used for data storage. This network consists of multiple disk arrays, switches, and servers. One of the main reason for using the a SAN is because SAN are not affected by network traffic such as bottlenecks that can happen in local area network. SAN is not particularly a part of the local area network it is partitioned off and it is a network all by itself. 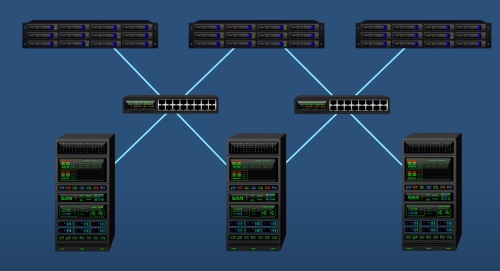 WAN stands for wide area network which is the largest type of the network. A WAN includes LANs, CANs and MANs. It is a network that spans over a large geographical area such as country continent or even the entire globe. A good example of a wide area network is the internet.

WANS are owned by third party service providers a company wanting to connects it geographically dispersed LAN must subscribe to WAN service provider such as telephone company to use or lease the carrier services. A company uses the data links provides by these service providers to connect the remote locations to each other or to access the internet liker Ethernet LANs traditional WAN protocols operates at the physical and data link layers.

Each one technology such as the point to point protocol or PPP or frame relay using a different layer to frame format and provides different option for reliability and error recovery. 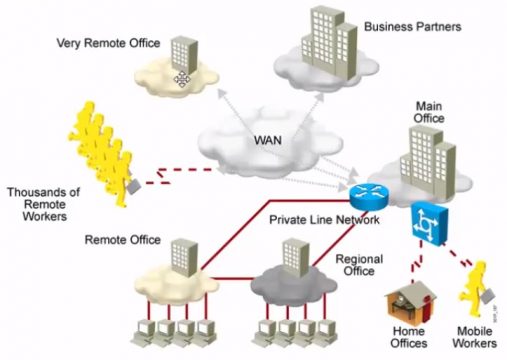 VLAN stands for virtual area network in a VLAN network the computers, servers and other network devices are logically connected regardless of their physical location. So even if these devices are scattered in different places it would not matter because VLAN can logically group them in to separate virtual network. The purpose of the VLAN is for: 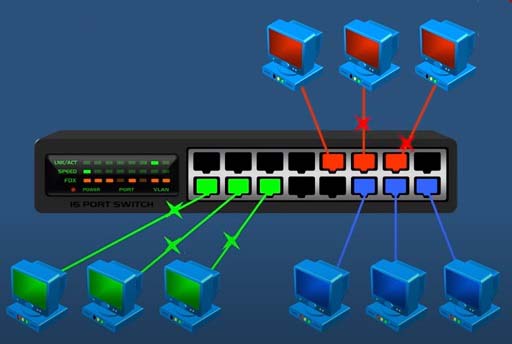 Now we can see that all these computers from these different departments are all connected to a switch. Local area network will combine in the one segment. So all the broadcast traffic is mixed in with other department and the departments are all seeing each other traffic. Now suppose a as a network administrator we want to separate the network broad cast traffic from these department from each other. So that the accounting department does not see any traffic from support, support does not see any traffic from the shipping and so on. Now one way to solve this is to physically move the computers that belongs to the same department and put them together such as putting them on the same floor and deploying the extra network hardware and cabling. But that could be a hassle and unnecessary work. But there is an easier way to accomplish this and that by creating VLAN. By using the VLAN on a VLAN capable switch we logically created several virtual networks to separate network broadcast traffic. In this case we are going to create three VLAN for three different departments. We are going to create a VLAN for the accounting department and then we will create another VLAN for the support department and then we will create VLAN for the shipping department. As the VLAN are implemented the traffic between the three departments are isolated so they would not see any traffic created from the other department. They will see only their own network traffic even though all the computers are from different departments sharing the same cable and switch. In this example the VLAN is created on the switch and this is done by designing the specific ports on switch and assigning those ports to a specific VLAN. So on the switch we will create a VLAN for the support department. So we will plug all the computer that belongs to the support department in those ports. Then we will designate another set of ports on the switch and create another VLAN for the accounting department. Finally we will designate another set of ports on the switch for another VLAN for the shipping department. 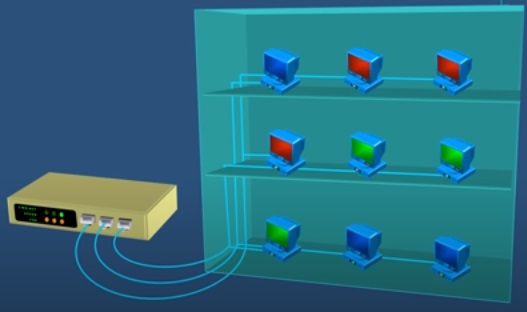