Near field Communication or NFC is a technology that requires two devices to be within its proximity of each other and to elaborate on this if we have ever worked somewhere we have an employee badge that had a door lock system installed so that we could use our badge to get in areas may be get in to a data center, get in to a building or a department that will be using Near Field Communication. We will hold the badge near the proximity reader and we will get access to enter the building etc. 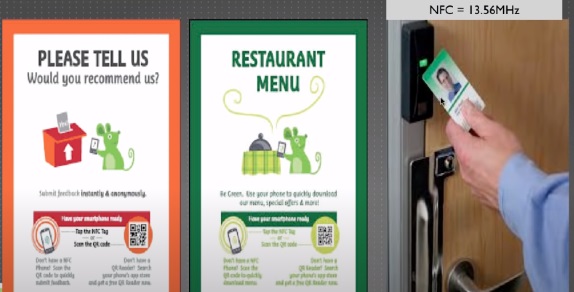 We might have used this NFC technology for pairing the Bluetooth speaker and smart watches. In fact because of this technology we are able to use the mobile payment services like Google pay, apple pay and Samsung pay. It is short distance wireless communication technology. It is standardized is ISO 18092. It is compatible with all the existing 13.56 MHz readers and tags that were already present. Near Field Communication has some additional modes they added a card mode inside the chip so basically it take the reader mode. The data rate of the NFC is up to 424 kilobits per second. Near Field Communication is usually used to communicate the small amount of the data. When two NFC enabled devices are very close to each other as we know that the NFC is short range and contactless technology enabling intentional communication whose range is up to 10 cm then they can communicate with each other using radio waves. Now out of the two communicating devices at least one device has to be an active device like smart phone, tablet or payment terminal. While the other device can be active or passive and the example of the passive device is the NFC tag. Now here the active device means the device which requires the external power supply while the passive device does not require any external power supply and it is powered by the electromagnetic field of an active device.

NXP only make the actual tag IC and mount it on to an antenna it is just a typically a few traces a few turns of metal traces and then they put on some kind of plastic inlay and that what becomes our NFC tag it is basically a EEPROM inside of that IC where we can read and write various data and potentially we can add security on top if we like in our NFC tag. 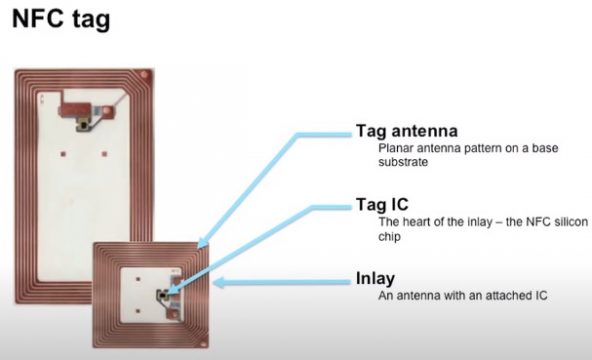 History of the NFC Near Field Communication:

Near Field Communication has been around since 2002 invented by Philips than NXP and Sony jointly invent NFC. In 2004 NFC forum was established by NXP, Sony and Nokia. In 2006 first commercial rolled out in to phones in Europe. The NFC interest kept growing and in 2008 NFC forum membership increases to over 150 member companies from all area of the NFC ecosystem. In 2011 NFC opened source Android phones incorporating the NFC. In 2012 NFC AFIs in window 8 and still it is going on.

NFC devices communicate with each other using the radio wave. These radio waves are generated using the antenna. So if we take the case of the smart phone then the antenna is fitted in the battery or sometimes it is fitted in the backside of the back cover. While in case of the NFC tag if we tear down the tag we will find the antenna pattern. So using this antennas these devices are able to communicate each other. Now these NFC supports the three modes of the communication which are: 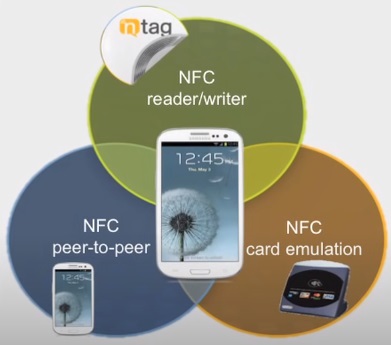 An example of this mode is when we are sharing the information using the two smartphones. Where we have actual data exchange data between two devices both devices are active devices and by generating the radio waves they can communicate with each other. It means that when one device transmits the data at that time the second device only listens and it does not generate its own radio wave. Similarly, when the second device transmits data at that time the first device only listens to it and it does not generate its own radio waves. So in this mode, both devices generate the radio wave alternatively at the carrier frequency of 13.56 MHz using this process we share information and files with each other.

In the example of this mode when we are accessing the data or information the smartphones from the NFC tag. This mode of operation is very similar to the RFID. So in this mode the active device like smartphone or tablet reads or writes the data on the NFC tag using the principle of the electromagnetic induction. Now to read the information from the NFC tag the active device generates the radio wave at the carrier frequency of 13.56 MHz. So these waves used to get coupled to the antenna of the passive tag and from the electromagnetic waves, NFC tag receives the power. The time varying electromagnetic field generates the EMF or voltage in this passive tag. So this generated voltage is rectified using the rectifier and it is power up the chip inside the NFC tag.

The small chip generally comprises of the clock EEP ROM rectifier circuit and the small controller. Once the chip is powered then the tag responds back to the active device by the technique which is known as load modulation. So in this technique the tag used the internal clock of the chip and it generates the auxiliary frequency of 848 MHz. Now depending on the store data inside this chip the load which is connected in parallel to the antenna is turned ON and OFF. In this way the data is send back to the active device. By the principle of the electromagnetic induction the passive tag receives the power and using the load modulation the data is sent back to the active device.

The example of this mode is when the smart phone is used for the mobile payments. In this mode both devices used to be an active device. Generally the one device used to be smart phone and the second device obviously used to be payment terminal. But in this mode the smart phone acts like a passive smart card. So they do not generate their own radio waves but only respond back to the requested data by the payment terminal. So in this way the mobile phone will be used as a passive device. So the operating principle of this mode is very similar to the reader or writer mode. So these are the three supported modes of the communication by the NFC. In the NFC some standards are defined to establish the communication between the two devices.  In these standards certain parameters are defined like:

So these standards are derived from the already existing standards which are used for the radio communication.

Applications of the NFC:

NFC can be used for sharing, for mobile payments, for pairing different devices, and for the information sharing using the smart posters and business cards. But apart from that it can be used for the home automation, for the health care, in the library system and even for the personal usage.

In home just by tapping the NFC tag using the smartphones we can change the brightness of the ambient light or it is possible to change the temperature of the AC. Even we close the doors automatically using the NFC. These are the certain applications in which NFC can be used in our home.

Similarly in the health care just by tapping the mobile to the patient tag we can get the required information and history of the patient very quickly. Moreover that it can be used for the personal usage. Like just by tapping the NFC tag we can change the setting of the mobile phone. There are many android apps available using which it is possible to write on the NFC tags.

The most popular among all is NFC tools. We can write on the NFC tags with the help of NFC tool app. In fact it also shows the number bytes that are required to write a particular code or URL in the NFC tag.

Comparison of the NFC with different technologies:

Now we will compare the NFC with the different technologies like Bluetooth, RFID and the QR code.

The Bluetooth is also wireless technology and using this we can share the information and the file with different devices. The Bluetooth shared the information at high speed as compared to NFC. But in case of the Bluetooth the time that is required for pairing the device is more compared to NFC. In fact in NFC two devices can be setup in less than 0.1 sec and that is why today in many devices NFC is used for pairing the different devices. Once the pairing of between the devices is established then for communication either Bluetooth or Wifi is used.

Now let us compare the NFC with RFID. The NFC is derived from the RFID standards. NFC and RFID system is based on the same working principle. The difference between the NFC and the RFID is on the basis of the frequencies. The RFID works on different frequencies which range is from the low frequency up to the ultra-high frequencies while the particular frequency band for the NFC is 13.56 MHz band. So that is the one difference between the NFC and the RFID. In case of the RFID the reader sends the request to the RFID tag and in response RFID tag replies back to the reader. So we can say that there is only one way communication is possible in case of the RFID. While in case of the NFC it is also possible to have peer to peer communication that means two devices can communicate with each other alternatively. So that is the difference between the NFC and the RFID.

The QR code technology can also be used in some application where these NFC tags are used. QR code is the black and white square code that can be seen as matrix barcode by scanning it with the camera and the processor of the mobile device can decode the data and we can get the information of the product or we can open some applications. It has three position indicators that help the scanner to locate and analyse code correctly from all angles. QR code could be applied for various things such as social sharing, print media tracking, feed backs and so on. So in a way this QR code can also be used in place of the NFC tags. While in case of Near Field Communication the information can be easily accessed just by tapping the mobile to the NFC tag. So we can say the access time which is required in case of NFC is less than the QR code. Moreover that this NFC is more secure than the QR code because in case of the QR code it can be replaced by putting another QR code on the top of it. While in case of the NFC if someone puts another NFC tag on top of it then neither of the tag can get accessed. So in a way the NFC is more secure than the QR code technology.