From the above we know that we have 16 states and it will count from 0 to 15 but it is when we have normal counter but this is special type of counter in which we cannot find the states like this. In case of ring counter the number of states is equal to the number of flip flops used. 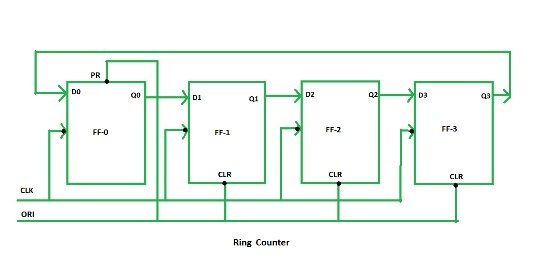 It will set the flip flop and when clear is equal to 0. The Q will equal to zero and it does not look for the value of the clock or D the input. They are going to override the output so we have used the pre-set and clear input in a certain manner that when the ORI signal will be low the pre-set and clear will be in action. In the circuit we can see that the ORI is connected to the clear of all flip flops except the first flip flop with which it is connected with its pre-set. We will not connect  the clear of the first flip flop.

When the ORI signal is given low and no clock signal is applied to it. It will make the output Q1 equal to zero because clear is low and in the same way Q2 and Q3 will also be 0. When the pre-set is low the output of the first flip flop will be high so Q0 will be 1 and it will follow a circular path to form a ring.

For the next falling edge D0 will be 1 because the output Q3 is connected with D0 and again the whole process will be restart.

As we see that 1 is rotating so therefore it is known as ring counter. The waveform of the ring counter is shown below. 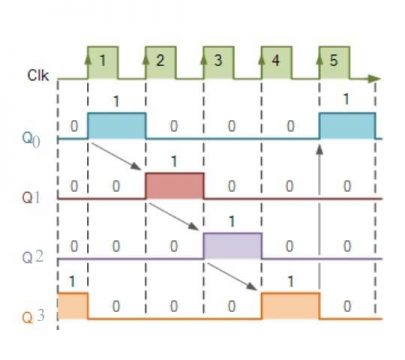 will be given to the input of the first flip D0. The difference between the ring counter and Johnson counter is that it does not require pre-set. 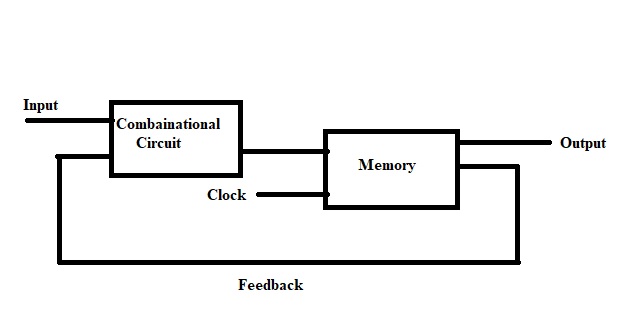 The output of the above sequential circuit will depend on the present input as well as its previous output so the output state of the combinational circuit will be stored in the memory and when we will provide the feedback to the combinational circuit it will be decided by the clock. We will get the output when we apply the clock pulse. The clock pulse will work like control input to the memory. The one output of the combinational circuit is given to the memory where it store. So there are different types of process in the sequential circuit and these processes are not randomly operated. In order to operate it in sequence we will need a timing signal so will apply a clock signal that will provide a sequence to the circuit. The clock signal will synchronize all the process. In flip flop clock signal decide whether the output will be change or not. We can decide the speed of the circuit with the help of clock signal by varying its clock frequency.

The ratio of time for which signal is high to the total time is called duty cycle. When the low state time and high state time which means that its duty cycle is 50%.

There are two types of triggered method which are:

Level triggering have further two types which are: