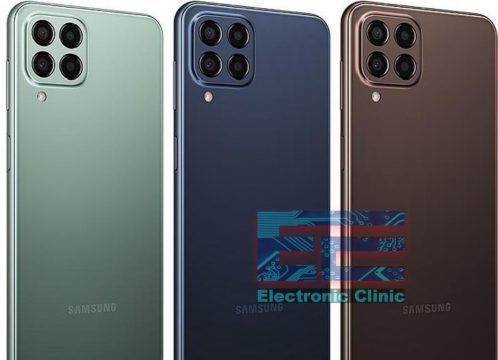 Samsung Galaxy M33 has the most amazing display on a mid-range smartphone. Its 6.6 inches IPS LCD, 120Hz, and 688 nits (peak) brightness display.  It is also Full HD+ with a PPI density of 400. The display is punchier and fast with 120Hz support, and more colorful. The gaming experience is also going to be on another level because it’s a 120Hz display and also the content watching will be good. Thanks to DCIP3 technology. Samsung Galaxy M33 is using the IPS LCD panel. This display is capable of delivering faster performance with no touch lag issuers. The display is also protected by Gorilla Glass 5 which is not strong as the Gorilla Glass Victus but giving this on a midrange is great. Samsung is known for its good software optimization when it comes to displaying.

Samsung is known for its amazing designs. Samsung Galaxy M33 with the new design, it looks more futuristic and strong. The rear is made of Plastic. The frame is made of plastic, which makes it lighter. There is IP53 water and dust resistance. In this Samsung Galaxy M33, we got to see the better design and the better back. Which is good to see on the Mid-range phone. It’s protected by a plastic frame that’s why it makes it lighter by 188 grams. Talking about the design, the Camera bump is quite a  good place. The camera bump looks familiar with the Realme 8 and Realme 8 Pro. Talking about the fingerprint scanner it’s located on the home button and it’s fast with new features. I like the in-home button fingerprint scanner because it is faster and more efficient than the in-display fingerprint scanner.

Samsung Galaxy M33 is launching in 2 variants of ram and 1 variant of storage. 6GB and 8GB RAM with the new Samsung Exynos 1280 is a good combination. The ram is LPDDR4x and clocked on 2133MHz. there is 1 storage option which is 128 which is good for a mid-range smartphone. The Samsung Galaxy M33 has the fastest UFS 2.1 storage support. There is an SD card support of 1TB. It is good to see that this Samsung Galaxy M33 can support SD cards up to 1024GB.

Now let’s talk about the benchmarks. The Qualcomm Snapdragon 8 Gen 1 has good CPU scores in the Geekbach 5. The single-core score is 732. This is quite impressive when it comes to single-core performance and also the multi-core which is 1894. Which is faster than the newly launched Qualcomm Snapdragon 695. You can check that out.

The Samsung Galaxy M33 comes with Android 12 support. Which can be customized more than the Android 10. In the new One UI 4.1, there are tons of new features added to the Samsung Galaxy M33. This new custom ROM is greatly optimized with new bugs fixes and with a new layout that is fun to play with.

Samsung Galaxy M33 comes with a Quad Camera setup. The main camera is 50 Megapixels F/1.8. There is an ultra-wide-angle lens of 5MP. This is a pretty amazing Camera setup which means the photos will contain more details. There is 4K 30 FPS and 1080P 60 FPS video support. The videos will contain more details and will be sharper thanks to its chipset. There is no optical image stabilization. When it comes to dynamic range and sharpness this camera can handle that in harsh light conditions while maintaining good noise control.

The Samsung Galaxy M33 has an 8-megapixel Selfie Camera. Their recording is kept on 2K at 30 FPS. But considering this Selfie Camera is 8 megapixels. This means it will contain fewer details. It’s also F/2.2. Which will help to collect more light at night photography. The sensor is bright and wide which makes the selfie camera a good upgrade.

The Samsung Galaxy M33 comes with Wi-Fi 5 with the Bluetooth version of 5.1. Which contains more speed and a better coverage area. Thanks for the Wi-Fi 5. It gives you a better upload and download speed. Samsung Galaxy M33 comes with the USB type C 2, which makes it faster and more efficient. There is NFC support in this smartphone which is very helpful in many situations.

So, this was my review of the Samsung Galaxy M33. This phone has an amazing chipset with an amazing camera. So, I highly recommend buying this phone if you are looking for a good value Mid-range gaming phone.

If you guys learned something new then make sure to check out my other articles as well as my YouTube channel.