There are following three types of a Multi-vibrator. 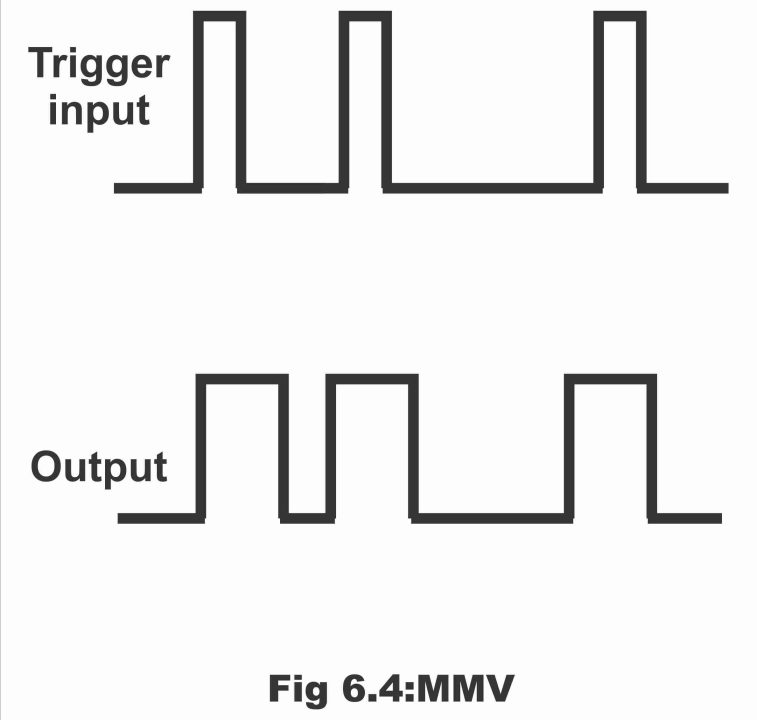 In figure 6.6, operation of a bistable Multi-vibrator has been illustrated. 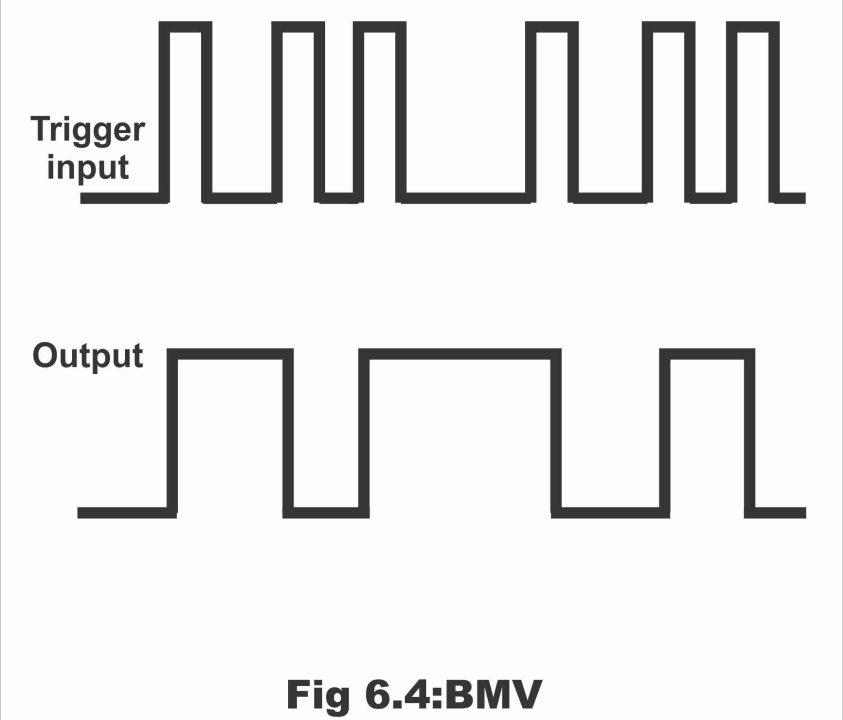 555 Timer is a digital monolithic integrated circuit that can be used as a clock generator. In other words, it is a digital timing circuit, which can be connected as an astable or monostable circuit. A 555 timer is a versatile type and a massively used device, which operates on any one of these two states i.e. either an astable or monostable state. It can provide a time delay ranging from few micro seconds to several hours. As this device (i.e. 555 timer) can be used both as an astable as well as monostable circuit, therefore it is called a timer. A 555 device is a low-priced device, which is available in the form of an IC. It operates within a pretty vast range of potential difference (normally between +4.5V to +15V) and there is no effect on output either of these changing voltages. That’s why it is also called a linear device. Due to being compatible, a 555 timer can directly be connected with TTL or CMOS digital circuits. However, in order to connect with other digital circuits, interfacing is always required.

Various organizations produce different type of 555 timers, amongst which, the basic number is 555.  For example, SE555, CA555, SN555 and MC14 555 etc. Two 555 timers are generally fabricated within one chip and it is allotted 556 number. Now-a -days such types of 555 are also commonly available, on one chip of which four 555 timers exist. These devices are available in the form of 8-pin round IC, or in the shape of a DIP containing 8 pins or 14-pin shaped DIP.

In figure 6.7, pin diagram of 555 timer consisting on an 8-pin DIP (dual inline package) has been demonstrated. The pins detail of this IC is as under:

When a negative trigger pulse equivalent to 1/3 of a total VCC voltage (i.e. VCC/3) amplitude, is provided on this terminal, output state of the circuit switches from low to high.

Irrespective of previous output state, providing a trigger pulse on the terminal, resets the device (i.e. output turns out to be low)

Two third (2/3) positive VCC voltage of an overall VCC voltage, exist on this terminal. Thus, it becomes a part of a comparator circuit. Normally, a capacitor is mounted between this terminal and ground.

Supply voltage are applied on the terminal in order to drive or operate a 555 timer. In figure 6.8, a simple diagram of 555 timer has been illustrated, by means of which its intrinsic circuit has been explained. According to this figure, this timer consists of two comparators, an RS flip-flop, output stage (output buffer) and a discharge transistor Q1. It also contains three resistors mounted on 5KΩ series, one end of which is connected with +VCC (i.e. with pin number 8) and other point or end connected with ground (GND) or pin number 1. Remember that owing to three resistors being fitted on a 5KΩ series, this IC timer chip has been named as 555. 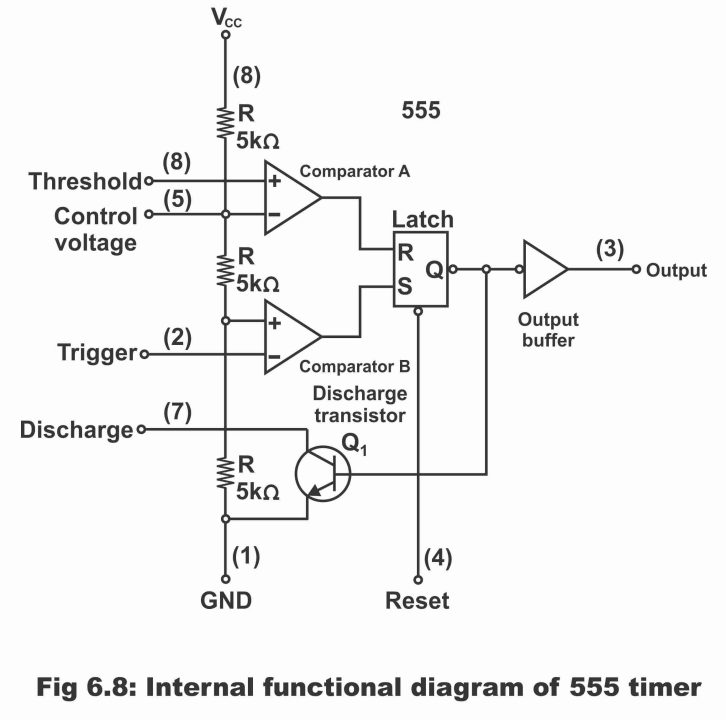 When value of normal high trigger input falls below 1/3VCC momentarily, then comparator B ‘s output rises from low to high. As a result, RS latch or RS flip-flop becomes set. As a result of a set flip-flop, output (pin number 3) gets high and simultaneously, discharge transistor Q1 turns off. This output tends to remain high so long as the normal threshold input value does not exceed to 2/3 VCC. As soon as, threshold input value exceeds 2/3 VCC, comparator A output turns from low to high. As a result of a high comparator value, RS flip-flop resets (as comparator A ‘s output is directly associated with R input of the RS flip-flop, as has been shown in the figure). As soon as flip-flop resets, output turns low once again and discharge transistor Q1 turns on. Flip-flop can also be rest without a threshold circuit via application of an extrinsic reset input. Remember that trigger and threshold inputs (pin 2 and pin 6) are controlled through extrinsic components. And by means of this control through these threshold and trigger inputs components, this timer can be used for an astable or monostable action.

Next Topic: 555 Timer as an Astable and Monostable Multi-Vibrator with circuit diagram