A capacitor is a device that stores electrical energy in an electric field. It is a passive electronic component with two terminals.

A capacitor (historically known as a “condenser”) is a device that stores energy in an electric field, by accumulating an internal imbalance of electric charge. It is made from two conductors separated by a dielectric (insulator). Using the same analogy of water flowing through a pipe, a capacitor can be thought of as a tank, in which the charge is often thought of as a volume of water within the tank. The tank can “charge” and “discharge” in the same manner as a capacitor does to an electric charge. A mechanical analogy is that of a spring. The spring holds a charge when it’s pulled back.

Capacitance of a Capacitor

Where C is capacitance Q is charge, and V is voltage.

By rearranging the terms in above equations, you can obtain two other formulas.

The Unit of Capacitance: The farad (F) is the basic unit of capacitance. Recall that the coulomb (C) is the unit of electrical charge.

One farad is the amount of capacitance when one coulomb (C) of charge is stored with one volt across the plates.

How a Capacitor Works

Electric current is the flow of electrical charge, which is what electrical components harness to illuminate, or spin, or do whatever they are doing. When current flows into a capacitor, the charges get “stuck” on the plates because they cannot get pass the insulating dielectric. Electrons — negatively charged particles — are sucked into one of the plates, and it becomes overall charged. The mass of negative charges on one plate pushes away like charges on the other plate, making it positively charged.

The positive and negative charges on each of those plates attract one another, because that is what opposite charges do. But, with the dielectric sitting between them, the maximum amount as they need to return together, the charges will forever be stuck on the plate (until they have elsewhere to go). The stationary charges on these plates create an electrical field, which influences potential energy and voltage. When charges group together on a capacitor like this, the cap is storing electric energy even as A battery might store energy. 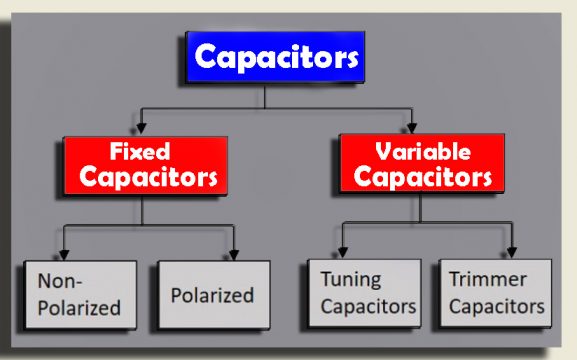 You might be thinking why is it called a Paper Capacitor? You know? Paper capacitor is also known as a fixed capacitor, and it is called a Paper Capacitor, because in this type of the Capacitor paper is used as a dielectric medium, that stores energy in the form of the electrical field. These capacitors are used at power line frequency with a capacitance value of 1nF to 1uF. It stores a fixed amount of electric charge. 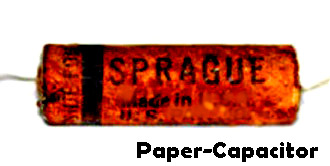 A paper capacitor or Fixed Capacitor is made up of two metallic plates with a dielectric material paper between them. It has positive and negative plates. When a small amount of electric charge is applied over the plates, the positive charge is attracted to one plate and a negative charge is attracted to another plate. This electrical energy is stored in the form of the electrical field. This stored electrical energy is used by the discharging of a capacitor. These are available in the range of 500pF to 50nF. These offer high leakage currents. 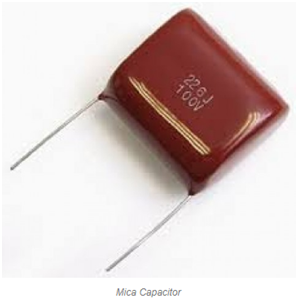 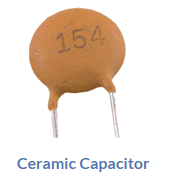 They exhibit large non-linear changes in capacitance against temperature and as a result are used as decoupling or bypass capacitors as they’re also non-polarized devices. Ceramic capacitors have values starting from a couple of picofarads to at least one or two microfarads, (μF) but their voltage ratings are generally quite low.

Ceramic sorts of capacitors generally have a 3-digit code printed onto their body to spot their capacitance value in pico-farads. Generally, the primary two digits indicate the capacitors value and therefore the third digit indicates the amount of zero’s to be added. for instance, a ceramic disc capacitor with the markings 103 would indicate 10 and three zeros’ in pico-farads which is like 10,000 pF or 10nF. 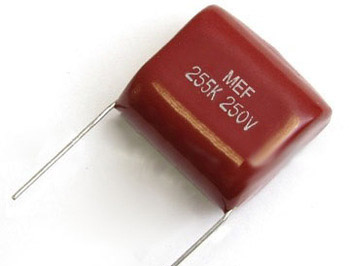 Electrolytic Capacitors are almost used in all electronic circuits, they are most frequently used in power supplies as the decoupling capacitors, these are the most frequently used capacitors and have a good tolerance capacity. Just like resistors, capacitors are available in different sizes. The electrolytic capacitors are polarized. These capacitors have the positive and ground legs. The ground leg is provided with a long strip. Another identification can be, the positive leg is slightly longer than the ground leg. But in many situations, when both the legs are of the same size, then the long strip on one side of the capacitor is used as the identification, the leg on the strip side will be the ground leg. Electrolytic capacitors can be found with working voltages up to about 500V, although the very best capacitance values aren’t available at high voltage and better temperature units are available, but uncommon. There are two sorts of electrolytic, tantalum and aluminum in common.

Tantalums capacitors have ordinarily better exhibition, higher value, and are ready just during a more limited extend of parameters. The dielectric properties of tantalum oxide is far superior to those of alumina giving a neater leakage current and better capacitance strength which makes them suitable for obstructing, decoupling, filtering applications.

The thickness of the alumina film and heightened breakdown voltage gives the capacitors exceptionally elevated capacitance values for his or her size. during a capacitor the foil plates are anodized by a dc current thus setting of the extremity of plat material and confirming polarity of its side.

A Variable Capacitor is that type of a capacitor whose capacitance can be changed mechanically. These types of the capacitors are provided with knobs or screw. These type of capacitors are used in circuits where we need to adjust the frequency i.e. frequency of resonance in LC circuits, as an example, to regulate the radio for impedance matching in antenna tuner devices.

There are many uses of these variable Capacitors such as for tuning in LC circuits of radio receivers, for impedance matching in antennas etc. The main types of variable capacitors are Tuning capacitors and Trimmer capacitors. 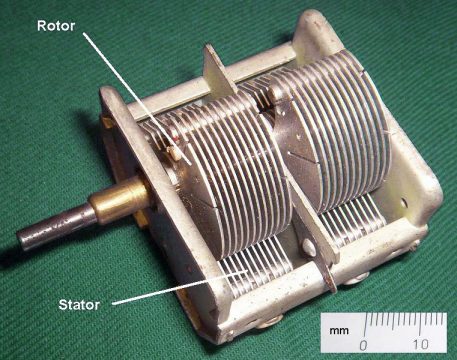 There are three leads of a trimmer capacitor, one connected to the stationary plate, one to rotary and therefore the other one is common. The movable disc may be a semi-circular shaped one. A trimmer capacitor would appear as if those within the following figure. 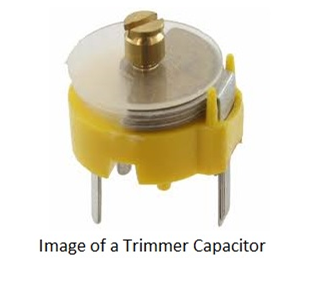 There are two parallel conducting plates present with a dielectric within the middle. The constructional of a trimmer capacitor is as shown below. 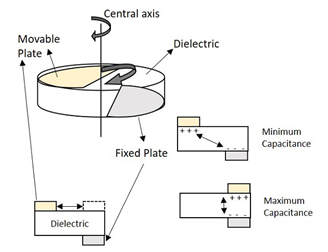 Construction of a Capacitor

The device consists of two parallel conducting metal plates which are separated by an insulator called dielectric. The conducting material is made up of aluminum or other metal and the dielectric can be made up of ceramic, glass, paper or plastic. The metal plates of a capacitor can be either square, circular or rectangular, or they can be of any other shape and size. A two lead is brought out from each plate to enable the device to be connected to a circuit. 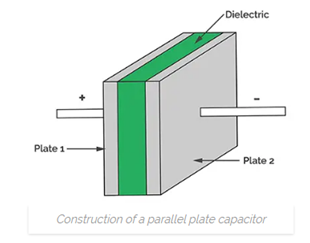 When a voltage is applied to the two leads through a battery source, the charge deposits on the plates of the capacitor. As long as this voltage is equal to battery voltage (E) the circuit is in balance condition. When we break the connection of the battery the charges cannot flow away and the voltage remains stable between the two plates. This combination of two plates, which are separated by an insulator and which are able to store some amount of electricity is called a capacitor or condenser.

Combined with resistors, capacitors are often used as the main element of frequency-selective filters. The available filter designs and topologies are numerous and can be tailored for frequency and performance by selecting the proper component values and quality. Some of the types of filter designs include:

You might have seen capacitors soldered near the supply pins of the chips, or at the input and output pins of the voltage regulators, these are Decoupling capacitors. Capacitors play a critical role in the stable operation of digital electronics by protecting sensitive microchips from noise on the power signal, which can cause anomalous behaviors. Capacitors used in this application are called decoupling capacitors and should be placed as close as possible to each microchip to be most effective, as all circuit traces act as antennas and will pick up noise from the surrounding environment. Decoupling and by-pass capacitors are also used in any area of a circuit to reduce the overall impact of electrical noise.

In circuits where a high-inductance load is driven, such as a motor or transformer, large transient power spikes can occur as the energy stored in the inductive load is suddenly discharged, damaging components and contacts. Applying a capacitor can limit, or snub, the voltage spike across the circuit, making the operation safer and the circuit more reliable. In lower-power circuits, using a snubbing technique prevents spikes from creating undesirable radio frequency interference that generates anomalous behavior in circuits and causes difficulty in gaining product certification and approval.

At their most basic, capacitors are effectively tiny batteries that offer unique energy storage capabilities beyond those of chemical-reaction batteries. When lots of power is required in a short period of time, large capacitors and banks of capacitors are a superior option for many applications. Capacitor banks are used to store energy for applications such as pulsed lasers, radars, particle accelerators, and railguns. A common application of the pulsed-power capacitor is in the flash on a disposable camera, which is charged then rapidly discharged through the flash, providing a large pulse of current.

While resistors, capacitors, and inductors make filters, certain combinations can also result in resonance amplifying the input signal. These circuits are used to amplify signals at the resonant frequency, create high voltage from low voltage inputs, as oscillators and as tuned filters. In resonant circuits, care must be taken to select components that can survive the voltages that the components see across them or they will quickly fail.