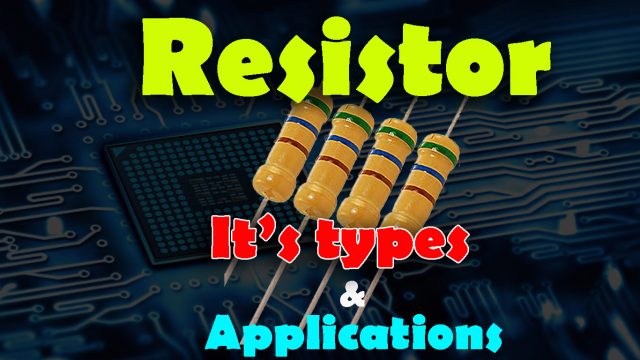 When I was a student of engineering, the first electronic component, which I was introduced to in the Electronics Lab was a resistor. In the Lab, I learned some basic things like, how to find the resistance of a resistor with and without using a digital multimeter, and this was the time when I learned about the resistor color coding. Slowly and gradually I learned about how to use resistors in series and parallel and how to use the ohm’s law in practical circuits.

But before I write an article on how to use resistors in series and parallel and how to find the value of a resistor using the color codes, there are things that you need to know about. A resistor is not that simple as we think, we have so many different types of resistors which are used in different situations.

In this article, I will only explain the extreme basics like for example.

What is a Resistor?

No doubt, resistors are used in virtually all electronic circuits.

A resistor is a passive electronic component and is used to create resistance in the flow of electric current or in simple words it limits the flow of electrons through a circuit. I used the term passive which means that resistors only consume power and they cannot generate the Power.

What does a resistor do?

What is a resistor used for?

Why do we use a resistor?

These are of the type of questions which are most frequently asked by the beginners.

Resistors are most commonly used to limit the current, divide the voltage, and used as the Pull-Up or Pull-Down resistors with the microcontroller I/O pins.

The resistance of a resistor is measured in Ohm’s which I am sure you already know about. A Greek symbol Omega “ Ω “ is used to represents the resistance. So, 1Ω “1 Ohm” can be defined as the resistance between two points where 1V of the applied voltage will push 1 ampere “1A” of current.

The smaller and larger resistor values are matched with the prefixes like Kilo ohm “KΩ, Mega ohm “MΩ”, or Giga ohm, etc.

A resistor symbol is also known as the schematic symbol. All resistors have two terminals except the variable resistors or some other special type of resistors which can have multiple legs. R1 is the American style 10KΩ and R2 is an international-style 1KΩ.

For the easy understanding, every resistor in a circuit should have a unique name like R1, R2, R3, and so on. The same thing applies to all the electronic components. As in the programming we use unique variable names to easily differentiate one variable from the other. So, the same terminology is used in circuit designing as well.

As I said earlier resistors are available in different sizes, shapes, and materials. Different types of resistors can be clearly seen in the chart/tree given below. We will discuss the advantages and disadvantages of each type of resistor. 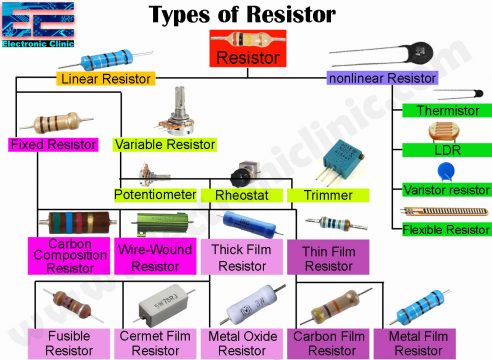 There are mainly two types of resistors.

Most commonly used fixed resistors are 1kΩ, 100Ω, 10kΩ, and 330Ω. These are of the type of resistors which I believe every beginner should have.

There are four types of Fixed Resistors. 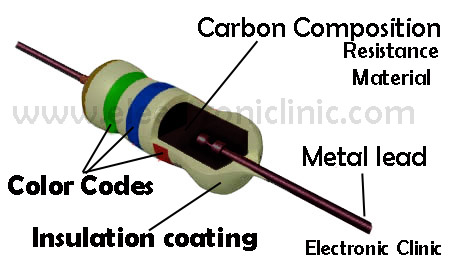 The carbon composition resistors were the most frequently used resistors in the 1960s and earlier. But, due to its high cost and low stability, these resistors are nowadays rarely used.

The wire-wound resistors are made up by winding the metal wire around the insulating core or rod. The metal wire around the core acts as the resistive element which restricts the flow of electric current. This wire is made up of Tungsten, Manganin, Nichrome or nickel or nickel-chromium alloy. While the insulating core is made up of Bakelite, Porcelain, press bond paper, or ceramic clay material.

The wire-wound resistors in which the manganin is used are very costly and they are used with sensitive test equipment, for example, Wheatstone bridge, etc. These types of resistors can be safely operated in temperatures up to 350C. There are available from 2 watts up to 100-watt power rating or even more.

The disadvantage of wire wound resistors:

The wire-wound resistors are very expensive and they cannot be used in high-frequency equipment.

The wire-wound resistors are used where we need

For example, it is used as the shunt resistor with ampere meters, the wire wound resistors are commonly used in high power rating devices and equipment, these are used in industries, and control equipment. The wire-wound resistors are the oldest type of resistors and have excellent properties. During their use, these resistors can become very hot, and for this reason, these are housed in a fnned metal case for heat dissipation.

The Metal Oxide Resistors are fixed form, axial resistors. They are made of the ceramic rod that is coated with a thin film of metal oxides, such as tin oxide. These resistors are available in a wide range of resistance with high-temperature stability. These resistors can be used at high voltage and the level of operating noise is very low. 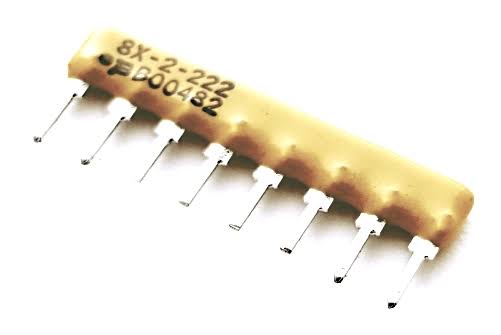 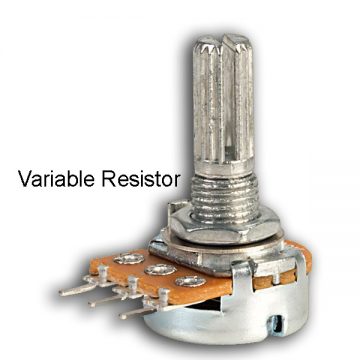 Normally, a Potentiometer is a three-legged electronic component which is used for controlling the voltage in a circuit. The resistance between the rightmost and leftmost legs is constant while the middle leg is connected with the moving part(wiper) which is variable. By changing the resistance which is done by rotating the knob of the Potentiometer we can get different voltages.

Inside the Potentiometer, there is a Carbon Track, Rotating wiper, a shaft, Resistive material, and terminals.

A Rheostat is an electrical instrument used to control the current by varying the resistance. This is used for the current limiting purposes which are done by hand or manual operation. A Rheostat is usually two or three-terminal devices.

A Rheostat has a wire wound, adjustable tap, housing, and terminals.

Trimmer potentiometers are sometimes referred to as trim pots or trimmer resistors are a type of adjustable potentiometer (variable resistor). They are used to calibrate and fine-tune circuits. The trimmers are usually constructed from cermet or have Carbon Composition.

I personally love this category of resistors. I have been using Non-Linear Resistors for such a long time. Nonlinear resistors are those types of resistors, in which the flow of current changes with change in temperature or the applied voltage.

There are three types of Non-Linear Resistors.

Thermister is also a resistor in which the current flowing through a resistor changes with change in the temperature.

Flexible Resistor which is also known as the flex sensor or bend sensor is a sensor that measures the amount of bending or deflection. The Flex sensors are used for the precise angle measurement. I have a very detailed tutorial on this sensor which you can find the related projects section given below.

All the types of resistors so for discussed are used for the following purposes.

Want to Know more about Resistors and Suppliers?

It is quite clear from the name Zero-ohm Resistors, these are of the type resistors which has almost no resistance at all. In reality this resistance is not 100% zero, but its near to 0 ohms. The Zero-ohm resistors offer very small resistance. These resistors are available in 2/4W and 1/8W power ratings.

Why use Zero-ohm Resistors?

The first question which pops up in everyone’s mind is, why we need a resistor which has a resistance equal to zero? Rather than using a zero-ohm resistor why not use a normal jumper wire.

The zero-ohm resistors are used in PCB manufacturing companies as you know today the components in printed circuit boards are inserted by automatic insertion machines to speed up the manufacturing process rather than manually by humans. There are situations when two points need to be short on the printed circuit board, the automatic machines in use can only handle components such as resistors but not jumper wires. For jumper wires a separate machine may be needed or these wires should be manually inserted by humans. So, instead zero-ohm resistors are used. 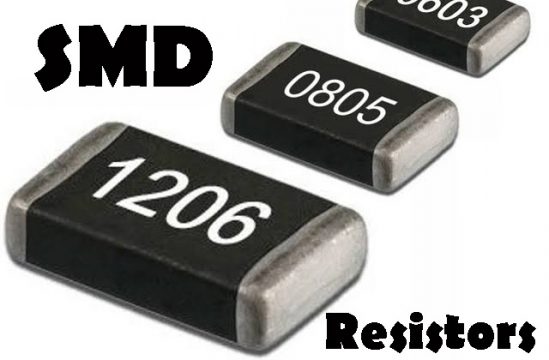 SMD stands for Surface Mounted Device. An SMD is an electronic component that is made to use with SMT, or Surface Mount Technology. The SMD resistors are easy to install by the Automatic machines than the regular resistors. The SMD resistors can be easily installed and removed. The SMD technology helped the PCB manufacturing companies to speedup the manufacturing process. This is just because of the SMD technology the sizes of the electronic devices reduced and also the costs are reduced.

Is a resistor a Switch? This is one of the most frequently asked questions. People are searching about this. Well, Resistor is not a switch, it is an electronic component that resists the flow of current or controls the flow of current. But a resistor can be used with a button as the Pullup resistor or as the pulldown resistor, which gives the microcontroller a signal. Which can be a 5v signal or a 0”Gnd”.

High Voltage Resistors are one of the most commonly used resistors in office equipment and home appliances,

NTC stands for “Negative Temperature Coefficient”. The NTC thermistors or resistors are the nonlinear resistors with a negative temperature coefficient, which means that the resistance decreases with increasing temperature. The NTC resistors or Sensors are typically used in a range from -55C to 200C.

State of the art resistors:

State of the Art, Inc deals in