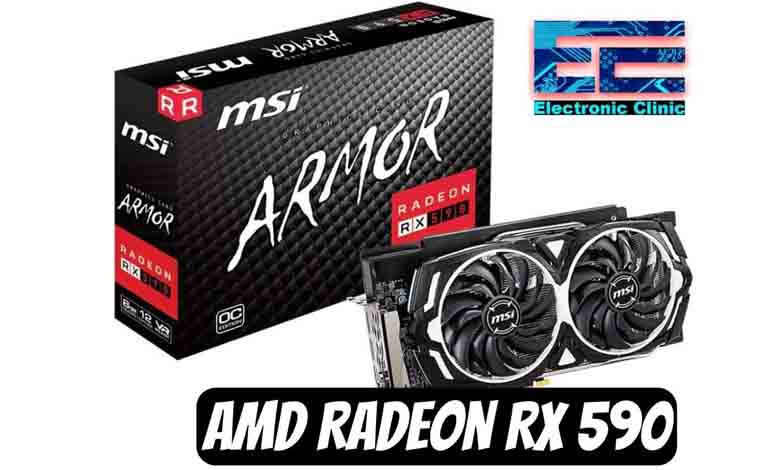 The main reason why this gpu is able to beat the RX 580 is its higher clock speeds. Thanks to a higher base clock and higher boost clock this gpu manage to beat the RX 580. The base frequency of this GPU is 1469 MHz which is faster than most new GPUs. The Boost Clock is also faster than other GPUs at this point which is 1545 MHz the base frequency is going to help in mostly GPU-bound games like Call of Duty Warzone.

AMD Radeon RX 590 has 2304 Stream Processors. The Cuda cores are more than AMD Radeon RX 460 and AMD Radeon RX 560. There are also 32 ROPs that help in rotating, resizing, and much more. There are 144 Texture Units. The Texture units help a lot when it comes to gaming textures like cars, bushes, trees, etc. with new continuous updates in drivers this GPU gets faster and more efficient in updates from AMD. There are also 36 Compute units that help with the CPU performance to get the most out of this GPU.

This gpu is slightly more power efficient than the RX 580. This GPU’s maximum power consumption is 150W compared to its predecessor’s 200W. There are also many variants of this GPU that can be further overclocked thus eating more power. Which allows the users to get more out of the GPU. The power limit of this GPU is around 180W which is a lot to get faster performance when it’s overclocked. You can get 10-15% more FPS when it’s overclocked but I would not recommend that, if you don’t know about overclocking.

The max monitor support increases with the increase of new technologies and with new updates from monitors, TVs, etc. the GPU’s updates as well. This GPU can support maximum display at 8K with up to 1 monitor. There are vainest with different display outputs. But you will find more than 4 display connectors. There are some variants with thunderbolt displays at well. But there will be 2 display ports 1.4 and 2 HDMI 2.0b connectors.

The pixel fill rate of This GPU has scored 49.44 Gigapixels/which is amazingly fast compared to its predecessors. The texture fill rate also scores 222.48 Gigatexels/s. That’s why it supports 4K at high frame rates thanks to ROP’s. The single computing also scores 7.119 TFLOPS, and double precision computes power scores 444.96 GFLOPS this is amazingly fast. In terms of performance, this GPU is faster than GTX 1650.

Well, one of the most important and key factors about this GPU is its power consumption. This GPU is not that power-hungry. This GPU needs 1 x 8-pin connectors. There are also 2 display ports, 1 HDMI, and 1 Type C port, which is really great for multiple monitors. There is also Audio input from HDMI which also helps with these new monitors.

These days the size of the GPU is also important because there are a lot of cases that don’t fit some long GPUs. This GPU is 9.5 inches, which can fit in most PC cases. Plus the GPU is also Dual-slot which helps in heat overflow.

There are a lot of new features in this GPU, and they are updated over time. The most amazing new features of this GPU are Direct Compute 12, AMD PowerTune, AMD ZeroCore Power, ATI/AMD PowerPlay, HD3D Technology, HDCP, High Dynamic Range (HDR) Support, etc. This AMD Radeon RX 590 has Open CL support 2.0 which is a lot efficient than the last gen Open CL. This will help in boost in performance. AMD Radeon RX 590 also has Open GL 4.6 support which is also faster than the Open GL 4.5. AMD Radeon RX 590 also has DirectX 12 ultimate support. The Vulkan support is also 1.1 which makes the drivers experience more up-to-date. The Shader model makes the texture experience more accurate and more efficient and fast. AMD Radeon RX 590 has the Shader model 6.4.

The gaming experience of this GPU is on another level. AMD Radeon RX 590 has the fastest memories, fast clock speeds, faster memory clock speeds, more Cuda cores, the newest architecture, and higher bandwidth. Which makes the gaming experience more powerful. The more the Cuda cores the faster the performance of a GPU will be. Running GTA 5 on this GPU will give you around 100+ FPS. And in almost every game this GPU shows the best performance.

So, this was my full review of the AMD Radeon RX 590 if you want to check out more articles like this then check the reviews in the menu. Also, do check out my YouTube channel. Thanks.