Attenuator is a simple resistive network which reduces the amplitude of the input signal by finite amount at the output and the circuit is called as attenuator circuit. 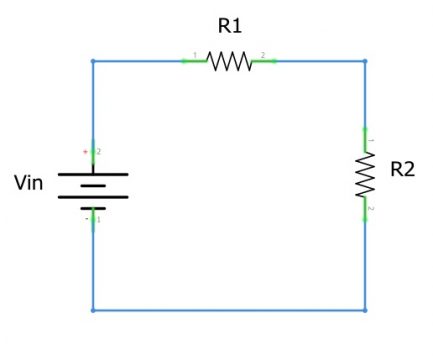 By applying KVL law we get:

This equation is generally but practical there exist capacitance across R2 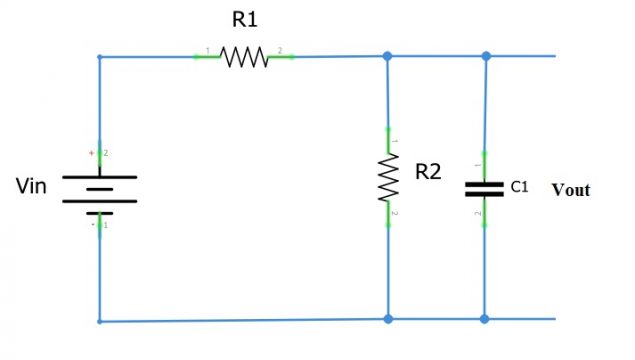 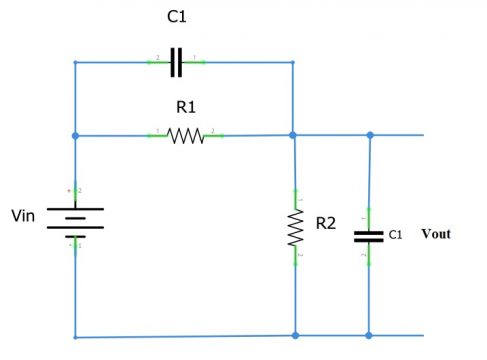 This is the condition for the compensated attenuator 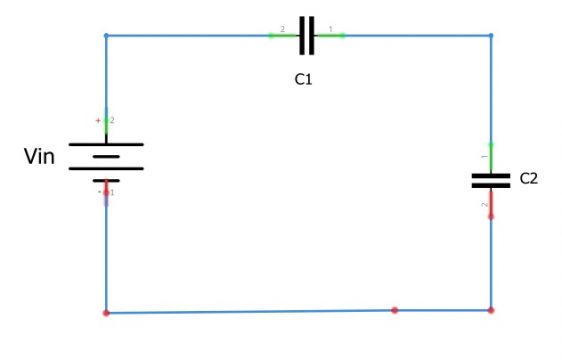 The attenuation will be:

At t = ∞ the capacitor will act as open circuit the circuit will become:

We will get the output across R2

Attenuator is passive elements those are used to control the amount of microwave power transferred from one point to another on a microwave transmission line. So, you have two options, whatever power is coming if you want to attenuate either you reflect the energy or you consume the energy that is absorb the energy in some dissipative elements. Generally, this absorption is done. Now, there are attenuators which are available in microwave region they are either fixed or variable, fixed means always that device will be able to give you a fixed attenuation and variable you can change as many dB of attenuation you want to change.  Suppose you have a signal source which gives you a 20 volt thing, but you want to see that signal that time you will need to connect it to the oscilloscope and oscilloscopes are they cannot handle 20 volt signal. So, you need to have an attenuator in between so that, your signal will come to 5 volt or something of every oscilloscope has a specification.

It consists of a dielectric strip coated with resistive film. It is placed at the centre of the waveguide parallel to the Emax. The strip is parallel to the electric field intensity then it can absorb minimum amount of the incoming signal. If it perpendicular it absorb the required attenuation. When the electric field passes through the film it can induce current. Induced current on the resistive film due to the incident wave result in power dissipation in the form of heat which is nothing but the attenuation of the microwave energy. 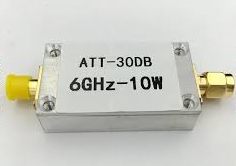 There are two types of variable type wave guide attenuators:

Attenuator basically takes an incoming signal and weakens it reduces the power of that signal by a certain factor given a certain purely resistive impedance at the input and the output impedance that the input and the output are usually the same. In any case these resistors must be capable of dissipating sufficient power so that they won’t burn out when the relatively high powered input is applied usually we go from left to right in schematic diagrams. So we will assume that the input is on the left and the output is on the right in both cases but the ideal attenuator pad should be reversible that is you should be able to interchange the input in the output and get the same result because it is symmetrical circuit. These resistors must not have any reactance so they have to be generally carbon composition high wattage resistors a good example of the application of an unbalanced attenuator pad would be when you want to drive a high-powered linear amplifier for Ham-radio purposes but this amplifier only requires a few watts of input say five or ten or maybe even fewer than five watts but your transmitter has a relatively high output say a hundred watts. You reduce those 100 watts at 50 ohms non-reactive purely resistive impedance you want to reduce that hundred watts or whatever to only a few watts or possibly even less than a lot many linear amplifiers. However are designed so that they will accept about a hundred watts and in fact even require about a hundred watts of input so you don’t need an attenuator pad for such a linear amplifier but they’re almost always fed with coaxial cable which is a single-ended or unbalanced transmission line and almost always has a characteristic impedance in ham radio use of 50 or sometimes technically fifty two ohms. Now in this case we have a balanced attenuator pad which has a much wider variety of potential applications you might want to use it at the input of a receiver of a sensitive receiver to be sense that receiver for some reason you might want to use it between stages of a power amplifier circuit that has a balanced input and output you might use it at the output of a trance match to reduce the power for some reason or another you could always convert a balanced attenuator to an unbalanced attenuator just by grounding one end but you have to be sure to make that both terminals here are connected to ground. In other words you have a short out fat resistor and then ground it and then you get a circuit like this you have to choose the values of the resistors appropriately so that you get the desired input and output impedances and that the impedances contain no reactance. So the resistors can’t have any reactance attenuators do not perform properly when the input or output or any of the resistors contain reactance with resistors it would be for example you would not want to use wire wound resistors and finding a high-powered carbon composition resistor can be a difficult task.

Sometimes you even want to use a low-power attenuator in a receiver circuit for example if you have a very high-powered station in the vicinity and you need to reduce the power that it’s introducing into your receiver. so it doesn’t defines the receiver all across its entire intended spectrum of reception but then of course then of course you will attenuate the desired signals as well but it’s better than overloading your receiver those are just a few applications  on the term attenuator.

Attenuation in the optical fiber:

When light travels along the fiber there is a loss of optical power which is called attenuation. Attenuation represents the reduction in the amplitude of the signal. The attenuation of the optical fiber measures the amount of light lost between the input and output end of the fiber. In optical fiber the attenuation is mainly caused by the:

The attenuation of the fiber depends upon the material from which it is fabricated the manufacturing process and the refractive index profile. Attenuation is measured in dB/Km.

Some sources of the attenuation are:

The rate at which the light is absorbed dependent on the wavelength of the light and the characteristics of particular glass.

Signal attenuation it is basically redactions of signal strength during signal transmission to demonstrate it with a waveform it will look like this the father the waveform goes the weaker it becomes because the amplitude of the wave form is becoming smaller and smaller edits go further and further and the a generation is represented and disabled.

Signal attenuation occurs to do four causes which are:

These four are the common causes of attenuation long cable for both wired and wireless transmissions. The signals is weakened if it is transmitted to a long distance the signal amplitude gets smaller and smaller resulting in attenuation warrior sized. Wire size has a huge effect of causing the attenuation to then wire can have more attenuation than a thick wire since it can be easily disturbed by external interferences thick wire can provide more secure signal transmission cross-talk attenuation can be caused by crosstalk from the adjacent wire crosstalk can be referred to an electromagnetic interference from another transmission wire. This occurs when two into the twisted pairs are running in parallel.

Transmission wires are causing electromagnetic interference to each other signal generation can also occur due to defective connectors and conductors.