The situation of input voltage and output voltage being mutually equivalent means that value of closed loop voltage gain is unity or one i.e.

The mathematical method of ascertaining closed loop voltage gain is that if the value of R2 is considered zero, and value of R1 as being infinity, voltage follower gain can be determined by using the voltage gain equation of non- inverting amplifier.

Thus, voltage follower is a perfect follower circuit which generates output voltages which are exactly equal to input voltages. Besides, maximum negative feedback produces such closed loop input impedance, the value of which is quite high as compared to opened loop input impedance. Thus, closed loop impedance also ensues via this maximum negative feedback, the value of which is quite low as compared to opened loop output impedance. Thus, we almost get a complete technique for the purpose of converting a high impedance source to a low impedance source. 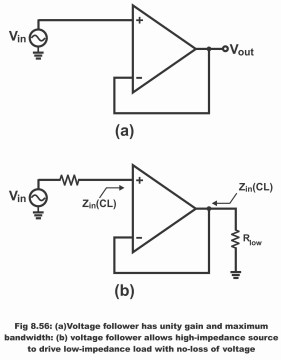 In figure (b) the concept has been elucidated wherein an input AC source consists of high input impedance R high while load has low impedance RLOW.

As negative feedback of a voltage follower is maximum (that’s 100% of output feedback on inverting input), therefore closed loop input impedance (Zin (CL) is high to an unbelievable extent whereas closed loop output impedance Zout (CL) is incredibly low. As a consequence, all input source voltages appear parallel to load resistor. Thus, input and output voltages of a voltage follower are considered identical for practical purposes. In figure 8.57, a practical application of a voltage follower has been shown for enlightenment. In figure (A) a signal source (output resistance of which is 50KΩ), has been connected with an amplifier (the input resistance of which is 15KΩ). If the value of an applied signal is 1V, only 230mV will appear on amplifier’s input while remaining 770mV drop parallel to the output resistance of signal source. 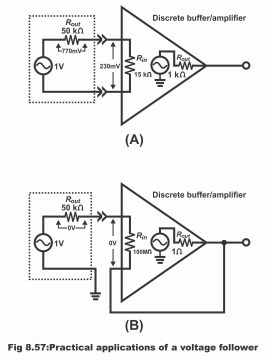 However, if the same signal source is connected with some specific amplifier voltage follower (input resistance of which is 100MΩ), as has been exemplified in the figure (B), the whole input signal will be received on amplifier’s input.