What is C++ ARRAY

A C++ Array is a powerful data structure for storing and manipulating large block of data. It is a group of related memory locations. These locations are arranged in sequence and referred to by a single name. So in this way, we can avoid having to make names for numerous items. The values in an array can either be character or numerical quantities. However, the values in an array must all be the same type i.e. all numeric or all characters.

Arrays are used to process a large amount of data of the same type. The data is stored in an array. The array is accessed by a single variable name. The index values are used to access individual elements of the array. A few statements are required to process data in an array. Therefore, the use of arrays in a program reduces size of the program. Arrays are divided into two types. These are:

One dimensional array is also known as a list or a linear array. It consists of only one column or one row. 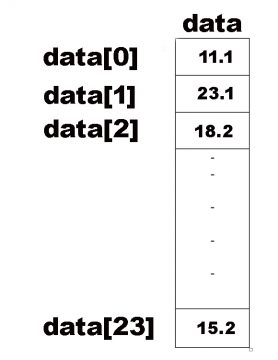 The above array data contains real type data. It has 24 elements. The first element of the array is data[0] that is in position 0 and data[1] is the 2nd element of array and is in position 1. Similarly 24th element is the last element and its reference is data[23].

Like other variables an array is also declared. Defining the name of array its type and the total number of element of an array is called declaring of the array. When an array is declared a memory block with required number of location is reserved in the computer memory for storing the data into elements of array.

The general syntax to declare a one dimensional array is:

‘n’ is an unsigned integer value. It represents the total number of elements of the array.

To declare a one-dimensional array “data” of type double with 24 elements, the statement is written as:

Similarly, to declare a one-dimensional array with array name “abc” having five elements and of integer type, the statement is written as:

Input/output Data in One dimensional array

Example write a program which take data as input and show that data in reverse order:

Example write a program which take data as input and show there sum and average of the data:

Example write a program which find the maximum number in one dimensional C++ array :

Like other variables, the values in the elements of an array can also be assigned when the array is declared. The assigning of values to the elements of the array at the time of its declaration is called initializing of the array. For example, to declare an array “data” of type double with 5 elements, with value  44.3, 88.7, 22.2, 11.9 and 66.3 in elements data[0],  data[1],  data[2], data[3], data[4] respectively, the statement is written as:

The values on the right-hand-side enclosed in curly brackets are assigned to the elements of  the array in the order in which they are written.

If the number of elements in an array is greater than the values in the list then the remaining last elements are initialized to zero.

example Write a program to initialize the values in an array and then printing these values on the screen.

Example: how to write a which sort the array in ascending order using one dimensional array:

A multi-dimensional array is an array of more than one array.

An array that requires two subscripts to identify a particular element is also known as the double-subscripted array. Consider the following figure 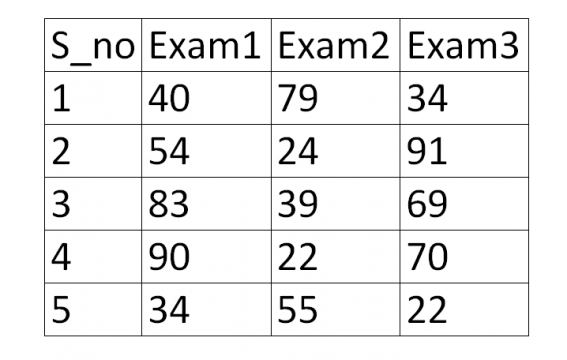 The above figure illustrates a table that has rows and columns and can best be by the use of two-dimensional array. Each row represents a different student and columns represent the score of the students in three different exams, to refer a single element in a two-dimensional array, it is necessary to refer to both row and column in which the item is located. For example, the result of the first student on the second exam appears in the first row and second column of the table. It would be specified as EXAM[1][2]. Similarly, EXAM[3][1] would be the third student’s first exam score. Notice that row reference is always list before the column reference.

So the table shown in the above figure is an example of two-dimensional [5][3] array, consisting of 5 rows and 3 columns, having 15 elements. In order to set up the required storage locations the following statement is used:

array name——represents the name of the two-dimensional array

r—-represents the total number of rows of table. It is an unsigned  number.

c ——represents the total number of columns of the table. it is an unsigned number.

C For example, to declare an integer type table “abc” having 12 and 3 columns, the declaration statement is written as:

Usually, nested loops are used to access elements of the two- dimensional array. The following program example inputs data into a table and then prints out the same data on the computer screen in tabular The table name is abc and it has two rows and 3 columns.

When the upper loop is executed first time, the values in the first row and all its columns are entered and the value of “r” is incremented by 1.

Example: how to write a program which find the sum of  matrix using multi-dimensional C++ array:

Assigning values to the elements of a table at the time of declaration is called initializing of the table.

For example, to assign values to a table abc[2][3] that has two rows and three columns, values are assigned row-wise.

The declaration and initialization in the above table will be:

Example: how to write a program which print data in tabular form using multi-dimensional C++ array:

The values in a table of char” type is also assigned in the same way as in int, float or double type tables. For example:

Each character is enclosed in single quotation marks.

The variable “st” can also be treated as a string array. In case it is taken as an array of string type, it has the capacity to store five strings each of 3 characters including null characters. Thus only two characters can be stored in each string and the null character is automatically inserted at the end.

To initialize the above data, the variable “st” is declared and initialized as:

Values assigned to string variables are enclosed in double quotation marks and are separated by commas. The length of the string is 4 characters.

Example: how to write a program which take data as a string and then print on screen using multi-dimensional C++ array: