A circuit that makes a comparison between two input signals or voltage levels is known as a comparator. In other words, if an operational amplifier is operated in an open looped mode (i.e. from output to input without any feedback), such a circuit is known as a voltage comparator. In figure 8.58, a comparator has been displayed. As there is no need to connect any additional external components along with a comparator, therefore its circuit is extremely simple. Basically, a comparator’s output reveals which of its two inputs is a high potential. 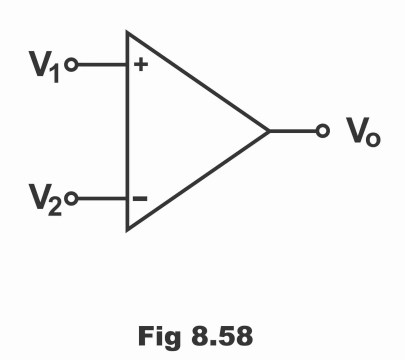 We know that an operational amplifier is usually used in closed-loop mode (i.e. along with feedback), so that its voltage gain could be controlled accurately with the coordination of exterior components. It is never being used in open loop mode; because it’s extremely high open loop voltage saturates its output via any reasonable input signal. In order to understand how a comparator does compare two input signals and provides out on this base, the study of circuit shown in figure 8.59 is essential. 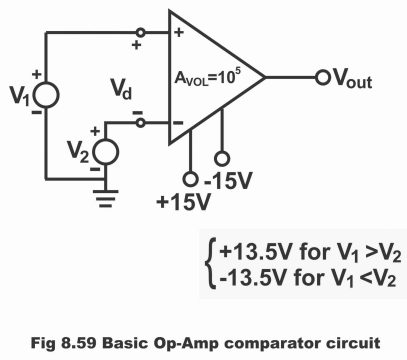 When operational circuit is applied without any feedback, it works as a comparator as is vivid from figure 8.59. In situation of amplifiers’ inverting input being grounded, minimum input voltages are required for its saturation. Thus, if differential gain of an operational amplifier is AVOL, minimum differential voltages (Vd) required for the purpose of its saturation can be determined via the following formula:

Suppose if power supply is , the output swings between +13.5 to -13.5 (that’s output fluctuates between )If the open loop gain of an operational amplifier is 105, in such a situation, the minimum input voltage, on which saturation starts, will be as follows: 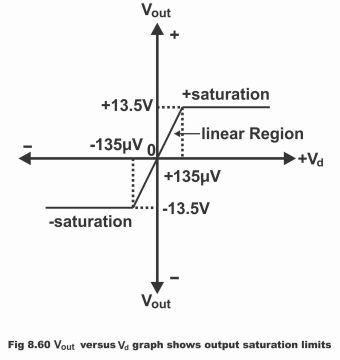 There are several applications or uses of a comparator, out of which two of the uses have been illustrated in figure 8.61. The circuit shown in figure (A) is called zero crossing detectors, because when es cross waveform 0V, eout swing from one saturation level to another. When es are positive, the value of eout tends to be +13.5V. When the value of es is lower than zero volts (0V), the value of eout becomes -13.5V. When es values rise above 0V, eout value gets back to +13.5V.

The circuit shown in figure (B) is called a level detector. When input signal (ein) is lower than a DC reference level (EREF), this level detector immediately identifies the situation (i.e. level detector identifies or recognizes two different levels). DC reference (EREF) has been connected with positive input whereas ein has been supplied with negative input. As long as value of ein is high as compared to EREF, up to that point operational amplifier’s output keeps saturated on -13.5V. However, when ein value is lower than EREF, amplifiers’ output keeps saturated on +13.5V. The output of a level detector can also be used to operate an alarm or its output can be transferred to a computer as well, so that alarm could be turned on as level changes or the operation could be stopped through a computer. 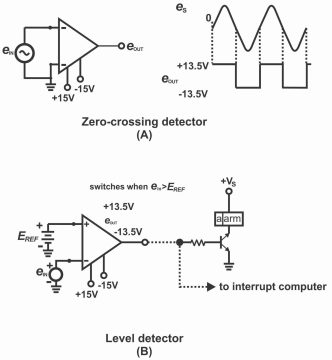 Introduction to the 741 OP AMP, Circuit Diagram, and working