Megger is used for the measurement of insulation resistance. It also measures the resistance of the insulator. The megger measures insulation or high resistance in terms of mega ohms. There are different types of megger instruments depending upon on the voltage rating such as:

Insulation in simple terms means that it is offering some resistance to the current or heat flow. The insulation resistance of all appliances should be checked at regular interval of time because it gives the information about the condition of the appliance or wire. The insulation resistance depends upon the moisture, temperature, test voltage and duration of the appliance. The internal resistance of the wire is very less due to which the current easily flow in it.  On wire we have small or thin coat of rubber like a synthetic material which is called insulation and without this insulation what will happened? If the wire has no insulation and it touches the equipment body or if a human touch this wire there will be flow of electric current and causing electric shock. So for this reason the wires covered with insulation. So this in mind insulation is a material which offers very high resistance to the flow of electricity. Insulation offers resistance to the leakage current.

Why we perform megger test?

The insulation resistance check the insulation quality of the electrical system and to avoid any major or minor electrical shocks to operator. In over time it may happen due to damage or moisture or contamination when we have leaking of current from the conductor. It can cause various issues like light tripping because moisture going into the walls that will allows the electricity to jump out of the conductor and trip a switch, We can also see this issue in portable appliance like electric kettle which has metal casing so if we have issue in insulation. So by touching the appliance we will feel shock.

The parts of the megger are shown below, the armature of the generator is rotated by the hand driven crank lever. The clutch mechanism is designed to slip at predetermined speed. This facilitates the generator to maintain the constant speed and hence the constant voltage to while testing the two coils A and B constitute a moving voltmeter and an ammeter both are combine to form one instrument. The hot terminal of the equipment whose insulation resistance is to be measured is connected to the testing terminal X. The terminal Y is connected to the body of the instrument which is generally grounded. When the crank handle will be rotated the voltage will be generated in the generator. The megger can generate up to 1000V with the help of generator present in it. The generator voltage is applied across the coil A through resistance R1. When the terminal X and Y are free initially no current flow through the coil B. The torque produce by the coil A rotates the moving element to show infinity.

As the voltage increases the in external circuit the deflection of the pointer increases of current.  This shows that when current increases the resistance will decreases and vice versa.

Working Principal of the meggar:

The principal of megger is based on the moving coil in the instrument. When current is flowing in a conductor which is placed in magnetic field it will experience a torque.

A torque is developed due to the interaction of the current flowing through the pressure coil and current coil. Flux is produced by the permanent magnet. The deflection of these coils is proportional to the resistance to be measured.

Torque developed due to current in the pressure coil.

I1=torque developed to current in coil 1
I2=torque developed to current in coil 2
Both the torques will be equal.
T1= T2
Due to the interaction current flowing through the pressure coil and current coil. The torque will be develop due to the current flowing in the pressure coil and current coil.
Φ I1 cos⁡ɵ = Φ I2 sin⁡ɵ
tan⁡ɵ = I1/I2
I1 = V/R
I2 = V/R^+RT
tan⁡ɵ = I1/I2
tan⁡ɵ = (V/R )/(V/R^, +RT )
Since R and R’ are constant therefore
ɵ ⍺ RT

Where ɵ represent the deflection and is directly proportional to the unknown resistance.

How to use megger?

The megger send test voltage to see whether there is leakage current in the wire or not passing through the insulation.

While testing the terminal X and Y are connected across the terminals and body of machine for the measurement. Now the current passes through the deflecting coil B. The deflecting torque produce by the coil interacts with the torque of the coil A rotates the element to indicate the resistance value. Voltage generated by this instrument is around 500 Volts. This generated voltage or current will move in wire or insulator whose resistance we want to measures. The combination of this voltage and current will produce resistance which will be show on the megger.

Checking the voltage of the megger:

Now a question may be arising in our mind that during generation of the voltage if we touch our hand with the wire of the generator what will happened?

The dc generator which is used in the megger having thin wire in the winding due to which the current generated will be less. So due to which we will not feel any shock.

Insulation test of transformer with megger: 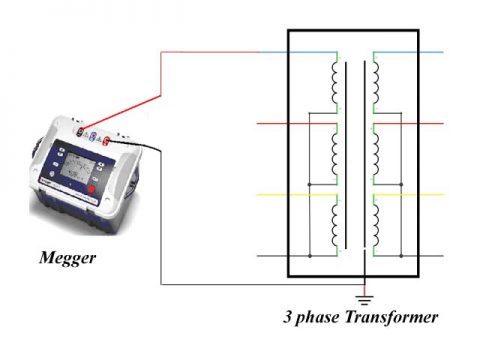 Megger is used to measures the insulation resistance of the:

There are two types of megger:

Electronic megger is safe and robust to use. It is very handy and we can carry easily from one place to another place. Its operation time is very less during testing. 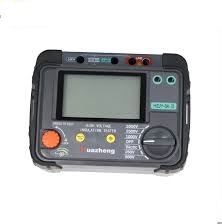 Apart from the so many advantages it also has some disadvantages which are:

This type of the megger is manually operated with the help of the hand and gives output in analogue form. Its rpm is usually 160 which are produce by rotating the crank handle. In manual megger we create dc voltage by rotating the handle. It consists of:

The manual megger operates without any external source. In emergency choice it can be excellent choice. It is cheaper than electrical megger. 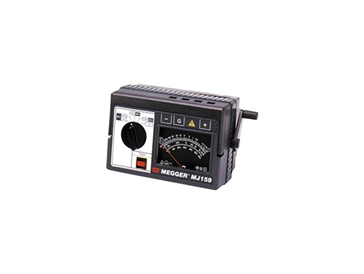