A microcontroller is a small computer built on a single integrated circuit or chip and it contains the core processor, the memory and the input/output peripherals. The memory in the microcontroller is divided into two parts one is your RAM which is used during the execution of the code and other one is the flash memory in which your program code resides. So whenever you burn your program code into your microcontroller. It will go directly into the flash memory of your microcontroller. The basic difference between a microprocessor and a microcontroller is that the microprocessor has no on-chip memory and input/output peripherals. So microcontrollers are used everywhere where you want a task to be automated. They are used in your home appliances like washing machines, microwave ovens, air conditioners and mobile phones. They are also used in automation industrial automation artificial intelligence robotics and some years ago. They are not used for high voltage applications like home or industrial automation where we have to control the high voltages like 220 volt or above 220 volt because our generic relays or the electromechanical relays have a disadvantage of producing back EMF net can damage our microcontroller but as a time passed the solid-state relays come into the picture. the solid-state relays means the semiconductor relays in which MOSFETs and FETs are used for controlling the switching operation and the solid-state relays provides the optical isolation that optically isolates the high voltage. So they are preferred over the electromechanical relays. 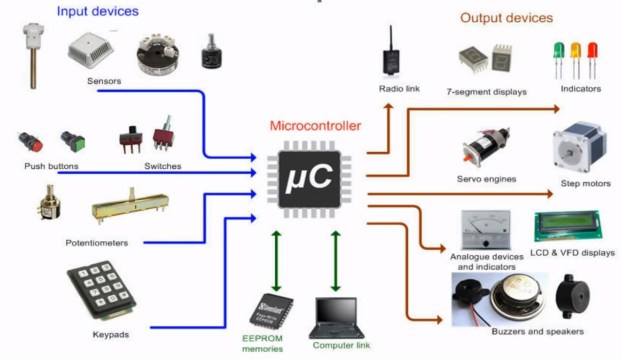 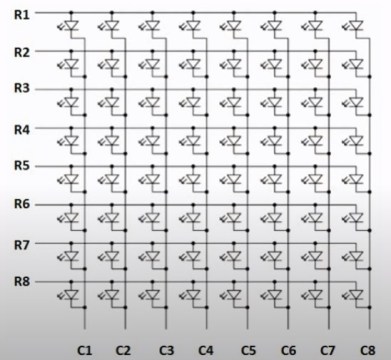 Further you can connect it to some GSM modem device where it can send some SMS alerts to the user so it can do multiple tasks. Here is another example of using microcontrollers in your home automation there are some sensors interfaces to the microcontroller like LPG gas sensor temperature sensor the infrared sensors. The light sensors video or image sensor and by reading this data the microcontroller will process the input data and control some output operations like sending SMS alerts to the user through GSM or controlling the lights and fans by using the relays or generating some alarms or displaying some values on the LCD display.

So here is our first microcontroller that is Intel’s 8051 that is based on a Howard architecture and RISC instruction set. These chips are used in a wide variety of control systems telecom applications robotics as well in the automotive industry and it is one of the most popular general-purpose microcontrollers that we use today and here is some basic information about the 8051 microcontroller and as it has 8 bit ALU and 16 bit address bus and 8 bit data bus 4 kilobytes of on-chip program memory which is 8 kilobytes in 8052 to 128 bytes of on chip RAM 32 input/output lines and full duplex UART and 6 interrupt sources. The 8051 on microcontroller is produced by many manufacturers some of them are Atmel, Intel, Philips which is an XP, sharp, Texas Instruments, maximum Dallas.

Transmitter as communication is not synchronous the receiver and transmitter operate at same speed or same baud rate and the data byte is framed between these start and stop bits to indicate the start of data byte and end of data byte and you cannot connect more than two channels on the UART bus if we want a secure transmission.

The 8051 has four important ports. Port 0, Port 1, Port 2 and Port 3. These ports allow the microcontroller to connect with the outside world. Each port has 8 pins thus the four ports joint comprise 32 pins. All ports are bidirectional each port has a latch and driver. When external memory is employed the port 0 lines will function as multiplexed low byte address / data lines and port lines will function as high byte address lines. 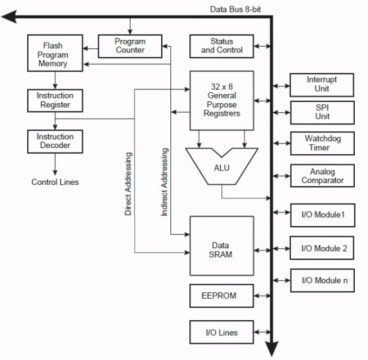 ATtiny series from Atmel provides small size and less costly microcontrollers for small applications. But their performance is same as other AVR microcontrollers. They contain less memory, less I/O pins.

ATmega series is very popular. Most of the students use microcontrollers of this series for their projects. They are also used in industries. They have large memory size, more I/O pins and more number of inbuilt peripherals. They are designed for medium level application (ATMEGA 328).

Features of the PIC microcontrollers:

Here are some important features of the PIC microcontrollers which are very similar to the AVR. 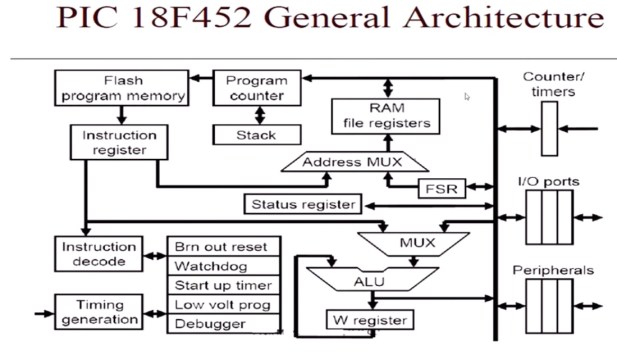 They are divided into three categories: