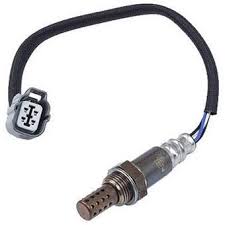 The sensing element at the front of the sensor consists of a zirconium dioxide sensing element enclosed within steel shall. Platinium electrodes are connected with the sensing element and wire leads down the line. Exhaust gases consisting of oxygen molecules contacts the sensing element after flowing through the slots/holes on the steel shell. Outside air is made to flow through the contacting cables. The air is then heated to enable the ions to produce voltage. The difference in the concentration of oxygen molecules in the exhaust gas and the ambient air drives the oxygen ions from higher concentration to lower concentration. Due to the movement of oxygen ions from one plutonium layer to the other, a potential difference is generated. The voltage surges up to about 0.9 by the rich mixture. on the contrary lean mixture drops the voltage down to 0.1V. These voltage signals are feed to the engine control. The ECU compares it with pre-stored standard data to decide whether the mixture is rich or lean.  During subsequent stroke to manipulate the air/fuel ratio these calculations will be used.

The working principle of the sensor is to check the oxygen amount between the atmosphere and within the exhaust system of the vehicle. The difference in the oxygen level a reaction will take place due to which voltage will be produced. The voltage produce will depend on the oxygen difference. For good ignition of the fuel, the oxygen is added. The communication of this sensor can be done with help of a voltage signal. The computer of the car will decide the oxygen status in the exhaust. The computer regulates the mixture of the fuel or oxygen delivered to the car engine. The arrangement of the sensor before and after the catalytic converter permits to maintain the hygiene of the exhaust and check the converter efficiency.

One wire of the oxygen sensor will be a signal wire that is the wire that sends the voltage signal from your sensor to the car computer and the sensor receive the ground by being screwed into the exhaust manifold and the exhaust manifold gets his ground by being attached to car engine. The car engine is grounded by the cable attached the chesses and the chesses is grounded by the negative terminal of the battery. If the ground circuit fails about seven components will stop working.

The oxygen sensor has two wires the ground wire is directly connected with the PCM. Now the sensing element in these sensors does not reach operating temperature until it reaches about 600 degrees Fahrenheit and they can take a while if a car computer does not have a signal from the oxygen sensor. It will not run efficiently and it will negatively affect the MPG. So car manufacture in order to heat these up faster decides to add a little heating circuit into these sensors. These sensors with the heating circuits came either with three wires or four wires. The three wires oxygen sensors receives a constant voltage from car fuse box or junction box and it is switched on and off by the ground wire which is connected with the PCM. The sensor has a signal wire but it does not have a ground wire for the sensing element. It is grounded again through the exhaust manifold.

Narrow band oxygen sensor inform the ECU whether the engine is running lean or rise with the reference to the stoichiometric air fuel ratio.

When the oxygen starts to fail it exhibits a few symptoms. Some of them are as follows:

The check engine light will illuminate if we have bad or failing oxygen. As soon as the light comes on contact a professional automotive technician for a check engine light inspection. This light comes on for many different reasons so it is important to have it looked at by a professional who can correctly diagnose the exact cause if you have higher mileage vehicle there is a good chance it has a bad oxygen sensor in need of replacement.

If the oxygen sensor is not working properly fuel combustion systems and the fuel delivery will be thrown off.  A bad oxygen sensor can cause a vehicle to spray more fuel than necessary. If a bad gas sensor disrupts the air to fuel ratio mixture or too much fuel is injected into the vehicle gas millage will be reduced.  A rotten egg smell and black smoke exhaust will be produce due to the excess fuel in the engine. If yourself filling up your gas tank more often, keep a record of how many gallons you fill up and how often. Rotten egg smell is sign of bad oxygen or bad catalytic converter.

A bad sensor can disrupts these engine sensors functions causing a rough or irregular engine idle and other engine related issues.

A bad oxygen sensor can affect the sensor mileage. Use the mileage feature and see how much miles you are getting on a full tank of gas. Calculate the mileage each time you fill your gas.

When to replace the oxygen sensor:

If your vehicles were manufactured within the past 15 years the oxygen sensor should be replaced every 60000 to 90000 miles. This sensor wears out and will need replacement over time. Replacement of failing oxygen sensor or bad will keep your engine running smoothly and properly. It will reduce the toxic emissions. The oxygen sensor helps your vehicle run efficient and reduce emission number

How to test Oxygen sensor:

First we will test the heating circuit in this sensor and the two wires for the heating circuits are usually the same colour. Usually either black, white or sometime gray. We will go to do resistance check of this sensor so we grabbed our multimeter put it on the resistance and choose the 200 value. In the four wire oxygen sensor two wires are for heater circuit and two wires for oxygen sensor to produce the voltage. Now the reading we are expecting to see is obviously going to be different sensor to sensor. We will connect the probes of the multimeter with the two leads which are usually white leads then we should have a resistance that will tell us if our heating element is good. So first we will check heating element for resistance connect the two white or black wires with the multimeter. If we obtain some value of the resistance then it will show that the sensor is working properly. But if we obtain infinite resistance then it means that the oxygen sensor is damage. 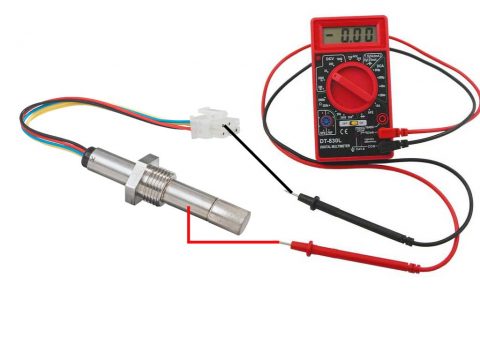 KE-25 is galvanic type of oxygen sensors. This sensor has excellent chemical durability and exceptionally long life. It should be about 0 to 70 millivolt pretty small voltage. It is very hard to read this voltage by the controller so we will first amplify the voltage before give it to the Arduino.

We will measure the output of this sensor using multimeter. It reads about to 3.5mV which is very small signal to read this signal with the Arduino we will first amplify it. Using LM358 IC we will amplify the signal about 11 times of the original signal.

The resistor arrangements will decide that how many times the signal should be amplified. Connect pin number 8 with the battery supply and pin number 4 with the ground. One terminal of the KE-25 Oxygen sensor with pin number 3 of the LM358 while other terminal of the sensor will be connected with the ground terminal. The output of the LM358 will be connected with the analogue pin A0 of the Arduino. In the circuit diagram, I forgot to connect the GND wire with the GND pin of the Arduino. You should connect the GND wire of the circuit with the Arduino, otherwise the circuit won’t work.