PCA9685 Servo Driver with Arduino- We often need to use Servos in our projects, without a servo driver we can control just a few servos because we have less number of pwm pins in Arduino Uno and Arduino Nano. There are times when we need to control more Servos then in a situation like this we will need more pwm pins. Thanks to the PWM PCA9685 Servo Driver which can control multiple Servos using only two wires, because it uses the I2C bus. In this article we will look at how you can control up to 16 servos with your Arduino board using a PCA9685 Servo Driver module. PCA9685 is a 16-Channel and 12-Bit PWM Servo Driver can help a lot when there are insufficient PWM output pins for the MCU in your project. The only condition is that the main control chip supports I2C communication, which means enabling the communication between the chip and PCA9685 Servo Driver, so as to control multiple servos simultaneously.

The Arduino UNO has only 6 PWM pins that you can use for controlling servos but by adding one of these modules you can control up to 16 servos. You can add multiple PCA9685 modules to control even more servos but for this tutorial we will stick with just one also this module uses I2C communication. So it only takes up two of your Arduino pins A4 and A5. OE – Output enable. Can be used to quickly disable all outputs. When this pin is low all pins are enabled. When the pin is high the outputs are disabled. Pulled low by default so it’s an optional pin! There are two sets of control input pins on either side. Both sides of the pins are identical! Use whichever side you like, you can also easily chain by connecting up two side-by-sides. There are 16 output ports. Each port has 3 pins: V+, GND and the PWM output. Each PWM runs completely independently but they must all have the same PWM frequency. That is, for LEDs you probably want 1.0 KHz but servos need 60 Hz – so you cannot use half for LEDs @ 1.0 KHz and half @ 60 Hz.

The first thing we need to do is connect our PCA9685 Servo Driver module to our Arduino board.

Let’s get started for this tutorial I will be using an Arduino Nano and I will be using two servos but when we get to the Arduino sketch I will show you how to add more.

Adding the library to the Arduino IDE:

Now let’s move on to the sketch the first thing we will need to do is get the library that we will be using. I tried out the Adafruit library that most people use but found that the HCPA9685 library is much easier to use and just as powerful.

After you download it open up your Arduino IDE click on sketch and under the include library tab select add zip library navigate to where you downloaded the library to and select it. 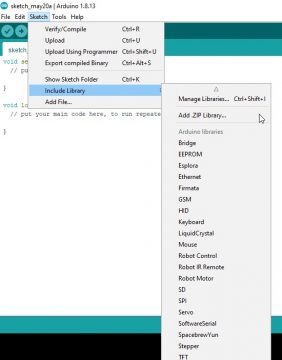 Now that the library is installed click on file under the examples tab scroll down until you find hcpca9685 and select the servo example: 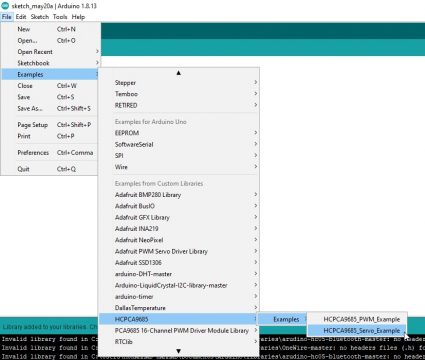 Before we go over how the sketch works let’s try it out and make sure everything’s working scroll down the sketch until you find these two lines of code in the void loop:

Now change both of the zeros to threes

Then go ahead and upload the sketch to your Arduino if everything is connected correctly your servo all connected to position 3 on the PCA9685 should be sweeping back and forth.

Next we are creating an instance of the library naming it and setting the address.

You may need to increase or decrease these numbers a little bit for your particular circle for the 9 gram servo I am using the default 10 minimum and 450 maximum works fine. The first for loop sweeps the servo up from position 10 to position 450 with a 10 millisecond delay between positions.

The second for loop does the opposite sweeping the servo down from position 450 to position 10 with a 10 millisecond delay between each position.

If you would like the servos to sweep faster or slower just change the delay time in both of the loops. Now that we have went over the example sketch.

Then simply change the three that was defining position 3 on the PCA9685 to 8 this will now write to the servo on position 15.

Next do the same thing in the second for loop now instead of just one servo sweeping back and forth both servos will sweep.