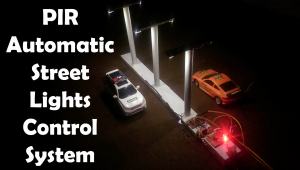 Automatic Street Lights- In today’s tutorial, you will learn how to make an automatic street lights control system using only a PIR sensor. PIR Sensor is one of the most commonly used sensors for motion detection. You can also use a laser-based car detection system. But I will be using a PIR sensor. This is the second part of the car parking system.

The first part was based on the car parking slots monitoring system using infrared sensors and a computer application designed in vb.net.  “watch this tutorial”

A few months back I uploaded two tutorials on the PIR sensor. In the first tutorial, I covered all the basics, including the pinouts, the purpose of the variable resistors, and how to use a PIR sensor with Arduino.

While in the second tutorial I used this PIR sensor with the GSM SIM900A module and designed a security system. The links are given in the description, if in case you want to watch these tutorials.

In this tutorial, we are not using Arduino or any other microcontroller. We will only be using a PIR sensor to control the street lights. This tutorial covers

The relay driver circuit simply consists of the 2n2222 NPN transistor and a 10k resistor.

For the complete Model designing and making watch video Tutorial given at the end of this Article.