PWM stands for pulse width modulation which consists of a square wave with the help of which we can control the up or high time. It is simple but digital way to control the digital signals that we use to vary the energy that is send to a load or to encode information within the signal.  The wave oscillation can be limit by using PWM signal maximum and minimum voltage values. The space between the maximum and minimum value is called amplitude. A cycle is the interval of the wave where you can find one full repetition the time a cycle takes to finish is called period. The frequency is 1 over a time period which gives you how many cycles are in a time unit.

We get 60% meaning that the signal is high 60% of the time. Let us consider that we have a PWM signal that oscillates between 0 and 5 volts let’s say this signal has a duty cycle of 50% something interesting will happen to the output voltage instead of being 5 volts is expected it will now be 2.5 volts simply putting it.

Generation of the PWM signal:

In this way by controlling this voltage it is possible to change the pulse width of the output waveform. So, this is a very simple way by which we can generate this PWM output signal.

Apart from that this signal can also be generated using the 555 timer IC. And we have already discussed this circuit whenever we have talked about the astable mode of operation of the 555 timer IC. So here, by changing the value of the resistance R1, it is possible to change the duty cycle of the output waveform. This circuit can be used for generating the PWM output signal. 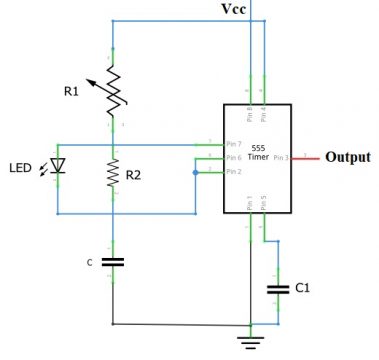 Controlling led with the PWM: 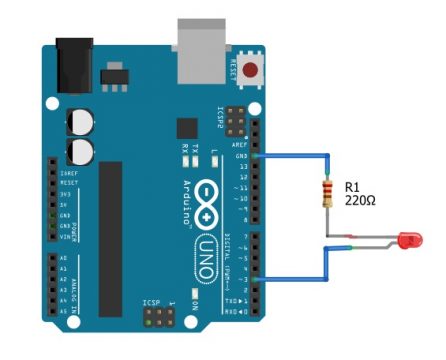 This can be done to control motors and even to create very efficient power supplies so just note that this LED is not being dimmed in an analogue fashion with a variable resistor its dimming through pulse width modulation through this microcontroller which is sending those on and off pulses to the LED. It is just that the on and off pulses are so fast within the kilohertz range meaning it is pulsing at thousands of times per second so the pulses are not visible to the human eye but the effect of the dimming and brightening of the LED is visible to the human eye because the LED in this case when it is dimmer is off more of the time and when it is brighter is on more of the time so in effect it is changing the average voltage to that LED and the good thing about this is that I can apply this not only to one led but I could use a series of transistors to apply this to much bigger loads like huge high power motors.  I can send a digital pulse width signal to speed the motor up and down but we will get into things.

We have to create a program to control the PWM port assign the port that you connected your lighting to into a variable pwm and assign it to pin number 3. Now create byte variable with pwmvalue. The reason I chose a byte variable is because the PWM in the Arduino has a resolution of 8 bits so you have 8 bits or a byte to encode the value of your duty cycle zero means zero percent and 225 means 100%. In order to control the PWM port in an Arduino you use the analog write function the first parameter is the number of the pin with which you want to control and the second is the value of the duty cycle ranging from 0 to 225 we want the PWM value to slowly increase with time for that we will increment the variable each time the program goes through the loop. In order for this process to be slow we will have to introduce a little delay 20 milliseconds should do now we do not have to reset the byte value because when it reaches its maximum or 225.

Applications of the Pulse width modulation:

The pulse width modulation technique is used to control the analog devices and mainly the power which is delivered to the analog device is controlled using this technique. Now, because of it have high efficiency, low power loss and its ability to precisely control the power, this technique is used in many applications. For example, today for dimming the LED lights, or for controlling the fan speed of the CPU, this PWM technique is preferred over the conventional methods and in some laptops, even the brightness of the screen is also controlled using this pulse width modulation technique.