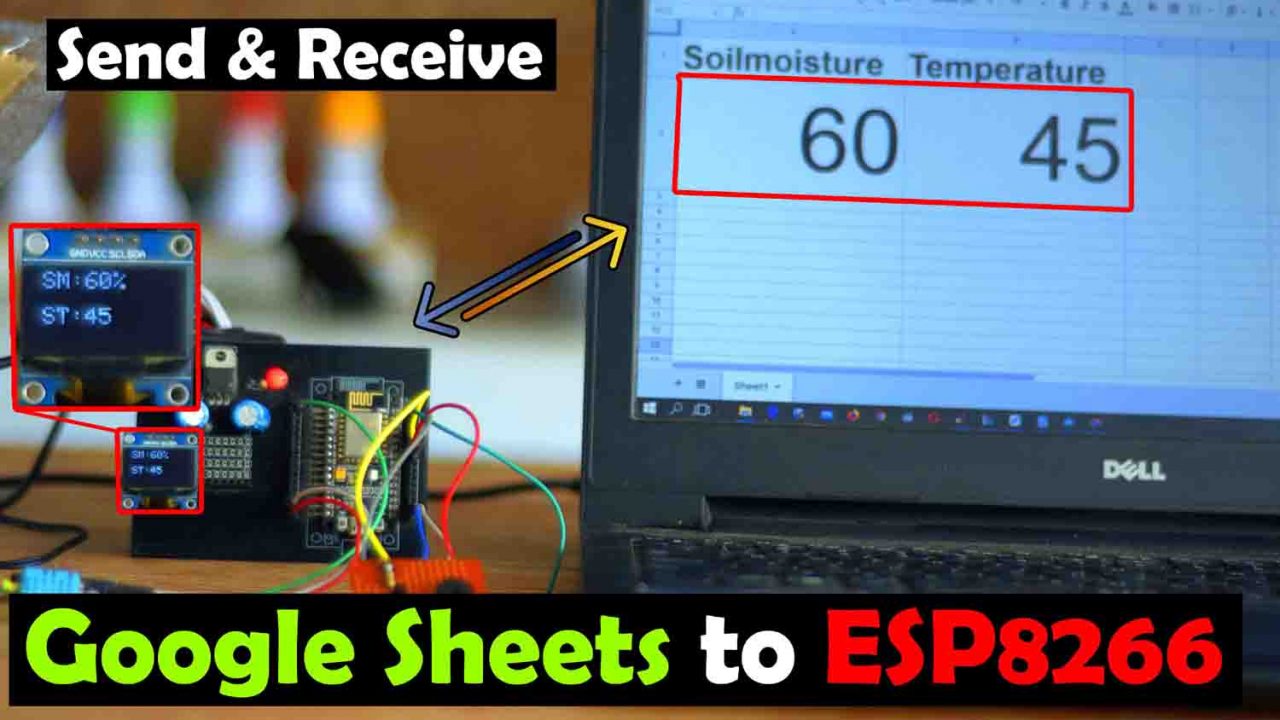 So, in this article, you will learn how to make a Soil Moisture monitoring system using Google Spreadsheet or Google Sheets, ESP8266 WiFi module or ESP32 WiFi + Bluetooth module, a Soil Moisture Sensor, if you don’t have this particular soil moisture sensor it’s ok you can use any other type of the soil moisture sensor, DHT11 Temperature & Humidity Sensor, you will also need a 5V buzzer, and an Oled display module. 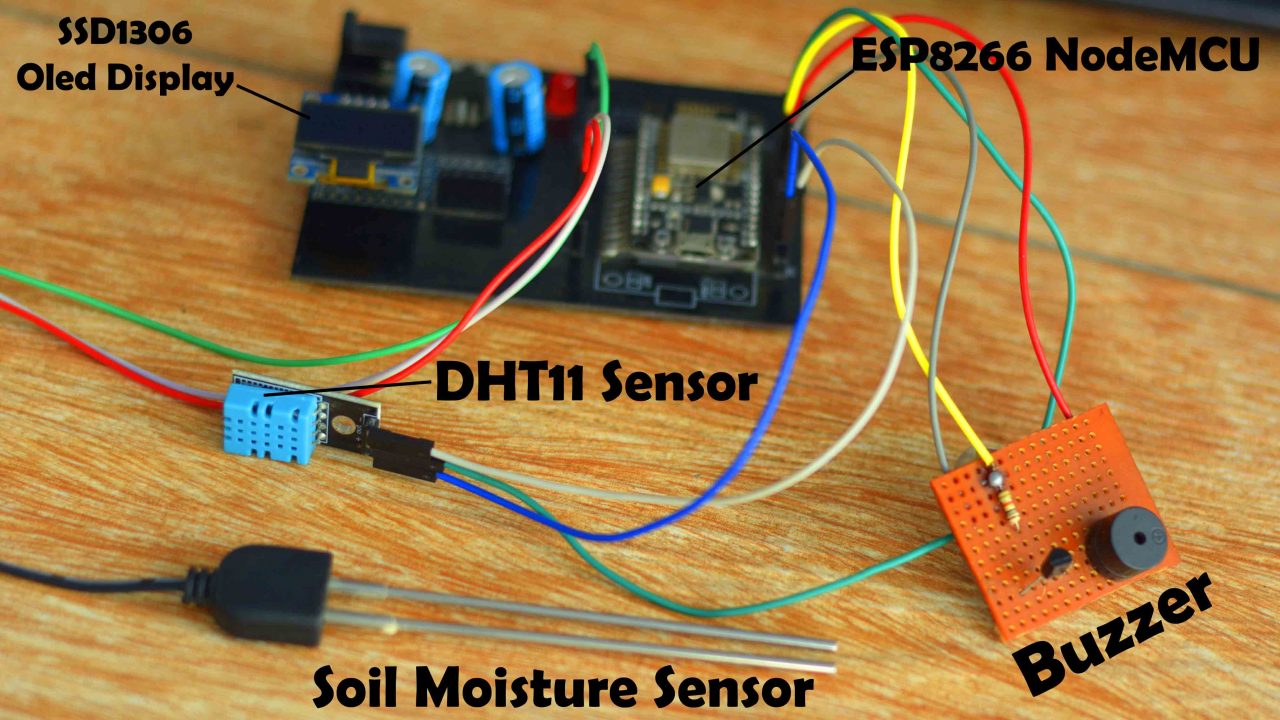 I have connected everything as per the circuit diagram which I will explain in a minute. But first I am going to explain how this project actually works and then I will start practical demonstration.

On the monitoring side, I have two Google Spreadsheets. 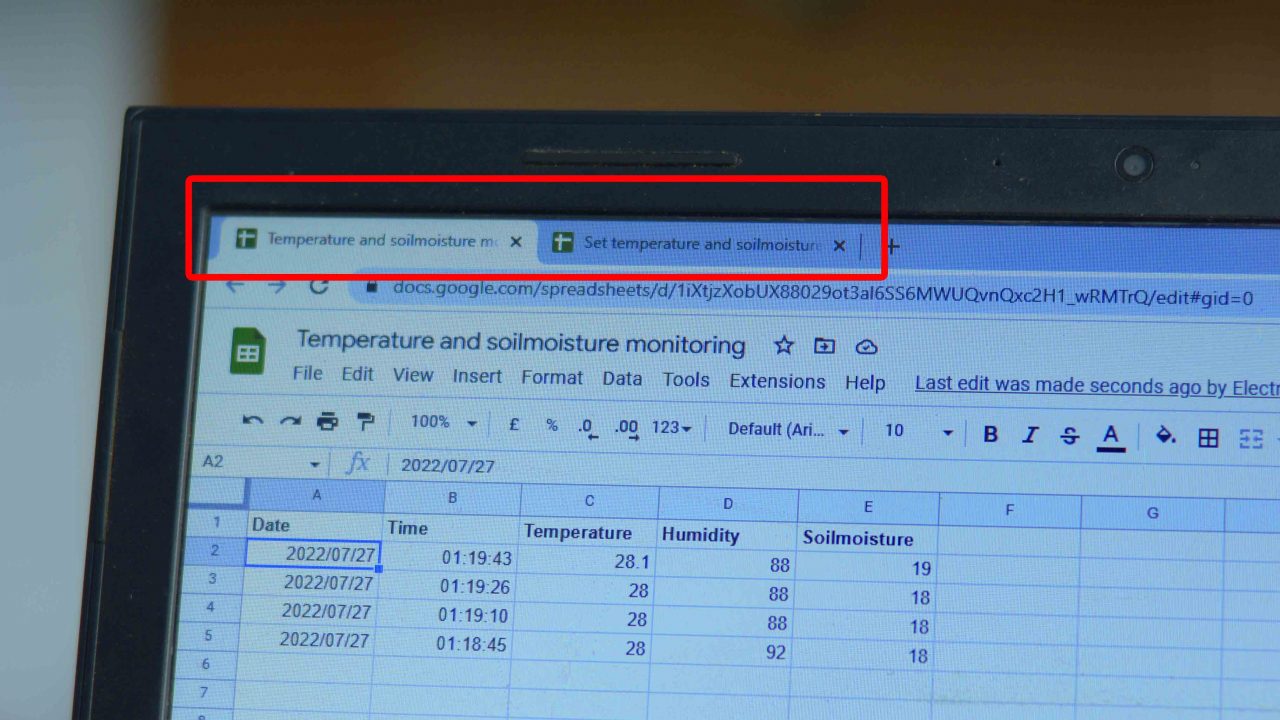 On this Google sheet I am using 5 columns for monitoring Date, Time, Temperature, Humidity, and Soil Moisture. On this Google Spreadsheet, I am receiving data from the ESP8266. 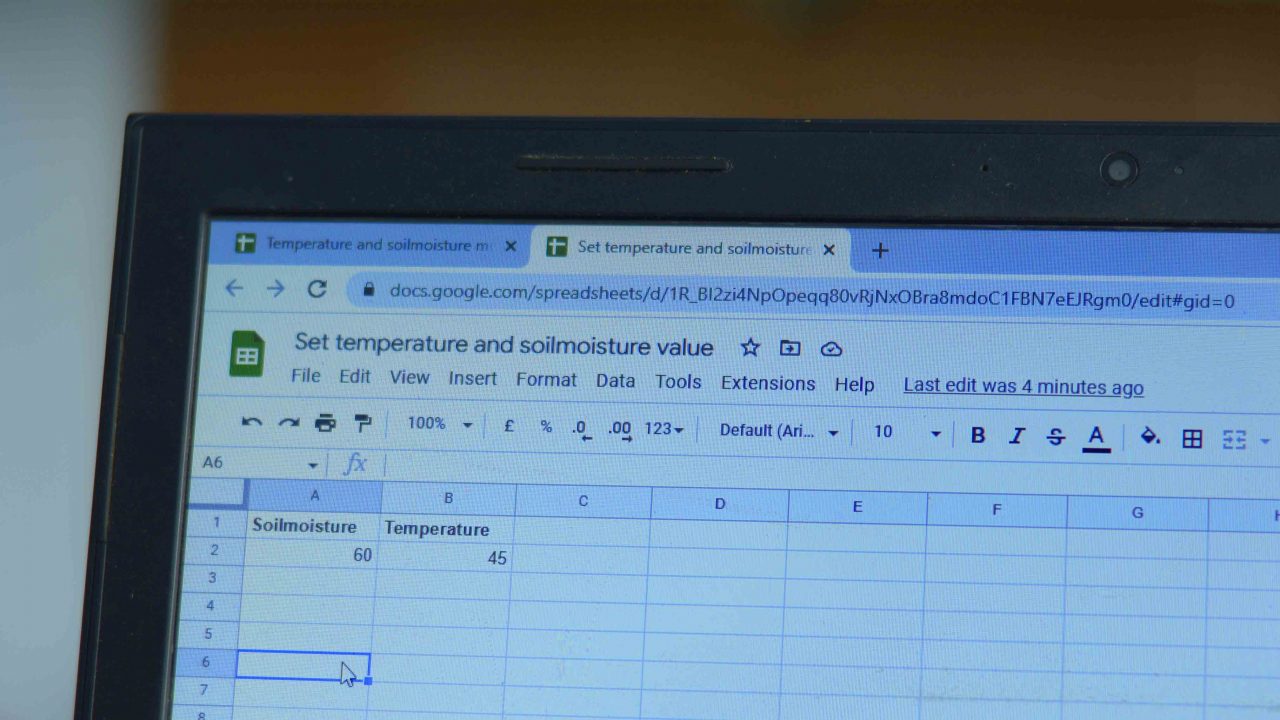 While the other Google Spreadsheet, I am using for setting the threshold values of Soil Moisture and Temperature.  Let’s say I want the buzzer to turn ON when the Soil moisture drops below 60%, then I will simply write 60 in A2 Cell, and in the same way; If I want the Led to turn ON when the temperature exceeds above 45 Degrees Celsius then I will simply write 45 in B2 Cell. To further confirm that the Google Spreadsheet actually sends these threshold values to the ESP8266, I will be displaying these values on the Oled display module. So, I will use Buzzer as an indicator when the soil moisture drops below the threshold value, and I will use the ESP8266 onboard Led as an indicator when the temperature increases above the set value or threshold value. Now, let’s go ahead and kick off our practical demonstration.

I have powered up all the electronics. Right now ESP8266 and Laptop are connected with the WiFi. After every few seconds I am receiving the Temperature, Humidity, and Soil Moisture values from the ESP8266. This time duration can be changed in the programming. 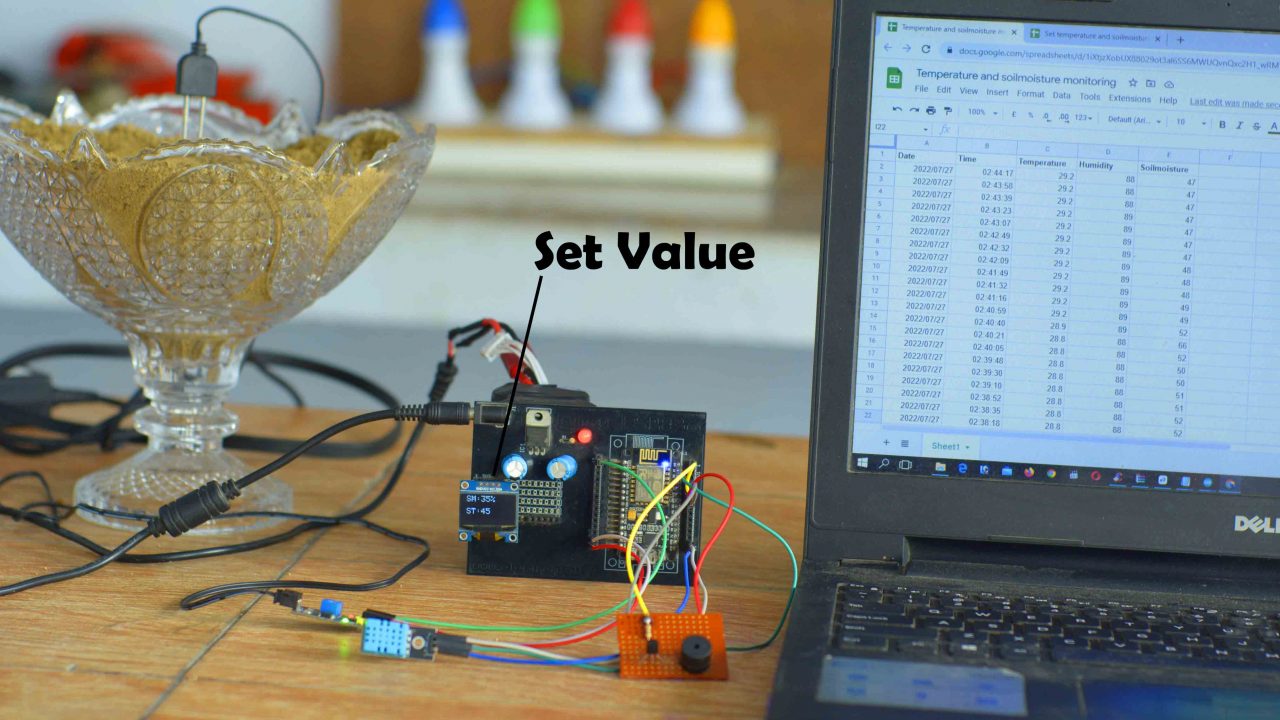 It takes a few seconds before the value is updated on the Oled display module. 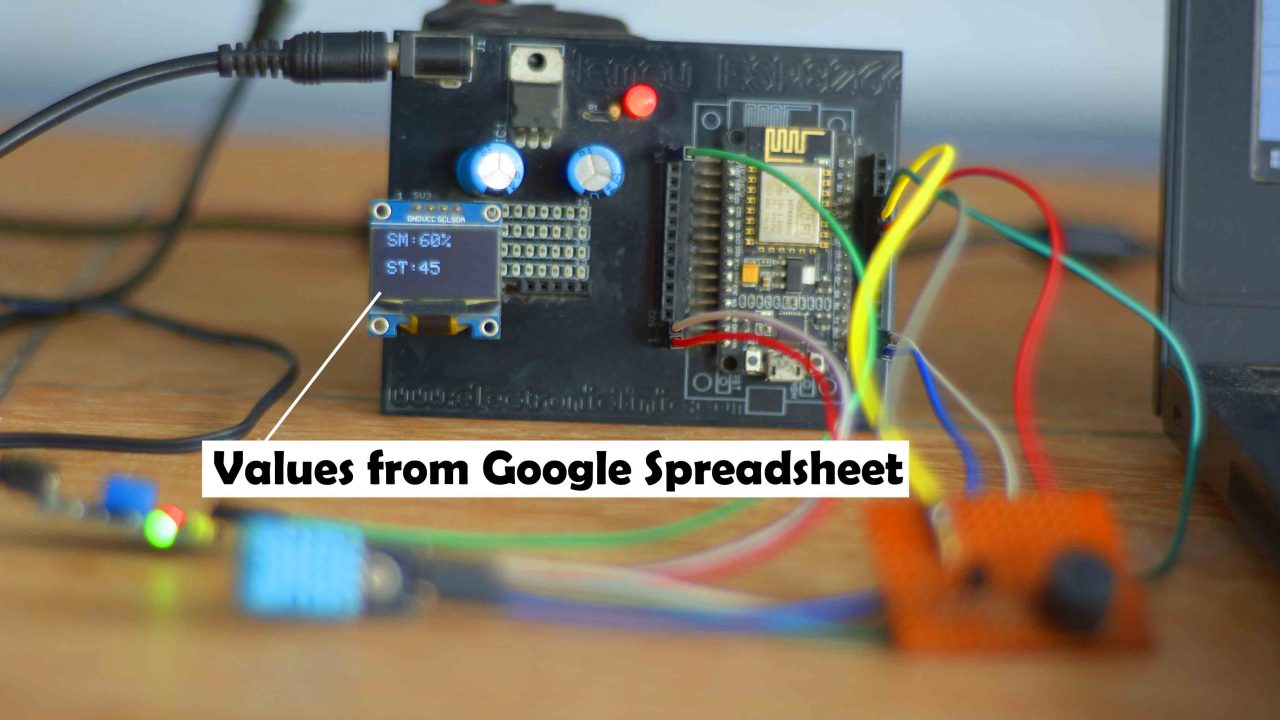 You can see the threshold value on the Oled display module is updated and also the buzzer has turned ON.

You can also see, the onboard Led is off as the temperature is below the threshold value of 45 degrees Celsius.

Now, the threshold values are set. So, now I can go ahead and add some water. 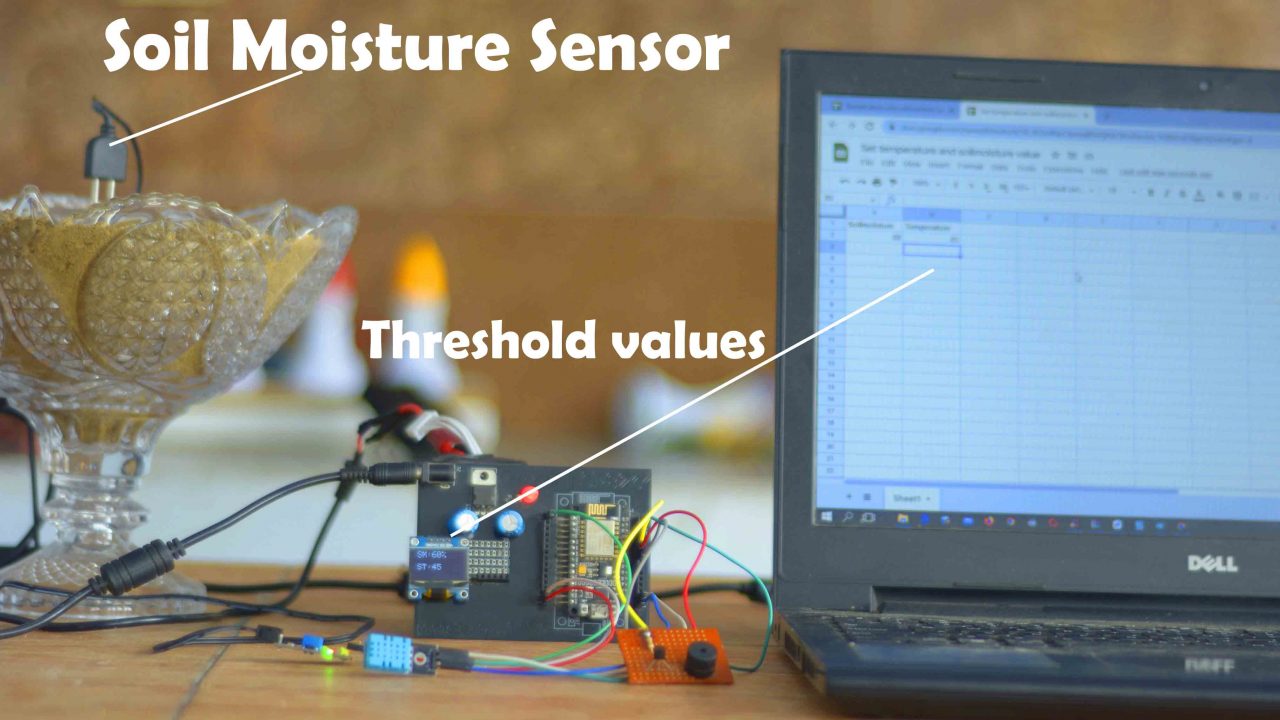 You can see the updated value of the soil moisture and the buzzer has also turned OFF. On the Google Spreadsheet I increased the fonts size, so that you can easily see the values. 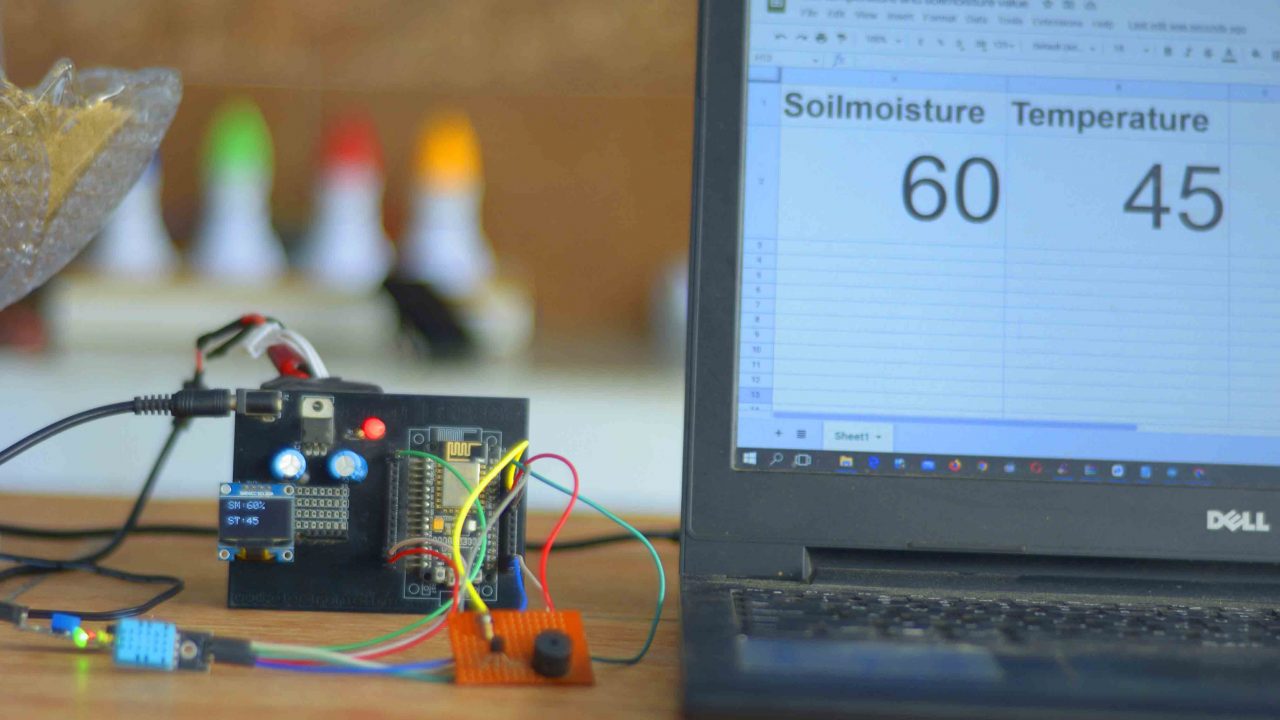 Now, I am going to apply some heat. 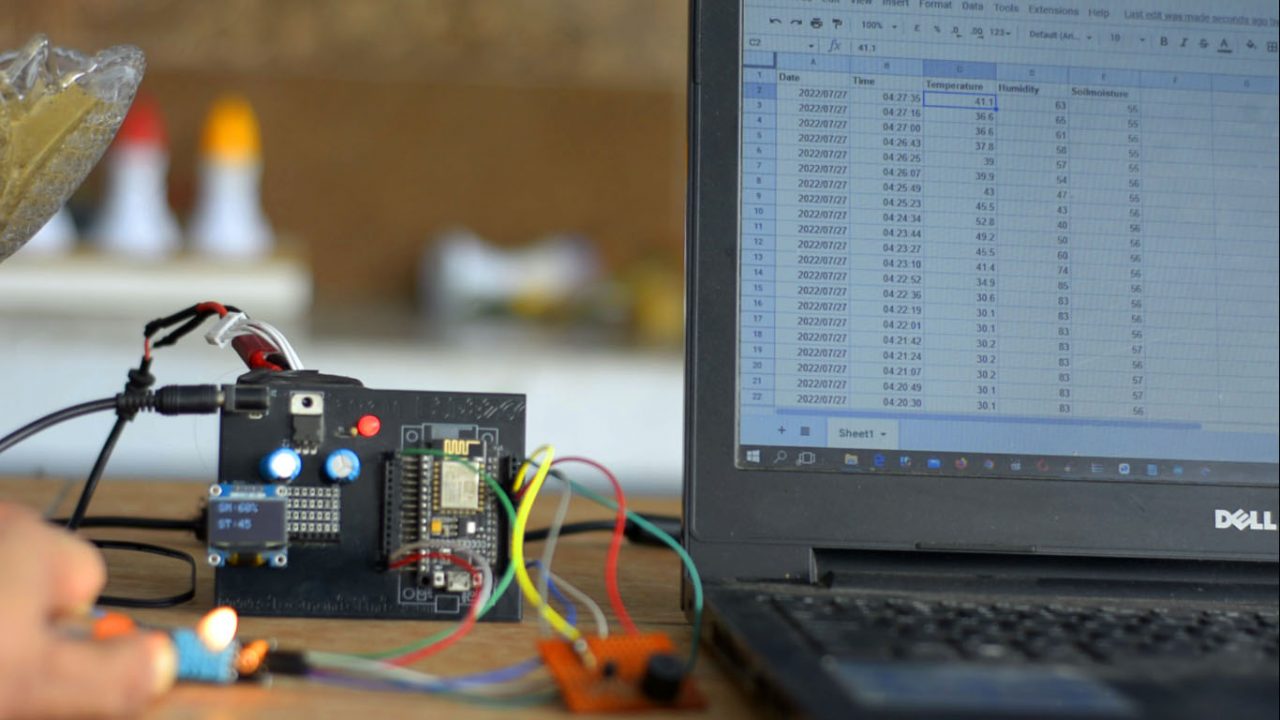 DHT11 Sensor is quite slow, it takes time to give updated readings. So, I kept applying the heat. The Nodemcu ESP8266 WiFi module onboard Led is off as the measured temperature is less than the threshold value which is 45 degrees Celsius. 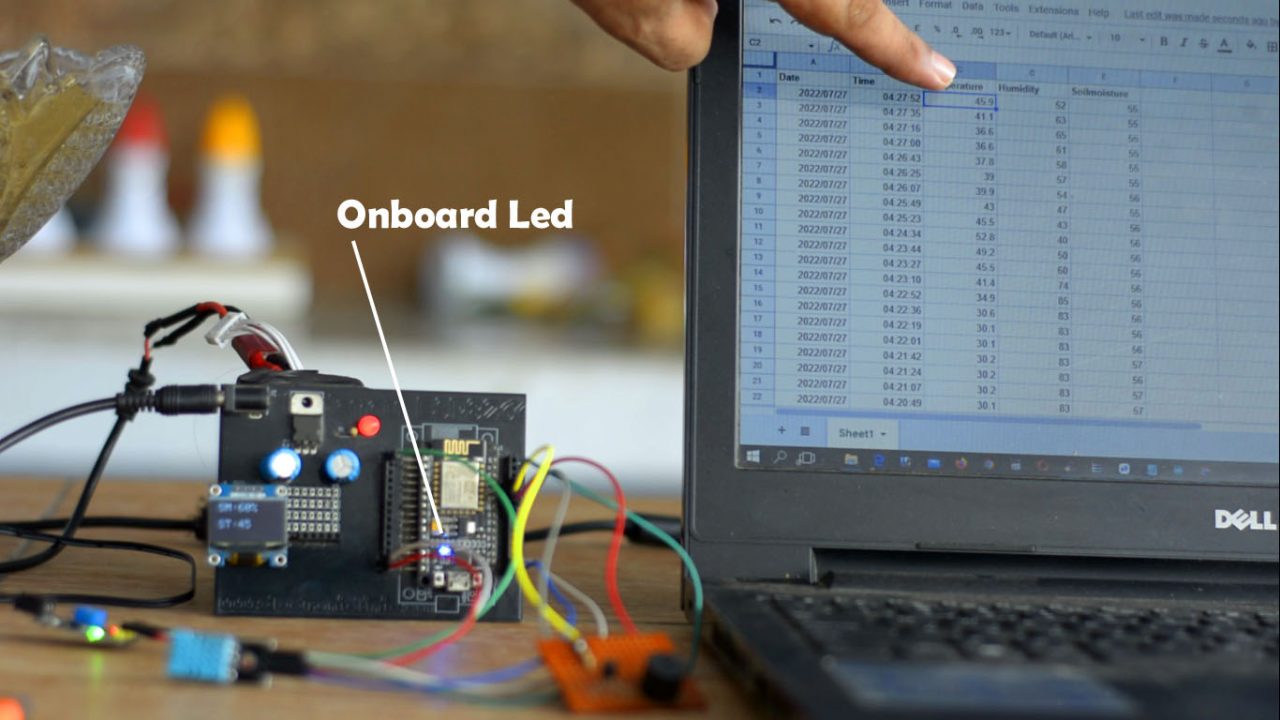 You can see the temperature values has increased and also the Onboard Led has turned ON. I am sure by now, you might have got an idea of how does this system work. So, without any further delay let’s get started!!!

This soil moisture sensor provides data in both digital and analog form. The two probes on the sensor act as variable resistors. Use it in a home automated watering system or just use it to find out when your plant needs water. 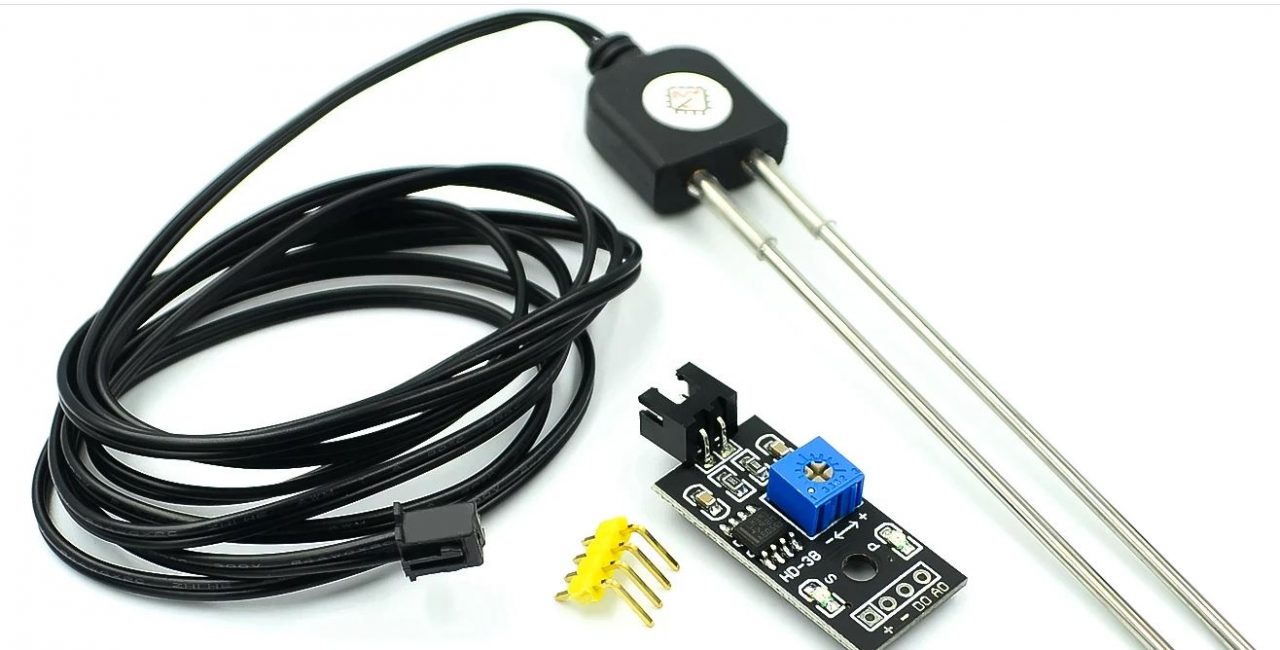 The soil moisture sensor consists of two probes which are used to measure the volumetric content of water. The two probes allow the current to pass through the soil and then it gets the resistance value to measure the moisture value.

The DHT11 is a basic, ultra low-cost digital temperature and humidity sensor. It uses a capacitive humidity sensor and a thermistor to measure the surrounding air, and spits out a digital signal on the data pin. It is simple to use, but requires careful timing to grab data. 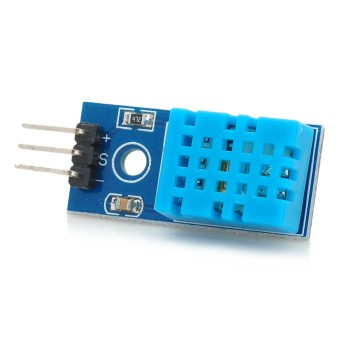 ESP8266 is a highly integrated chip designed for the needs of a new connected world. It offers a complete and self-contained Wi-Fi networking solution, allowing it to either host the application or to offload all Wi-Fi networking functions from another application processor.
ESP8266 has powerful on-board processing and storage capabilities that allow it to be integrated with the sensors and other application specific devices through its GPIOs with minimal development up-front and minimal loading during runtime. Its high degree of on-chip integration allows for minimal external circuitry, and the entire solution, including front-end module, is designed to occupy minimal PCB area. 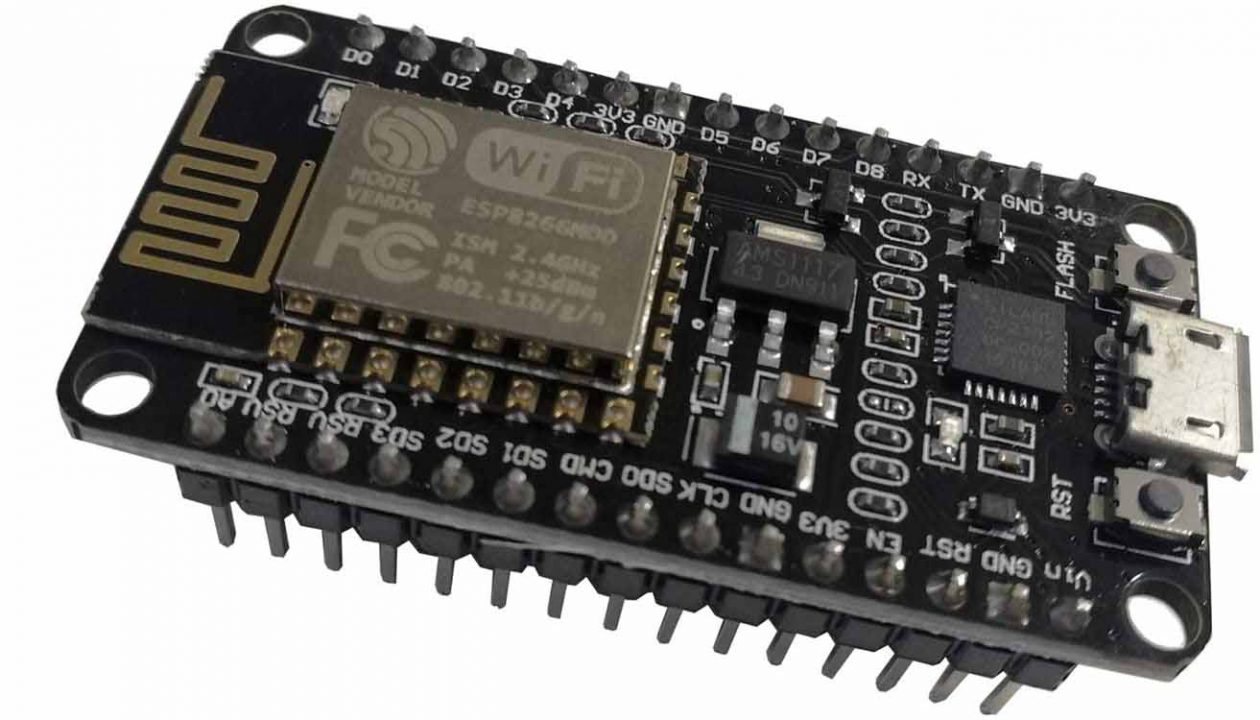 Read my getting started article on ESP8266 Nodemcu. 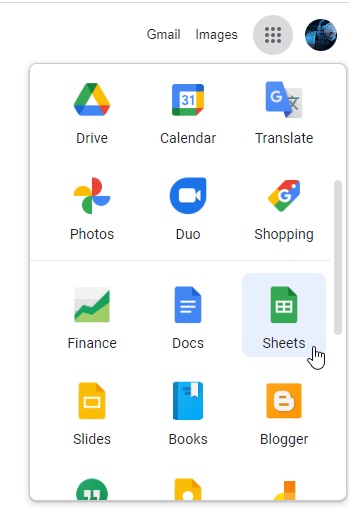 After that we will click on the blank in order to create a new spreadsheet.

After that give name to Google sheet which is temperature and soil moisture monitoring.

After opening the Apps Script, delete the function and copy the following code.

var sheet = SS.getSheetByName(parsedData.sheet_name); // sheet name to publish data to is specified in Arduino code
var dataArr = parsedData.values.split(“,”); // creates an array of the values to publish

sheet.appendRow(publish_array); // publish data in publish_array after the last row of data in the sheet

else {
return ContentService.createTextOutput(“Error! Request body empty or in incorrect format.”);
}
}

After that copy the script id from the Google sheet 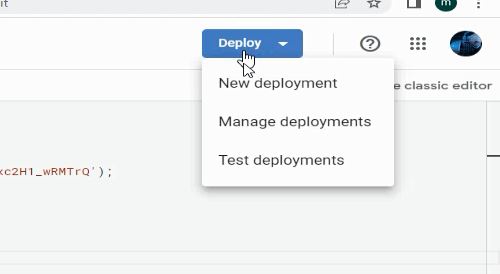 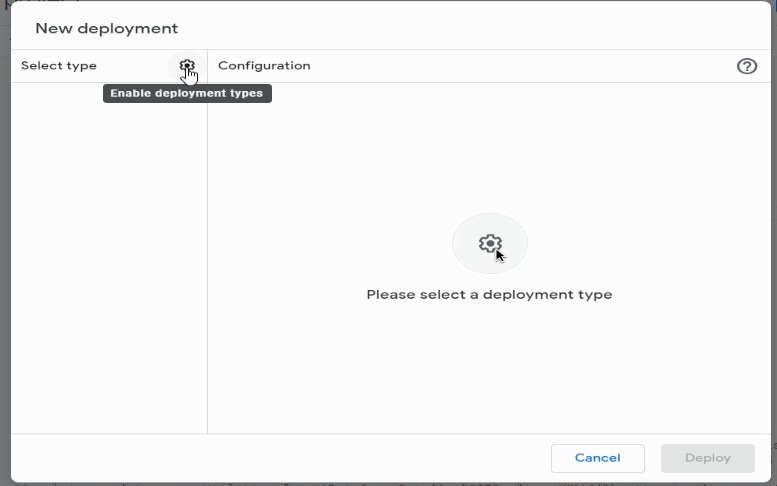 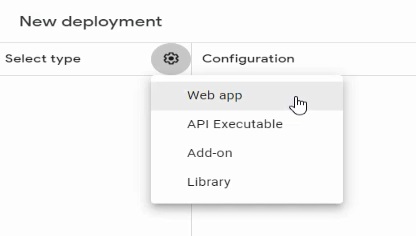 Now select anyone and click on the Deploy button. 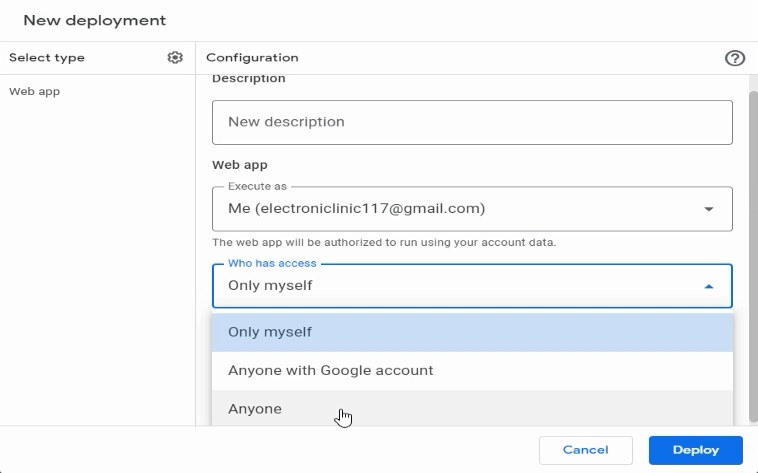 Now select the Gmail account in which you have created the Google sheet. 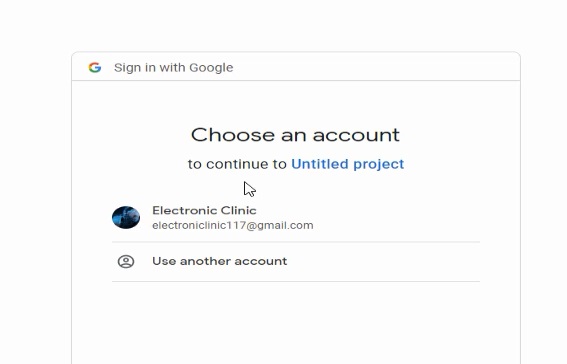 Now click on the Go to Untitled project (unsafe). 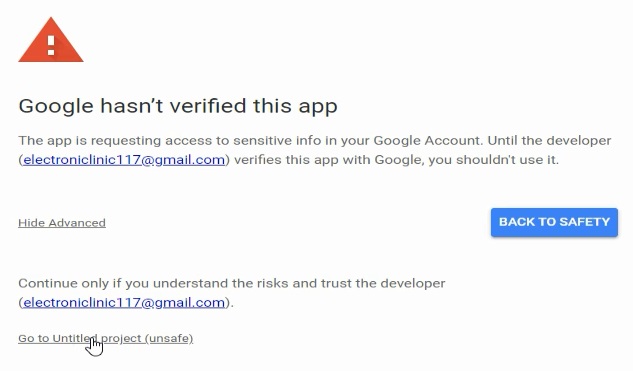 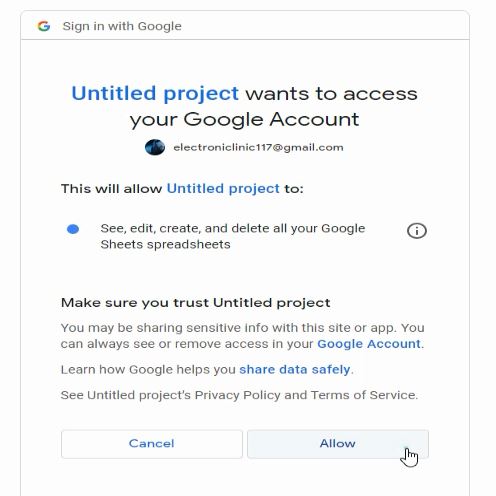 Then copy the deployment id which will be used in the code. 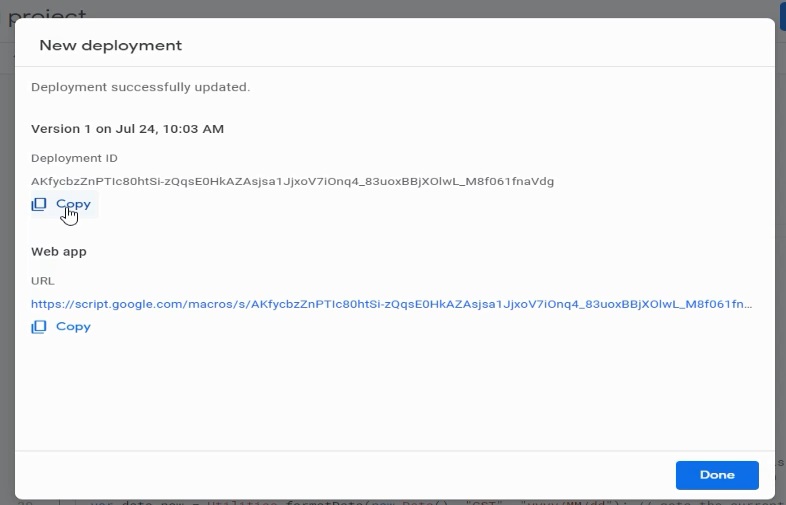 Now, to send data from Google Spreadsheet to ESP8266 add another Google Sheet in the same way as we did previously. Give a name to the Spreadsheet, set the column names as Soilmoisture and Temperature. Values stored in A2 and B2 cells are going to be send to ESP8266. So, in the programming we only access these two cells A2 and B2.

Click on the extensions and select Apps Scripts. All the other steps are exactly the same, the only difference, this time we will use a different script code as given below. If you face any issues, watch the video tutorial given at the end of this article.

Now, copy the deployment ID, paste it next to the GScriptedId in the ESP8266 programming. This is used for receiving data from Google Script address. Now the Google sheet is ready for sending the data to the ESP8266.

Note: if you face any issues, watch video tutorial given at the end of this article.

Before, you start the programming, first of all, make sure you download all the necessary libraries.

The Adafruit_GFX.h and Adafruit_SSD1306.h libraries I have been using for quite a long time and I have already explained how to download and use these libraries.

You will also need to install the DHT11 library for this click on the Sketch Menu then go to the Include Library and then click on the Manage Libraries. Type dht in the search box and then install the dht sensor library.

For this project, you will also need these three files DebugMacros.h, HTTPRedirect.cpp, and HTTPRedirect.h. These files are need to be placed with the main programming file in the same folder.