A Silicon controlled rectifier (SCR) is a four layer PNPN device having three terminal anode (A), cathode (K) and gate (G).It is solid state current controlling device. SCR is used as a switching device in high power applications and also used as a controlled rectifier to convert ac into dc. it is advanced version of Shockley diode with an extra terminal added, this terminal is known as gate which is used to trigger the component into conduction  using small potential.

It has three modes and three junctions. 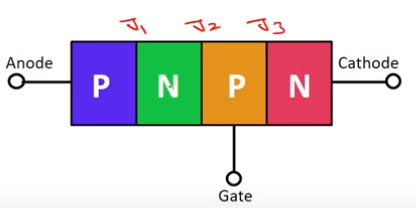 Before understanding the modes first let’s have a look at what biasing means.

In this mode Anode is connected to positive, cathode is connected to negative and gate is at zero potential. When these terminals are connected to the source then the junction 1, 3 develop as forward biased junction and junction 2 develop as reversed biased junction. As the j2 is in reverse bias. And we know that in reverse bias the current does not flow easily so the breakdown will occurs when potential is supplied through it. Here the current value increase but voltage decreases. The region where the conduction of electron starts is called holding current. Here the voltage drops because the current is increasing and resistance is low.

In this mode Anode is connected to negative, cathode is connected to positive and gate is at zero potential. When these terminals are connected to the source then the junction 1, 3 develops as Reversed biased junction and junction 2 develop as forward biased. As the j1 and j3 are  in reverse so  the current does not flow only small amount of leakage current will flow through  when higher potential is supplied the breakdown will occures which will break the junction3.The current value increase suddenly but voltage decrease.

SCR is a fast switch and it is difficult to cycle a mechanical switch several hundred times a minute.  Several SCRs can be switched 25000 times a second which takes just microseconds to turn on or off these units. Changing the time that a switch is on as related to the time that it is off regulates the amount of power flowing through the switch. Therefore most devices can operate on pulses of power ac is a special form of alternating positive and negative pulse. The SCR can be used readily in control applications like

The V-I characteristics in forward blocking mode start when we supply a potential to the anode and cathode of the scr. The small current start to flow at first through reversed biased junction2 (j2). Increasing potential will breakdown the junction which will start holding current where the voltage will decrease due to small resistance and suddenly the current will increase rapidly.

Similarly in V-I characteristics of Reverse conduction mode the small leakage current flows and after breakdown of j3 will suddenly increase the current and lower the voltage. 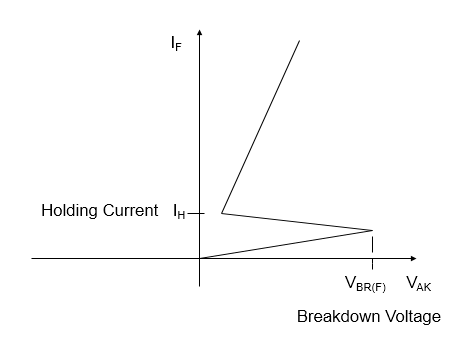 During testing an SCR for a moment connection b/w the gate and the anode is sufficient in polarity intensity and the duration to trigger it. The SCRs may be fired by an intentional triggering of the gate terminal excessive voltage breakdown b/w anode and cathode or an excessive rate of voltage rise b/w the anode and cathode. This Silicon controlled rectifier  maybe turned off by anode current falling under  the holding current value low current dropout  using reverse firing the gate providing a negative voltage to the gate. The Reverse firing is only sometimes effective and always involves high gate current.

The variant of SCR known as a Gate Turn off Thyristor (GTO). This is specifically designed to be turned off by means of reverse triggering. Even this reverse triggering requires fairly high current naturally 20% of the anode current. The SCR terminals may be identified by a continuity meter the only two terminals showing any continuity b/w them at all should be the gate and cathode. The Gate and cathode terminals connect to a PN junction inside the SCR. hence a continuity meter should obtain a diode like reading b/w the 2 terminals with the positive lead on the gate and the negative lead on the cathode. Several large SCRs have an internal resistor connected between gate and cathode which will affect any continuity readings taken by a meter.

The SCRs are rectifiers they only allow current through them in one direction which means they cannot be used alone for full wave AC power control.  Diodes in a rectifier circuit are replaced by SCRs for the makings of a controlled rectifier circuit while in DC power to a load may be time proportioned by triggering the SCRs at various points along the AC power waveform.

This is the maximum reverse voltage cathode positive with respect to anode applied to an SCR without conducting in the reverse direction. The Peak reverse voltage (PRV) is an important consideration while connecting an SCR in an Ac circuit. Throughout the negative half of ac supply reverse voltage is applied across SCR. As PRV is exceeded there may be fall breakdown and this SCR will be damaged as the external circuit does not limit the current. The available SCRs have PRV ratings up to 2.5 kV

This is the maximum anode current that an SCR is capable of passing without destruction. Each SCR has a safe value of forward current which it can conduct. When the value of current exceeds this value the SCR may be destroyed due to intensive heating at the junctions. E.g.  When an SCR has a forward current rating of 40A this means that the SCR can safely carry only 40 A. The effort to exceed this value will result in the destruction of the SCR. The available SCRs have forward current ratings from about 30A to 100A.

When SCRs gate is disconnected it act similarly as a Shockley diode which may be latched by break over voltage or from exceeding the critical rate of voltage rise between anode and the cathode just as with the Shockley diode. The Dropout is accomplished by reducing current until one or both internal transistors fall into cutoff mode similar to the Shockley diode. Though because the gate terminal connects directly to the base of the lower transistor it may be used as an alternative means to latch the SCR. By providing a small voltage b/w gate and the cathode the lower transistor will be forced on by the resulting base current which will cause the upper transistor to conduct which then supplies the lower transistor base with current that it no longer required to be activated by a gate voltage. This essential gate current to initiate latch-up, of course will be much lower than the current through the SCR from cathode to anode and SCR does achieve a measure of amplification.

The method of securing SCR conduction is known as triggering or firing and the most common way that SCRs are latched in actual practice. The SCRs are usually chosen so that their break over voltage is far beyond the greatest voltage expected to be experienced from the power source to make it possible to turn on only by a planned voltage pulse applied to the gate.

The Silicon controlled rectifiers SCR can also be turned off by directly shorting their gate and their   cathode terminals through reverse triggering or by the gate with a negative voltage in reference to the cathode so the lower transistor is forced into cutoff.  Sometimes it is possible because it involves shunting all of the upper transistor collector current past the lower transistor base. The current may be large making triggered shut off of an SCR difficult at finest. A change of the SCR called a Gate Turn off Thyristor makes this task easier. But as with this gate current required to turn it off may be as much as 20% of the anode load current.

The SCR missing this internal resistor are sometimes mentioned to as sensitive gate SCRs due to their ability to be triggered by the slightest positive gate signal.

By the test circuit for an SCR is both applied as an analytical tool for checking supposed SCRs and also an excellent aid to understanding basic SCR operation. The DC voltage source is used for powering the circuit and the two push button switches are used to latch and unlatch the SCR respectively.

TO operate the SCR in normal operation the following points are in view.

The gate current is increased above the required value SCR will close at much reduced supply voltage.

SCR Application as a Switch

The SCR has only two states namely ON state and OFF state and no state in between. When appropriate gate current is passed. The SCR starts conducting heavily and remains in this position indefinitely even if gate voltage is removed. It corresponds to the ON condition. When the anode current is reduced to the holding current   SCR is turned OFF.As behavior of SCR is similar to a mechanical switch. The SCR is an electronic device it is more appropriate to call it an electronic switch.

SCR Advantages as a switch

The SCR has the following advantages over a mechanical or electromechanical switch relay.

Some advantages of silicon controlled rectifier (SCR) are given below.

Some disadvantages of silicon controlled rectifier (SCR) are given below.

As voltage across the capacitor reaches the trigger point voltage of the device. The SCR turns ON current flows in the Load for the rest of the half cycle. The current flow stops when the applied voltage goes negative. 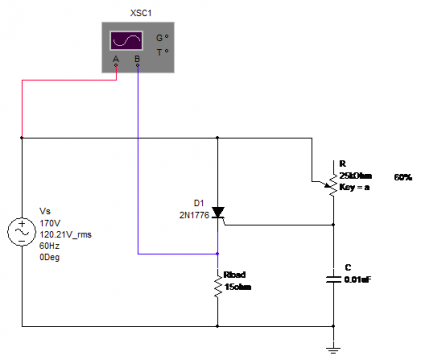 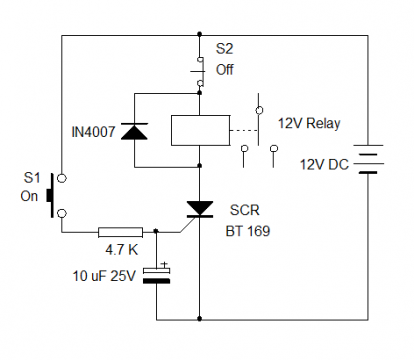 As the switch S1 is pressed for a moment Relay will turn on and it can be turned off by pressing S2. AS the switch S1 is replaced with an LDR and resistor R1 with 4.7K. This relay will turn on when light falls on LDR. Preset adjust the triggering point and this switch S1 is replaced with a 4.7 K NTC (Negative Temperature Coefficient) Thermistor and R1 with a 1K preset  the relay turns on when the temperature increases. Preset adjust the triggering point.