UART (Universal Asynchronous Receiver / Transmitter) is used, among other things, for communication with RS232 or RS485 interfaces. Often the UART is used for data transmission use with microcontrollers or the PC. The Raspberry Pi performs the UART (Universal Asynchronous Receiver / Transmitter) interface at pins 8 and 10 (TxD and RxD) from the GPIO connector strip out.

In this article I will also explain how to use the UART (Universal Asynchronous Receiver / Transmitter) interface based on the communication between two Raspberry Pi boards. So it is possible to communicate between the two mini computers.

The UART interface must first be activated after a standard installation of Raspbian and be freed from unnecessary ballast.

Property that the Raspberry Pi booting by default via the UART (Universal Asynchronous Receiver / Transmitter) interface issues. This means that when booting up, a lot of information which are usually not required. Follow these steps for a major cleaning:

The new line now looks e.g. as follows (all information is in one line!):

Now open the / etc / inittab file in an editor. Check for the last Line of the file is commented out with a # symbol:

If this is not the case, put a # sign in front of this line. Save and then close the file. If the line has already been commented out, must Don’t make any further changes. The UART interface can now used and no longer outputs data during the boot process.

Also, keep this in mind when communicating with other microcontrollers or PCs want. 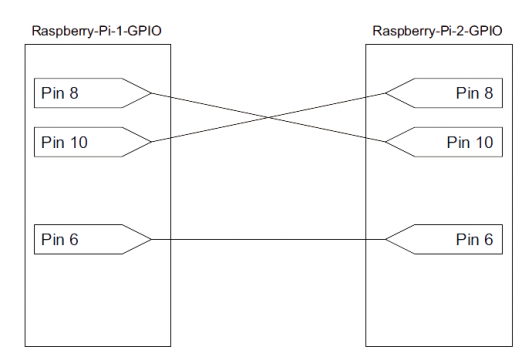 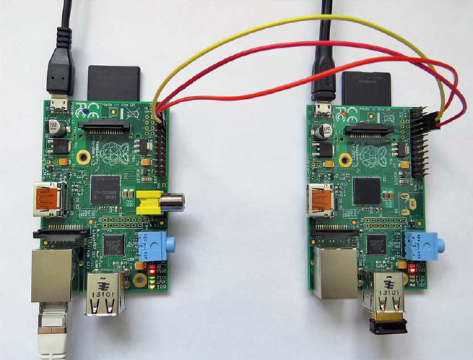 So that you can integrate UART communication into your Python programs, Let’s now turn to the integration of UART (Universal Asynchronous Receiver / Transmitter) in Python. We continue to use as an example the two connected Raspberry Pi boards. Helps with programming us the python library pyserial. To install this library you will need They in turn use the python setuptools:

The library can now be loaded into any Python program using import serial will. To communicate between the two Raspberry Pi, create two Python programs:

Fill in the sender.py file with the following lines of code:

This simple program opens the UART (Universal Asynchronous Receiver / Transmitter) interface and sets a baud rate of 9600. The ser.write () function now sends the text Hello World, followed by a newline string. This string shows the second Raspberry Pi, that the end of the message has been reached. ser.close () gives way to the UART interface free to send again. listener.py on the other device has the following content:

pySerial offers quite a few more functions that are not available in the previous Programs were used. We want some important functions Explain to you:

In addition to audio transmission through the jack socket or via HDMI, the Raspberry Pi also has the ability to send digital audio signals over I2S. The necessary You can find pins for this on the J8 header:

I2S stands for Integrated Interchip Sound and is used to transmit audio data between ICs. You could still find these four pins in the first Raspberry Pi models on the P5 header. Since the B + model, the pins are in the 40-pin GPIO strip J8 has been integrated and is now much more convenient to reach. To convert the audio signals present there into real sound, you need special D / A converter. A dedicated HiFi community has developed here, the ensures crystal-clear audio quality with its diverse audio boards. Via the jack connection this sound quality could not be achieved. To the results of the HiFi community include the following components and projects:

To activate the I2C interface, add it to the device tree. to open To do this, open the /boot/config.txt file and insert the line dtparam = i2s = on there. Some audio boards, such as E.g. the popular HiFiBerry, require additional device tree Overlays. For the HiFiBerry DAC this is e.g. the line dtoverlay = hifiberry-dac, the must be added to the /boot/config.txt file.

For audio-loving users, there was even a dedicated operating system called Volume developed. This supports I2S without any further measures.

The 1-wire bus is a single-wire bus originally developed by the Dallas company has been. The name of the bus comes from the fact that only one data line (DQ) is required, to send and receive data. The data line also supplies the sensor its supply voltage. Here it is necessary to connect the data line via a small pull-up resistor (4.7 k) to be connected to the 3.3 V line. This resistance keeps the data line stable at the 3.3 V level and can be used by the 1-Wire sensor during communication be pulled to ground. A real one-wire connection is in spite of that Name not possible. The ground connection must also always be to the 1-wire Sensor are guided. The 1-Wire bus can theoretically have any number of components to process. So you can easily connect several temperature sensors in parallel, to read values ​​from each individual sensor.

In order to make the 1-Wire-Bus accessible, you need a line here as well in /boot/config.txt to provide the device tree with the necessary information. Open the file with nano /boot/config.txt and add the following line to the End of file:

For the gpiopin parameter, use the BCM designation of the pin that you are using Want to use your 1-Wire component. It may be that the sensor you are using requires an external pull-up enable pin. If this is the case, insert the following line instead: dtoverlay = w1-gpio-pullup, gpiopin = X, extpullup = Y The value for the parameter gpiopin must now be used again for the GPIO pin used be adjusted. The Y is the placeholder for the BCM designation of the pull-up Enable pins you want to use. After a GPIO pin the pull-up Enable function has been assigned, it can usually not be used for other purposes be used. The last specialty are 1-wire components that go directly over the data line be supplied with electricity. This possibility can also be mapped in the device tree

will. In this case, add a comma and the pullup = on parameter at the end Your line. For the complete commissioning of a 1-wire temperature sensor including connection diagram and loading the modules.