USB stands for universal serial bus the USB is the standard that is used to connect peripherals to a computer it is by far the most commonly used port. In USB we have asynchronous serial communication. It replaced the PS2, parallel and serial port in the computer. The USB port is used to connect many different kinds of devices such as keyboard, mouse, camera, scanners, printer, flash drives and external hard drives. Even it can do networking and so much more. It is also used to charge device such as mobile phones, desktops and laptops will have several different USB ports. Now the goal of the development of the USB is to make connecting device to a computer much easier and this is done by making one standard connector.

By reading this article we can easily recognize type, version of the USB connector. The USB port is also hot swappable so devices can be connected or disconnected without turning off the computer. The USB is also self-configures itself which eliminates the needs for any extensive configuration or no configuration at all and in addition to connecting to a computer certain smaller devices can be powered by the USB port without the need for additional power cables. USB is royalty free means because every company can use it freely because other interfaces in digital devices are design by some community or companies like thunderbolt. Thunder bolt is design by the Intel which is their own property so if a company want to use thunderbolt physically in their device. They will pay cost to the Intel.

Now in addition to the different speed of the USB there are also different types of USB cables. The USB cables have two different connectors on each end of a cable. They will have either  have type A, type B or type C with the type A connector on one end and B and C on the other end. 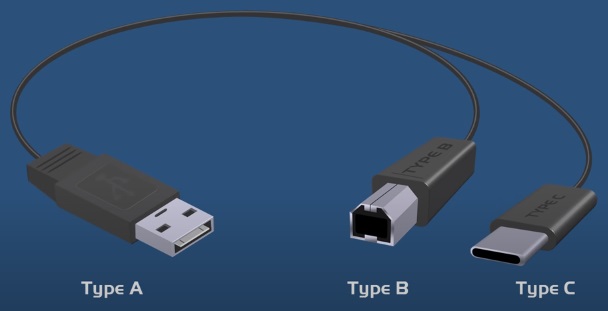 Now the type A connector is the host connector. This is a standard rectangular plug that we would plug in to the computer and computer will have several type A USB ports. Even though this is the oldest connector type it is still being used today. Now at the other end of the USB cable we might find different types of connectors such as type B connector.

USB type A and type B are oldest form factors and they have been in use since 1996 despite that USB type A is still commonly used today and we likely have several of these connectors on our computer with a few modern exception. These implementation features four pins that have had their potential speed upgraded over time beginning at the kilobits per second and now can reaches as high as 625 megabits per second. The backward and forward compatibility is only in type A. Their main disadvantage is their relatively large size as compared to future USB. 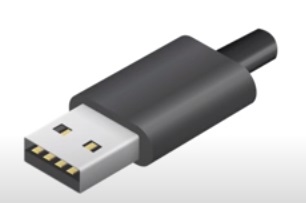 The type B connector is square design with bevelled corners on the top now this is also an older connector but it is still being used today. This type of connector what we would plug in to printers today, but it is also used in other devices such as external hard drives, USB microphones and so on. There is difference in type B 2.0 and USB 3.0 type B which are not compatible with each other. Because there are some extra pins on the top in USB 3.0 type B. 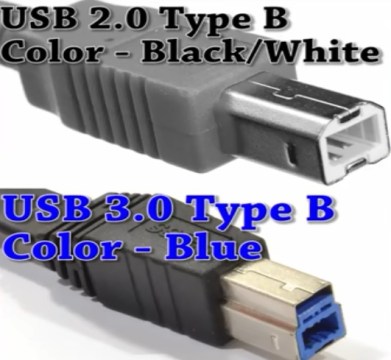 Another version of the type B connector is the mini B and just like its name says it is smaller than a type B connector. The mini B is used in smaller devices such as older smart phones and digital cameras. But it is being phased out in favour of even smaller connectors. It is introduced in 2001 these connectors were smaller and were easy to insert correctly.

Thee micro B is approximately the same width as the mini B but it’s about half thickness which enables it to plug in to even smaller and thinner devices and is made to connect to modern smart phones, modern digital cameras, MP3 players and so on. The micro B came out in 2007 and its intent was to replace the mini B. It has camphor to indicate which orientation it should be inserted. 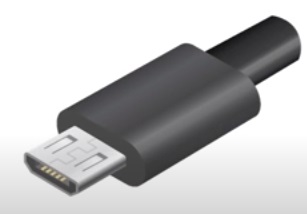 The USB 2.0 micro B is also not compatible with USB 3.0 micro B There is also the USB 3.0 type B connector. The type B 3.0 has nine pins compared to four pins in the previous versions and this allows for higher transfer speed and to supply power to the peripheral. Now to make room for the pins the type B 3.0 is larger and has a different shape than the 1 and 2.0 versions. So the type B 3.0 connector will not fit in to devices that are made for USB 1 and USB 2.0 because of its larger size.

There is also the USB 3.0 micro B and this connector is just as thin as the 2.0 versions but it is wider. It is basically a USB 2.0 micro B connector but with five additional pins that are stacked on the side of the connector which doubles the width of a 2.0 micro B. This connector is used to carry data and supply power to devices such as external hard drives.

If you are an apple user you have likely encountered the lightning cable. The apple proprietary connector used in their modern iOS devices and accessories since 2012. Lightning cable use 8 pins and is much smaller than apple 30 pin dock connector that it replaced conveniently lightning was designed to be inserted in either orientation while earlier versions of USB connectors were notorious for only being insert able in one orientation.

In 2014 USB C was developed and it was developed with the USB 3.1 standard. Now this is thin connector with rounded edges and it has 24 pins and it easily plugs in to a port because it does not have up and down orientation. Today the USB C can be found on modern smart phones, external hard drives, tablets, modern desktop and laptop computers. In fact it is even used to charge devices such as modern laptops. A standard type C cable will have the same connector on each end because the type C can be connected to a host meaning a computer at one end and connected to another device on the other end. So this makes the a type C cable convenient because we do not to have figure out which end goes where because it does not matter both end are same. But even though that it is the typical USB type C cable we will still find the USB cable type A at one end and type C on other end. Like lightning cable it can also be inserted in either orientation. It can deliver much faster speed set up to 2.5 gigabits per second and much higher power output capable of quickly charging high duty devices. Type C can be used for more than just power and data transfer as well and we may see one day it will replace established audio video cables such as HDMI and display port cable. It may also function as an eventual alternative to Ethernet cables.

USB port colour on mother board:

There are various types of the mother board manufacturing companies. Some company design the usb ports for the attraction but there is also some technical reason behind it:

USB 2.0 is usually black or white in colour in mother board. In some mother board it is red in colour this is because maximum power is supplied to it. The normal power of USB 2.0 is:

While in the Red or yellow USB 2.0 the power is:

The speed will be similar but the current rating will be different and this is design because the external sound card requires more power than the standard USB 2.0 so in this case we will use this type of port.

The colour of USB 3.0 is usually blue in colour and the power rating is:

Normally in USB connector cable we have four wires:

Colours can vary little bit like red to pink.

Difference between thunderbolt and USB: