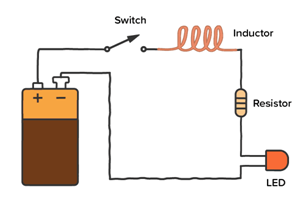 An inductor is passive component which consist of two terminals it is also called a coil, chokes, or reactor, when electric current flow through it, it store energy in form of magnetic field. Magnetic field will be generated when current flows in the coil. Inductors are mostly used for the opposition of current.

Electromotive force is produced in inductor when the current changes in the inductor that described by Faraday’s law of induction that whenever the flux is changing in the circuit it will induced voltage in the circuit. According to Lenz’s law the induced EMF will opposes the change in current that created it.

The inductance of inductor can is given by the equation: 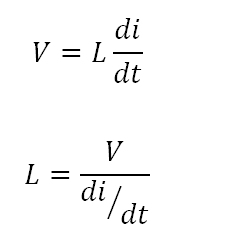 From the above equation we can see that the inductance is the ratio between voltage and changing current.

The unit of inductance is henry (H) due to American Scientist Joseph Henry.

An inductor is a coil that is insulated copper wire, wrapped around a core of ferromagnetic material.

Many inductors are made up of iron core in which ferrite are present inside the core.

The tuning circuits can select the desired frequency with the help of an inductor. Various electronic devices use inductors along with the capacitor to modify the frequency.

Inductors can store energy for a small interval of time because when the power supply is detached the magnetic field will be gone. Computers circuits use inductors where power supplies can be switched.

Inductors separate different frequencies work as an electronic filter. It makes tuned circuits when combined with capacitors used in TV and Radio receivers.

Inductors are mostly used in signal processing and analog circuits. In power supply with a filter capacitor, it removes ripples.

The switch-mode power supply uses Inductors to store energy and to produce DC current. Energy is supplied to the circuit by inductor during its off switching periods to keep the current flow. 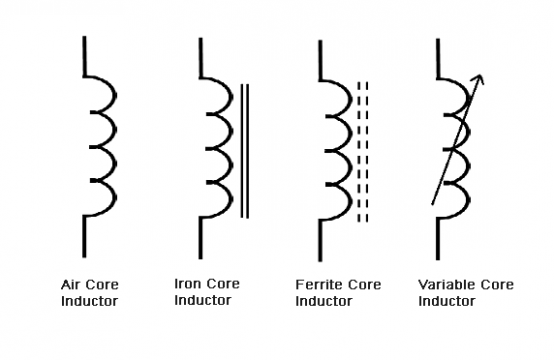 This type of inductor achieved specified inductance without use of ferromagnetic.

Due to which frequency is increased and we obtain better Q-factor, greater power handling and less distortion.

Air cored inductors are designed for higher frequencies such as 1 GHz. Most ferromagnetic cores lossy above 100 MHz 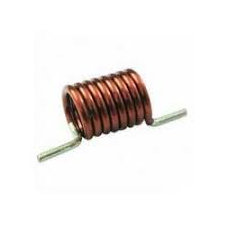 Iron cores are normally used when high inductance and high power is required. Iron laminate are used for some audio coils or chokes. 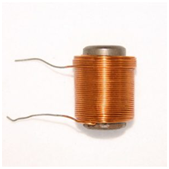 Ferrite is one of the mostly used cores for a various types of inductor. Ferrite is a metal oxide ceramic they are also known as ferromagnetic materials  based around a mixture of Ferric Oxide Fe2O3 and either manganese-zinc or nickel-zinc oxides which are extruded or pressed into the required shape. 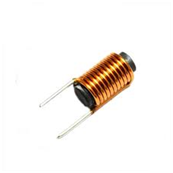 Hard ferrites are made up of iron, strontium oxide or barium. They are also called permanent magnets. They hold the polarity of their magnetization when the magnetizing field has been removed, i.e. they have a high remanance level they are mostly used as household magnets.

Iron oxide is another type of inductor which is widely used. it has high permeability which enables it to provide higher inductance. 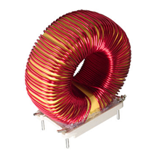 This type of inductor is on a cylindrical bobbin. They may be used for mounting printed circuit board. Some older versions of these inductors may even be in a similar format to normal leaded resistors.

This is circular form inductor is wound on a toroid. Ferrite is often used as the former as this increases the permeability of the core.

In this type of inductor flux leakage is very low because magnetic flux travel in circular form.

The disadvantage is that it require special winding machine to perform the manufacture as the wire has to be passed thought the toroid for each turn required. 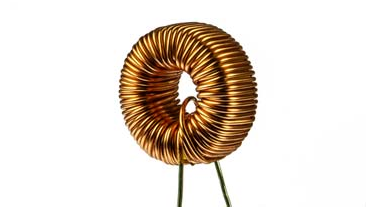 This type of inductor is mostly used for surface mount technology. Magnetic ceramic material or ferrite is used for its construction.

It is made up of ceramic in which coil is placed like chip capacitors external circuit is presented on its end caps. 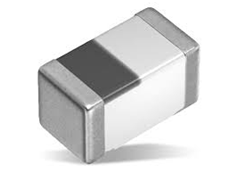 The inductor stores the electrical energy in the form of the magnetic field. It is constructed by wounding the wire on the core. The cores are made of iron, ceramic material or by the air. The core may be E- shaped or toroidal.

A Magnetic field is created around the inductor when DC signal passing through it. This magnetic field can be used for several functions. Automotive relay mostly used coil inside it.

Magnetic field is generated when the coil is energized by DC signal changes the state of the relay from an Open to a Closed state. Most electromagnetic relays work on this principal.

Inductor depends upon on the following factors:

4) Length – The inductance of a coil decreases as its length increases because there is inverse relation between length and inductance.

Difference between an Inductor and Capacitor

Now to understand we know that Capacitor tries to level the voltage in a circuit, capacitor charge or discharge to level up the voltage. When the potential difference is applied around the terminal of capacitor an electric field is formed and electric charges are stored.

The capacitor’s value can be determined, the distance between the two terminals, by the size of the terminals, and the kind of material used.

Inductor is work as short circuit for direct current and grants an opposing force to alternating current that depends on the current’s frequency. The opposition to a flow of the current of an inductor is associated with the frequency of the flowing current through it.

Inductors in Series and Parallel

We can connect inductor in series or parallel.

Suppose we  have three inductors  measuring 10uH,  20uH and the other 30uH, then by putting them in series you obtain a total inductance of 60uH. 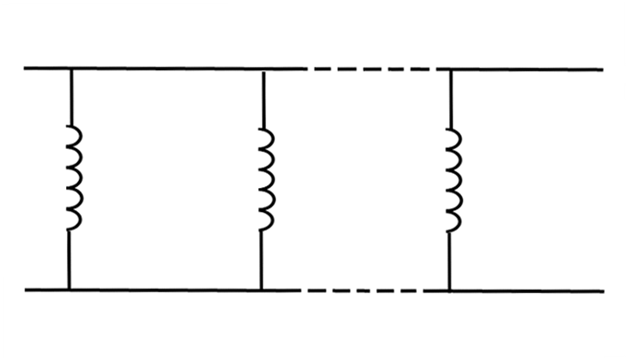 In this way if we have connect three inductors 10uH, 20uH and 3 0uH inductors in parallel then the inductance will be: 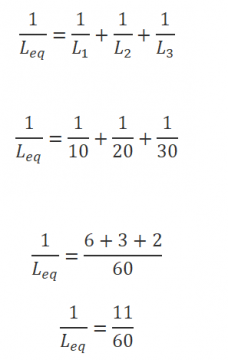 By cross multiplication we get

Dividing both sides by 11 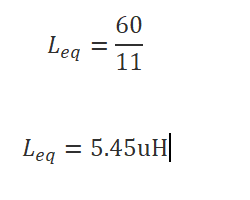 Inductors can store energy much like capacitors until the power is supply to it, but the energy is gone at the moment when we disconnect the power and the magnetic field collapses. In other words, an unpowered inductor cannot sustain its magnetic field without power supply 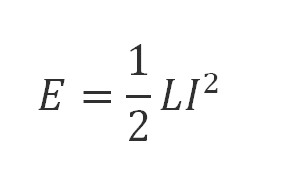 Where E represents energy in Joules, L is the inductance and I is the current in amperes.

This relation states that energy is directly proportional to the inductance and the current greater the value of the current and inductance greater will be the energy.

Now consider example if we have an inductor of 10uH with a 2A current flowing through it, then the energy stored will be: 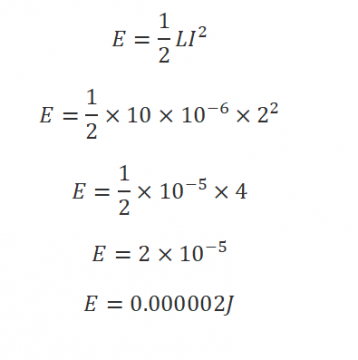 The voltage can be calculated by using the formula: 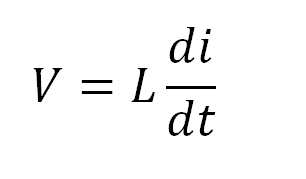 This equation states that the current rises in linear form when a constant voltage is applied across the inductor.

Inductors have impedance that is related to the frequency by the formula:

Where the inductive impedance, f is the frequency in Hertz and L is the inductance in Henrys.

Inductors are useless in DC circuits, since there is a constant current flowing in dc circuits and the inductor acts like a bit of wire. Inductors are mostly used in AC circuits they have an impedance, which makes them useful to limit current in an AC circuit, such as fluorescent lamp ballasts.

They can also be used to filter signals. 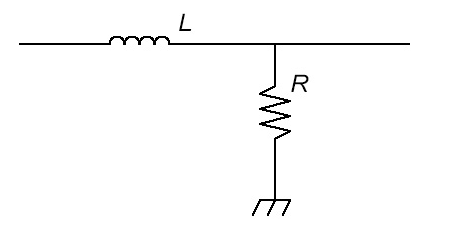 In the above circuit we have resistor connected with inductor which is also known as choke filter; the inductor allows all DC current to flow through it to ground behaving like wire, preventing all the low frequencies from reaching the output the inductor will offer high resistance to ac and no resistance to dc. At higher frequencies, the impedance of the inductor increases steadily, so the signal can pass through to the output, hence it is called a high pass filter.

Mathematical Expression can be calculated by using the following formulas:

Let the voltage across load resistor RL  be VL . Thus, the value of  VL is given by the below equation.

RL will cancel each other 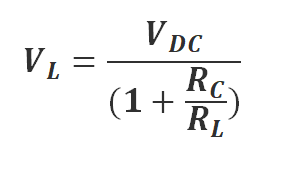 Where VDC the DC output voltage is output of full wave rectifier, and RC  is the resistance of inductor coil.

Inductor in a Circuit:

In the circuit below, we have a resistor and LED in series with an inductor. And switch to turn the power on and off.

Without the inductor, this would just be a normal LED circuit and the LED would turn on right away when we supply the power.  Changes in current will be resisted by the inductor. When the switch is off, there is no current flowing. When switch on, current starts flowing through the circuit. So instead of the current going from zero to maximum right away, it will gradually increase up to its maximum current. The resistor and LED will set the maximum current for the circuit.

The light intensity of the led will be decided by the current and will make the led fade in.

When the switch is closed the current will rises in exponential it will not rise immediately. This is due to the fact change in current flow through the inductor causes BACK EMF in the circuit. This back EMF has an amplitude that is proportional to the RATE OF CHANGE of current (the faster the rate of change, the greater the back EMF) and polarity which opposes the change in current in the inductor that caused it initially. The back EMF is produced when the current in the inductor is changing which will the change in the magnetic field, which will induce back emf. This process is called SELF INDUCTION.