WiringPi Library for Raspberry Pi GPIO Commands- The WiringPi project provides the GPIO commands. So you can use individual Read out and change GPIO pins in the terminal or in a bash script. Gpio can also control the popular Gertboard and the PiFace board. WiringPi is basically a C++ library for Raspberry Pi.  The programmers uses the hardware functions of the Raspberry Pi and various additional hardware to control, e.g. the DS1302 chip (Real Time Clock) or various LC displays, digital pins, SPI, UART, etc. WiringPi is a PIN based GPIO access Library which was developed using C language for the BCM2835, BCM2837 SoC, and BCM2836 devices used in all Raspberry Pi Versions.

WiringPi is not available as a Raspbian package. Instead, you need to Download source code from a Git repository and compile it yourself. None Fear: The process is straightforward and takes just a few minutes. The command GPIO is installed in the / usr / local / bin directory.

The version number of WiringPi and information about your Raspberry Pi model reveals the command gpio -v:

This section focuses on the core functions of the gpio command, i.e. on the control of the GPIO pins (see table 1). The mode command also knows the four main modes input, output, clock, and pwm (for Pulse Width Modulation) as well nor the states up, down and tri. This allows the internal pull-up or pull-down Resistors of some GPIO inputs can be controlled (e.g. applies to pins 3 and 5 of the P1 or J8 headers). You can read even more details and commands with man gpio.

Table 1: The most important gpio options and commands

gpio readall reveals the current status of all GPIO pins. The meaning of the columns is as follows:

If you refer to these pin numbers in gpio commands, you need to use the -1 option (one, not L). The following output was created on a Raspberry Pi 2: 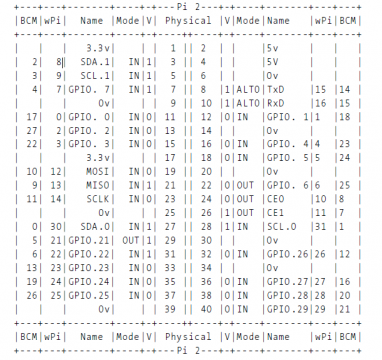