Decision-Making Statement if, if-else, nested-if, switch case-You know that computers can perform arithmetic calculations correctly and rapidly. Besides rapid arithmetic calculations and other capabilities, the computer is also capable of quick decision making and repetition. In this tutorial you will learn how to make decisions in c/c++ i.e you will learn how to code the program so that computer tests a condition and selects one of two alternative actions depending on whether the condition is true or false c/c++

As discussed earlier that statements are executed one after another in their natural sequence (i.e in gravitational flow). But the order of execution may be changed with a direct (unconditional) jump. In c++ this can be accomplished by means of the goto statement. The goto statement branches unconditionally to a specified labeled-statement. It has the following general form

The keyword goto is always followed by a label (a label to which control will be transferred); where label is a valid identifier-name and must be unique in a program i.e no two statements can have the same label in a program.

C/c++ knows a label because it ends with a colon. When computer executes the goto statement it branches to that statement labeled by associated label.

Let us examine the program shown below:

Avoid using the goto statement whenever possible because modern programming practice discourage its use. It is generally felt that goto statements make a program harder to read and debug. Therefore never ever use goto statement. The structured features of C language eliminate the need of goto by writing more structured programs using other branching statements (for, while and do/while)a well.

Decision-Making with if statement:

the fundamental decision-making statement in C/c++ is the if statement. it enables you to test for a condition to perform some action. Its simplest format is

for a single statement:

Here is a portion of a C/C++ program with an if statement which illustrates the use of this important statement. 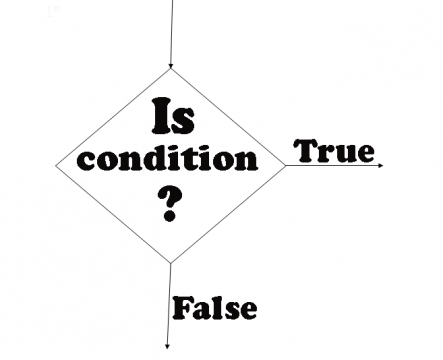 Example: how to write a program which start beep when the marks is poor:

Any type and any number of statements may appear before and after the else clause. As usual statements must be enclosed within braces for more than one statement. 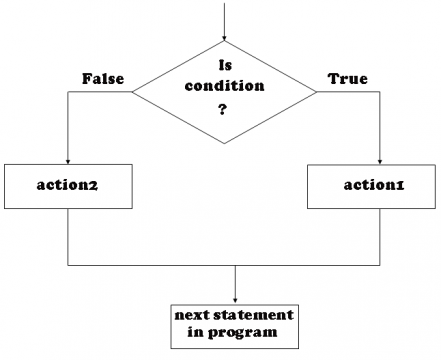 let us consider the if-else statement in the following:


Example: how to write a program in c++ which display even and odd number using decision-making statement if-else:

Example: write a program in c++ which display the basic pay of  the employee and calculate the net pay using decision-making statement if-else:

The roots are calculated as:

In the above program all the three if-conditions will be checked but if we use else-if from it will be executed only in that case if the conditions in all of the preceding if statements are false. Obviously it will lead to efficient programming.

Example: write a program in c++ which display subtraction division multiplication addition using decision-making statement if,  else if  and else :

In the above program, exit() function is used which (declared in the stdlib.h header file) enables you to exit the program.

The if structure can be nested within on another i.e when an if statement is contained within another we say these are nested or nest of conditional statements or a nested if.

The above example shows a simple type of nested decision making. Another example is give with different pattern of nested condition.

In the above example we need to know which else phrase goes with which if. The rule is very simple each else clause belongs to the nearest if for which there is no else clause i.e each else is paired with the previous if that does not already have an else as shown below: 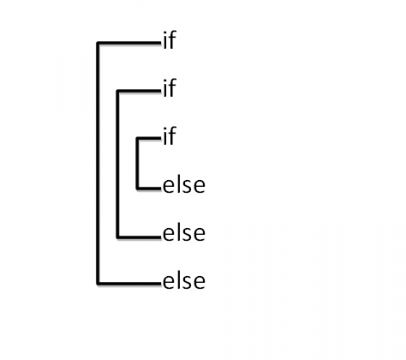 Apply this rule to the example just given and after proper indentation, we get the following pattern 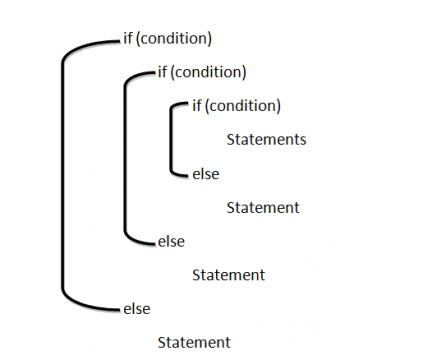 Indentation plays an important role in nested if statement because it shows which else belongs to which if statement. It is a visual aid for the programmer. It is no requirement for the compiler but rather a good programming practice to make programs more readable.


Example: write a program in c++ which display the largest number using decision-making statement  nested if  :

Nested condition can be very useful in writing program statements but sometimes nested if statements can become extremely long which causes difficulty in reading understanding debugging and modifying the program logic poor indentation may cause a lot of problem for the programmer. So therefore it is always suggested to prefer simple and straightforward logic instead of using long and complex nested decision-making conditions.

More than one condition can be combined and tested in an if statement by connecting them with logical operator &&(AND),  ||(OR),  and ! (NOT). Such condition expression are referred to as Boolean expression complex or compound expression.

The compound expression with (||) logical operation is true if any of the conditions is/are true and false only in the one case when all condition is false. For example:

These definitions are summarized in the following truth table which displays app possible values for two decision-making conditions X and Y and the corresponding values of the logical expression.

! (NOT) is called a prefix operator i.e it is always used in front of a condition but it is important to note that the condition must be enclosed in parentheses.

Operators and their Precedence:

The equivalent conditional expression is:

Conditional expression is actually a ternary (three operands) operation in which condition exp1 and exp2 are the three operands and ? and : act as the operators.

Example: write a program in c++ which display even and odd number using decision-making conditional operator or ternary  (? : )  :

We know that the goto statement is used to jump unconditionally to the indicated label. The if statement selects on of the two possible choices of action according to the value of a conditional expression. Whereas the multiple branching can be carried out in c/c++ by means of the switch statement.

Any legal c/c++ expression may be used in switch expression. It must be enclosed in parentheses and only used for equality test. Other relational operators or Boolean operators are not allowed. The expression value may be of type integer or character. The switch statement does not work with floating-point data types.

After evaluation of expression control is transferred directly to the statement whose case-value matches the result of the switch expression.

an integer or a character constant follows the reserved word ‘case’. Each value in each case must be different from all the others i.e the case values must be unique within a given switch statement.

If more than one statement are required to be executed in case body no need to enclose them within braces.