Definition of a Logic Gate

Logic gates are basic building blocks, on the basis of or with the help of which, digital systems are designed. Logic gates carry out hardware logic functions through the application of logical algebra or Boolean algebra (remember that Boolean algebra was introduced by George Boole in 1854, that’s the reason it is known as Boolean algebra) which helps computers a great deal in decision-making and perform required computing operations in a short period of time. In other words, the entire hardware logic function depends on logic algebra and the logic gates carry out the hardware logic function in a jiffy on the basis of this algebra. An extraordinary characteristic of Boolean algebra is that it has just two values of variables being used in it (either 0 or 1). Therefore, every variable is either zero or one (i.e. the value of each variable is either zero or it is 1). In other words, two binary digits are used in Boolean algebra in order to reflect the two levels having taken place on a digital circuit, out of which binary 1 represents high level whereas binary 0 denotes low level.

Nowadays, these gates are available in a variety of IC families (that’s these gates belong or are related to different IC families), the most popular or famous of which are the following families.

The digits 0 and 1 have paramount standing in computing systems, which represents two possible states of a device or circuit. If these two states are represented as ON and OFF, Closed and Open, High and Low, Plus and Minus, True and False or Up and Down, even then no difference occurs. However, it is a settled point that these two states are represented by two distinct words or two distinct digits. Thus, 1- symbol in a positive logic may reflect the following:

i). An ON circuit

On the contrary, the 0-symbol in positive logic represents the following:

i). An off circuit

Remember that a completely reversed condition takes place in case of negative logic.

Thus, positive and negative logic can be defined as follows:

If in any digital or computing system, off circuit or open switch or low voltage is represented by binary 0 and an on the circuit, closed switch or high voltage by binary 1, it is called positive logic.

On the contrary, if in any digital circuit or computing system, off circuit or open switch or low voltage is represented by binary 1 and on circuit or closed switch or high voltage by binary 0, it is called negative logic. This has been exemplified in figure 2.1 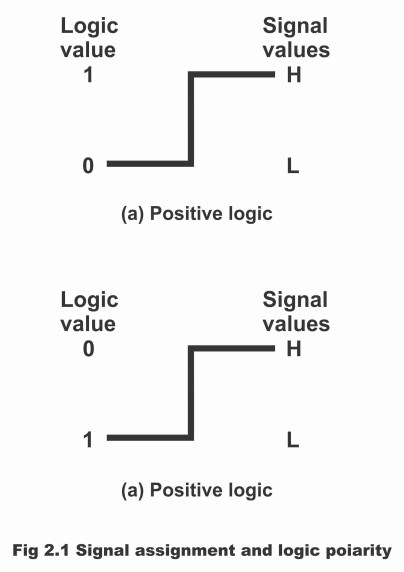 Suppose that a digital system consists on two voltages level 0V and 5V. If symbol 1 is reserved for 5V and symbol 0 is considered as 0V, in such a situation it becomes a positive logic system. On the contrary, if we set symbol-1 as 0V and symbol-0 as 5V, in such a situation we will have a negative logic system. This point can also be expounded with the help of a simple electrical circuit shown in figure 2.2. In this circuit, a lamp has been fitted between terminal A and B through a 5V battery and a switch S. terminal B has been earthed. When the switch opens, 0 volts are received on terminal A with respect to earth, thus lamp does not illuminate. However, when the switch closes, +5V are received on terminal A with respect to its earth and the lamp starts to irradiate. As such, two likely output states (i.e. oV or +5V) emerge with respect to earth or terminal B.

Now assume that the battery displayed in the diagram has been reversed. In such a situation, two possible output states (i.e. 0V and -5V) result. Again, we represent symbol-0 by 0V and symbol-1 by -5V. 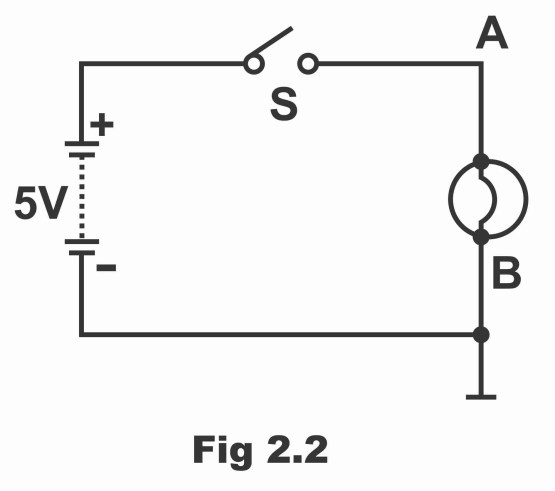 It should be kept in mind that whichever of the two voltage levels is more positive in positive logic, it denotes 1. Whereas in the situation of negative logic, the voltage level, which is more negative, denotes 1. Moreover, it is also not necessary that symbol – 0 be represented by 0V every time, rather symbol – 0 and symbol -1 can sometimes be presented by some other digits as well. For example, suppose that two voltage levels 2V and 10V exist in a circuit. In this case, symbol -1 reflects high voltage (10V) and symbol – 0 low voltage (2V). if the values of voltage levels are -2V and -8V, then in the case of positive logic, symbol – 1 reflects -2V whereas symbol – 0 -8V (i.e. the lowest of the two voltage values). It has to be remembered that negative logic seems somewhat unnatural, (though it has multiple applications), therefore here we primarily concentrate on positive logic for the sake of simplicity.