The AND gate is a digital circuit that consists on two or more than two inputs and just one output. As a result of any low input of this gate, low output is received. And when all inputs of this gate are high, a high output is received. That’s the reason AND gate is also known as “all or nothing” gate. i.e. any input is zero, output is zero. In figure 2.11, electronic or logic symbol of AND gate has been illustrated. In figure b, its equivalent switching circuit has been shown. On the left side of AND gate symbol, two inputs A and B and on the right side one output C can be seen. It must be remembered that value three variables A, B and C can either be zero or 1. Output of AND gate is 1 only both its inputs are at level 1. 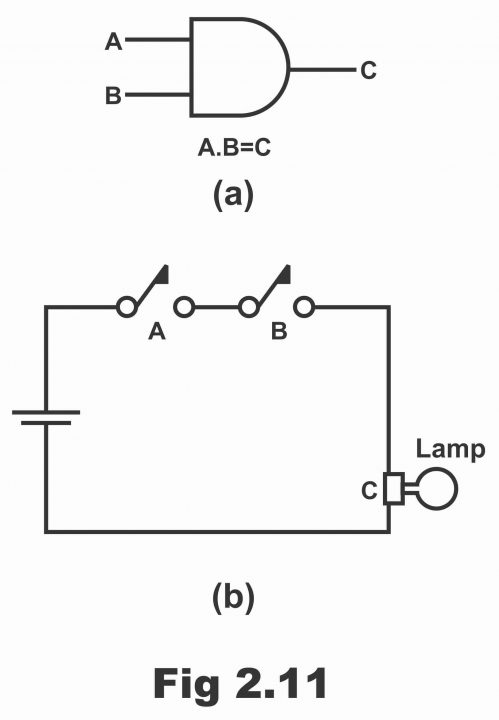 Logic Operation of the AND Gate: 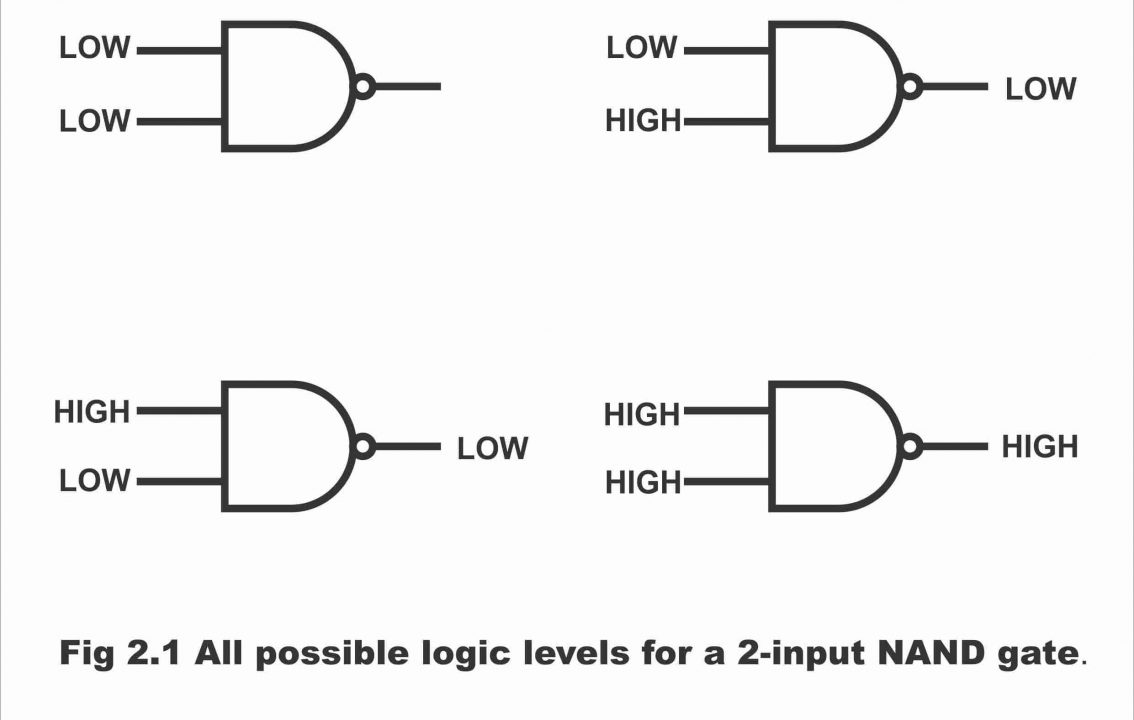 Boolean Expression of the AND Gate:

In the case of logic expression or Boolean algebraic form of AND gate, it can be written in the arithmetic form as follows:

If one of the inputs is variable A and other input variable B, whereas C is output variable, then in case of equivalent expression, it can be mentioned as follows (remember that variable on each input can either be 0 or 1).

These two points may also be explained with the help of an equivalent switching circuit as shown in figure 2.11 (b). that’s lamp radiates or becomes ON only when both the switches A and B are close. Otherwise, the lamp remains OFF in case any one of these two switches is open.

Truth tables are drawn through Boolean algebra as follows:

In figure 2.14, a diode AND gate circuit has been shown which consists on two inputs A and B. The logical operation of this AND gate made from two diodes, is as follows: 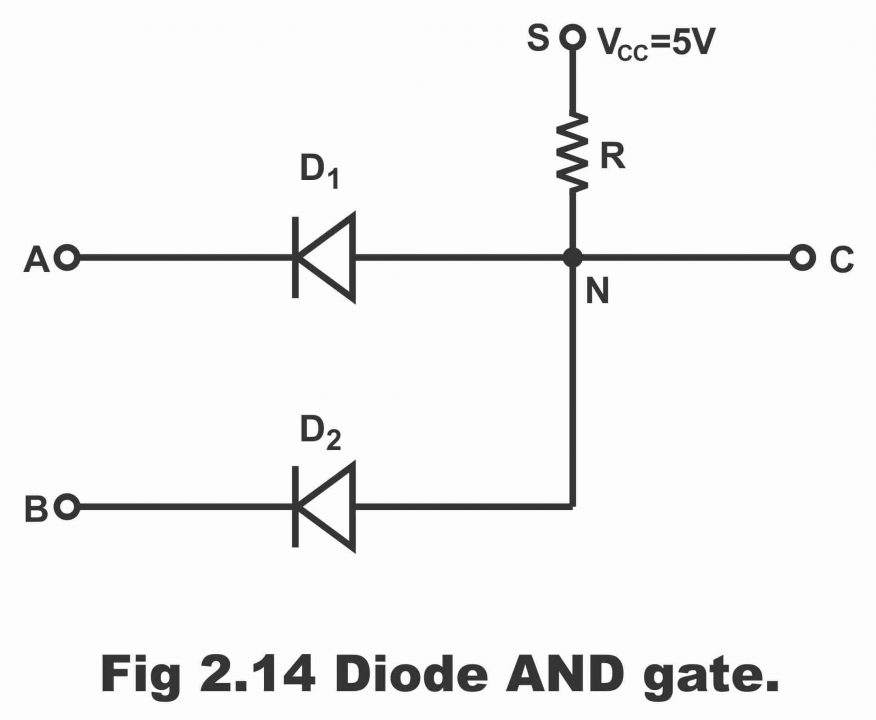 In figure 2.15, an AND gate comprising three inputs has been shown. When all inputs are low, all diodes conduct, owing to which a low output is obtained. Even if one of the inputs is low, the output will be on low state, because diode connected with low input does not conduct. There is just one way of getting a high output from this type of a gate and it is to bring all inputs on +5V. when all inputs are high, none of the diodes conduct, thus supply voltage +5V are received on output. In the figure 2.16, truth table of a three inputs AND gate has been shown. Remember that the number of rows in any truth table is always equal to 2n, here means number of inputs. For example, in case of two inputs, 4 rows are there in a truth table (i.e. 22 = 4), similarly truth table consisting three inputs, is made up of eight rows i.e. 23 = 8. 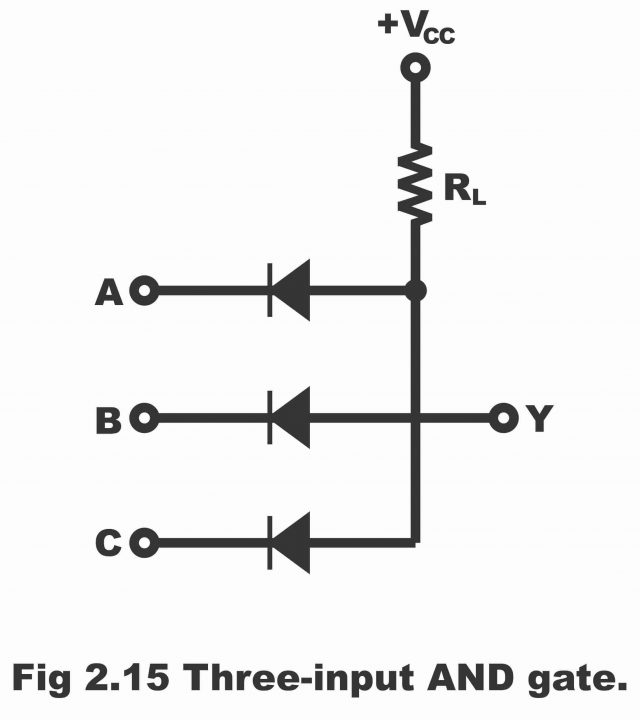 In the figure 2.17, a transistor AND circuit has been depicted, which consists on two inputs A and B and one output C. when both inputs A and B are at +5V, both the transistors Q1 and Q2 conduct (suppose in saturation region). Thus, the current which is produced, passes through R1 and drops the supply voltage +5V parallel to R1. Therefore, point becomes grounded (i.e. its potential becomes zero). As point N is connected to the base of Q3, therefore Q3 also becomes grounded by virtue of N being ground. Resultantly, Q3 gets cut – off, thus supply voltages equal to +5V are received on output point C.

If there is zero volt on any one of either A or B (that’s on the base of Q1 or Q2), then Q1 or Q2 will cut – off and no drop will occur parallel to R1, thus +5V are received on point N, by means of Q3 starts conducting (because Q3 base is connected to point N) and the whole supply voltages will drop parallel to R2. As such zero voltages will be received on point M and output C or output C will become grounded. 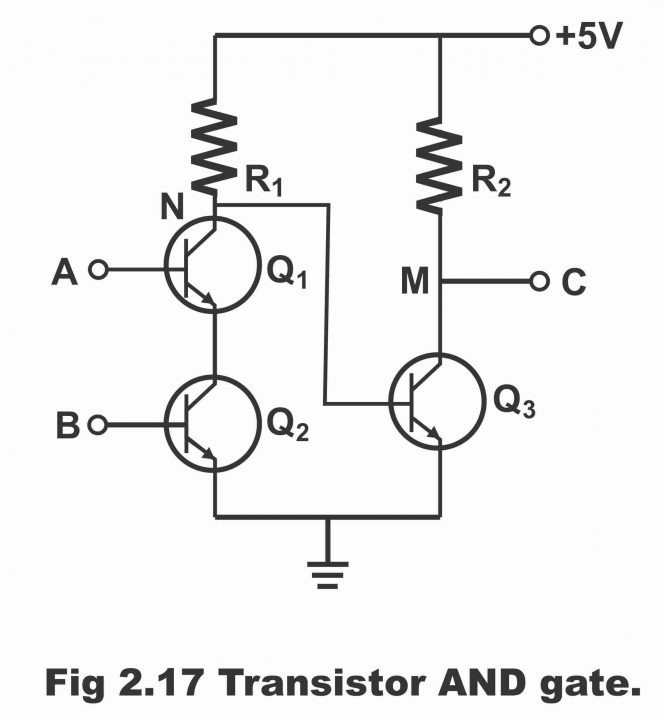