Some of the most commonly used electronics components and tools available on Amazon and Banggood.

The logic gates which are combined for specific Boolean function is called logic design. So, Logic Design is the basic organization of the circuitry of a digital computer. All digital computers are based on a two-valued logic system 1/0, ON/OFF, YES/NO. Computers perform calculations using components called logic gates. Which are made up of integrated circuits that receive an input signal, process it, and change it into an output signal. The components of the gates pass or block a clock pulse as it travels through them, and the output bit of the gates control other gates or output the result. There are three basic kinds of logic gates, called “and”, “or”, and “not”. By connecting logic gates together, a device can be constructed that can perform basic arithmetic functions.

As I have already explained all the logic gates in detail in my previous article, so in this article we will only talk about the SOP and POS in digital logic designing.

The terms “product” and “sum” have been borrowed from mathematics to describe AND and OR logic operations. Any logic system can be represented in one of these two logic ways. As it will be explained in this section, the two forms are equivalent ways of expressing a logic system; however, some logic systems lend themselves to one rather than the other.

A product term is defined as an AND relationship between any number of variables, and a sum term is defined as an OR relationship between any number of logic variables. Any logic system can be represented in two logically equivalent ways: as the OR’ing of AND’ed terms, known as the Sum of Products (SOP) form; or as the AND’ing of OR’ed terms, known as the Product of Sums (POS) form. The two forms are interchangeable, and one form can be transformed to the other following a few basic rules. As an example, consider the XOR relationship YSOP:

This SOP relationship can be expressed in POS form as:

In this example, the POS and SOP forms are equally simple, but this is not always the case. For circuits with more than two inputs, it may turn out that one form is simpler that the other. If a circuit is to be constructed, it makes sense to evaluate both forms so that the simplest one can be constructed.

Implement the Function given below using the SOP.

Implement the function given below using SOP. 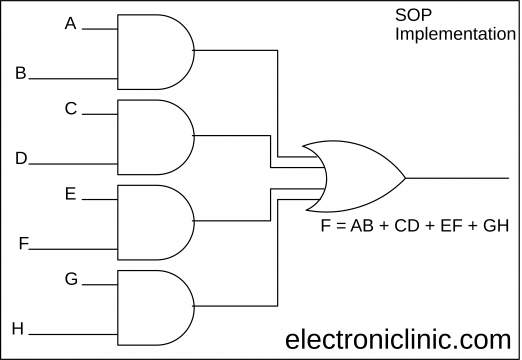 Isn’t it simple? how easily we can construct SOP circuits from given logic equations. Let’s dig deeper and this time we will construct SOP from a Truth Table.

Construct SOP from a Truth Table:

There are certain rules that you need to follow while constructing a logic circuit from any truth table. These rules for the SOP circuits are given below: 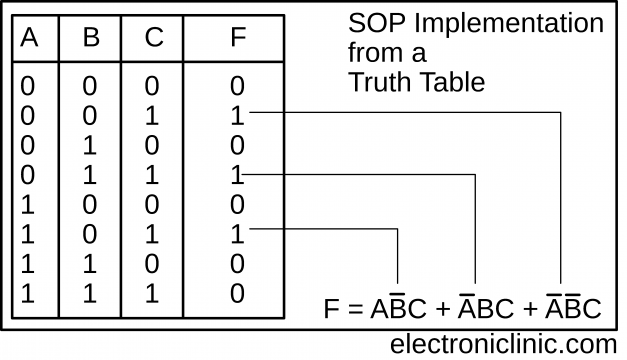 Construct POS from a Truth Table:

Unlike the SOP the POS also has certain rules which are given below.

POS implementation from a truth table given above using OR-AND Gates combination. 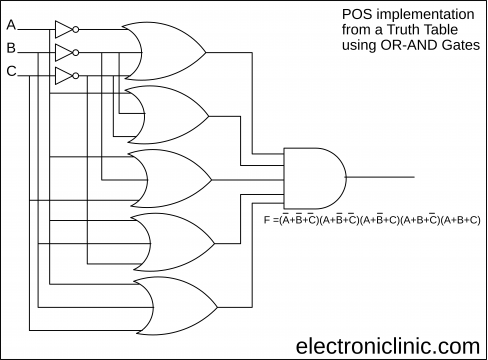 Such type of a variable which have one value among two possible values (0,1).

Package is a combination of similar gates.

A binary variable may be either in its normal form (x) or in it’s complement form x’. Consider three binary variables x, y, and z. The possible combinations will be eight (8).

Where n = number of variables.

Each of these 8 AND terms represents one of the distinct area in the Venn diagram and is called a Minterm or a standard product. Minterms are represented by small letter (m).

Where n is the number of variables. 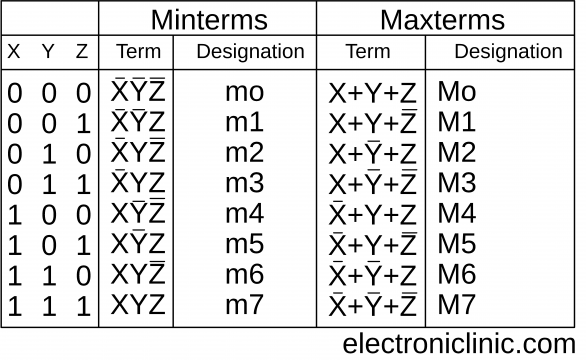 Expressing a Boolean function in SOP or POS is called Canonical form.

Simplified form of the Boolean function for example

For Minterms consider 1’s in the truth table given above

∑ Symbol is only taken in Minterms and it also called. Now for the Maxterms we will consider 0’s from the table.

For Maxterms consider 0’s in the truth table given above. 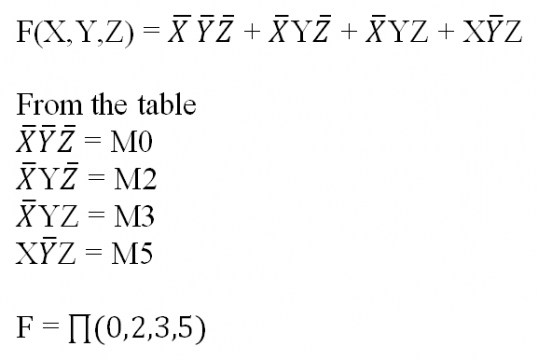 in a product of Maxterm form. 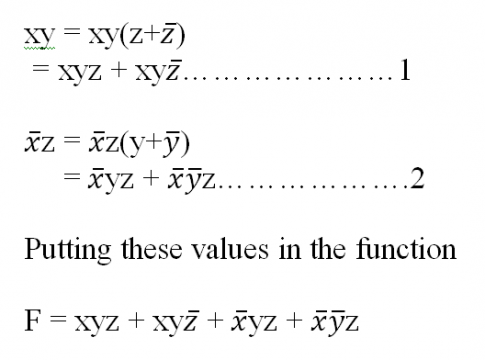 From the truth table below. 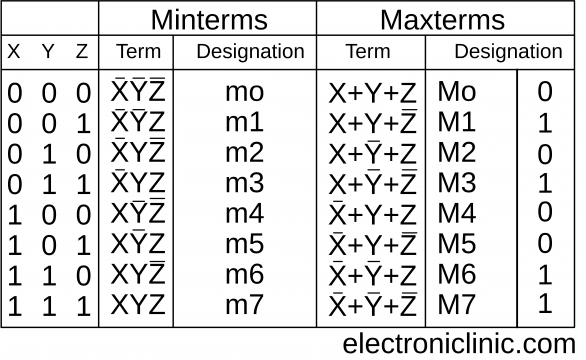 For Maxterms we consider 0’s in the table. We also know that each Maxterm is the complement of the corresponding Minterms.

We know that each Maxterm is the compliment of its corresponding Minterm. The conversion between the canonical forms can be best explained with the help of the following example.

Let’s say for example if we are told to convert

This conversion can be easily done with the help of a truth table I already explained. 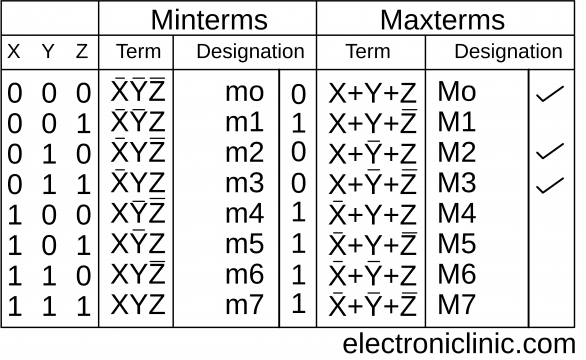