A static switch turns the power to a load on or off but does not vary it in any other way. The bistable characteristic of semiconductor devices like thyristors that is the existence of two stable states conducting and non-conducting suggests that these devices can be used as contactless switch. Their applications in the field of static switching include on-off switches, circuit breakers, contactor, solid state relays and so on.

Comparison of Semiconductor and mechanical switches:

A semiconductor switch offers several advantages over other switching devices:

Some of the disadvantages of a semiconductor switch are:

Static switches are used in both AC and DC switching operations. AC switching requires bidirectional control which is usually implemented by using a triac or two SCRs connected antiparallel. Since the device turns off naturally the upper frequency limit is determined by the type of device used. For high frequency applications a configuration of two antiparallel SCRs is employed. DC switching requires control for only one direction of current flow and the switching device is usually a SCR. The switching speed is limited by the commutation circuit and the reverse recovery time of the SCR.

A static switch or contactor is a switch device that connects on or disconnection off a load from the supply. A static AC switch incorporates three main circuits the power circuit, the firing circuit and the protection circuit.

For high power switching applications the simplest single phase. AC switch is constructed from two SCRs in antiparallel to turn on the power to the load SCR must be turned on at the beginning of the positive half cycle should be turned on at the beginning of the negative half cycle for a negative currents. The SCR witch will turn on immediately if a firing pulse is received at the gate. To maintain the switch in its on state continuous firing pulses are required at the gate since the thyristors turns off naturally at the zero crossing. 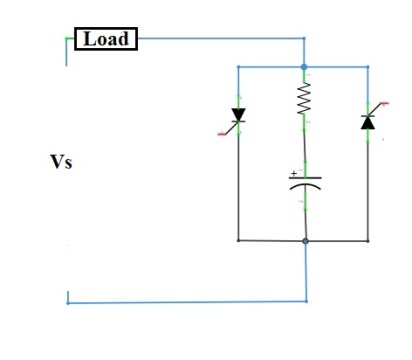 To switch off the power it is sufficient to suppress further firing pulses. The AC current continues to flow until the SCR turns off naturally at zero current. The device will actually turn off within half a cycle of source frequency after the first zero crossing following removal of the firing pulses.

Voltage transients can occur at switching especially with an inductive load and they require suppression using an RC snubber circuit connected in parallel with the SCRs.

The RMS value of the output voltage is given by:

The RMS line current is the same as the RMS load current and is given by:

Where IM is the maximum value of line current. Since each SCR carries the line current for only one half cycle the average current carried by each SCR is

Substituting IM we get

Therefore it is essential to select SCRs with current ratings at least 0.45 times the load current.

The RMS value of the SCR current is

The forward blocking voltage VFB must at least equal to the maximum value of the source voltage is that is,

Where V_S represent the RMS value of the source voltage. The output can be obtained from:

To reduce distortion of the load waveforms due to switching the SCRs must be turned on at the zero crossing of each half cycle of the AC source voltage. The load voltage and current waveforms for a pure resistive load where the gate signal is applied at ⍺=0.
With an RL load the current lags the voltage by a phase angle Φ due to the inductance for highly inductive load Φ becomes greater than the width of the trigger pulse and the SCR will not trigger. To ensure reliable triggering the gate signal needs a wide pulse width from 0 to π. The load voltage and current waveforms for a pure inductor.

The triacs are not yet available with voltage, current and frequency ratings as high as those already available in SCRs. However for low power applications provided the current rating is not exceeded a single triac is more economical to use than a pair of SCRs. A triac also eliminates the need for as second firings circuit. AC switch using a circuit the triac can be turned on by either a positive or a negative trigger pulse and can carry current in both directions. Like an SCR once the triac has turned on the gate loss control over the switching. It regains control after the current has fallen to zero and another gate pulse is needed to turn the device on again.

Two other ways of implementing single phase AC static switches using combinations of SCRs and diodes. Diodes are less expensive than SCRs and do not require firing circuit. The diagram shows an arrangement that requires only one SCR to control both halves of the AC cycle. The SCR is connected across the DC terminals of a full wave diode bridge rectifier. The positive current path is through diodes D1, D4, and the SCR while negative current flows through D2, D3 and SCR. The current is AC through the load and DC through the SCR. Thee load may be resistive or inductive. The gate firing circuit is simple since there is only one SCR to be fired for both the positive and negative half cycles. However since the current has to flow through three devices the power loss is higher due to the forward voltage drop of the devices. 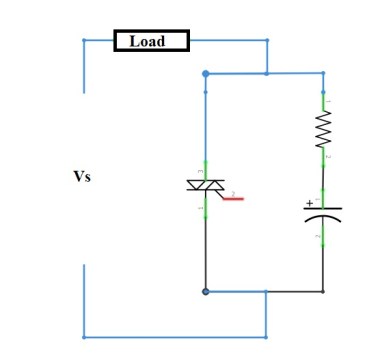 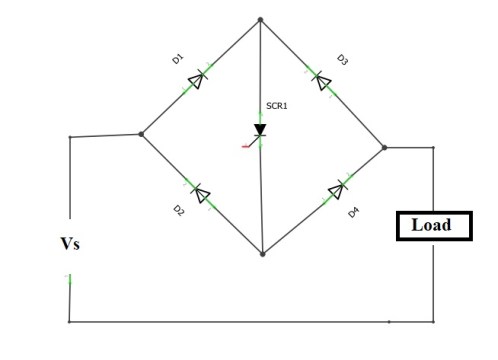 Static switches are often used in applications where high switching frequencies are required, for example in reversing connection where AC machines are switched from one direction to rotation to other by reversing the rotating field. The circuit shown reverses the three phase power supplied to the load. When the switches S1, S2 and S3 are on, line A feed a , line B feeds b and line C feeds c for one direction of rotation. Turning off switches S2 and S3 and turning on S4 and S5 results in line 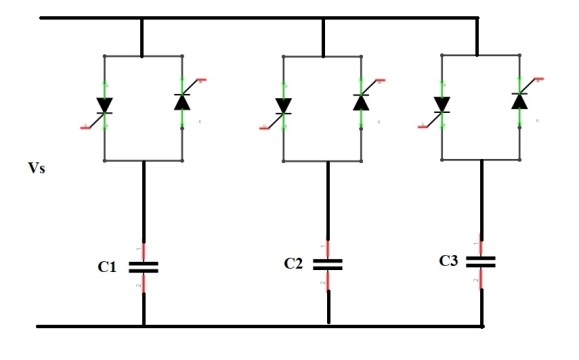 A feeding a, line B feeding c, and line C feeding b, thus achieving a reversal of phase sequence of the voltages supplied to the load. Care must be taken to ensure that S2 and S5 are never turned on simultaneously, or else a short circuit will occur across lines B and C. The same applies to the switches 3 and 4. Also note that in this circuit all switches must be SCRs because diodes would cause short circuits between phases.

By phase control using SCR1and SCR2 the output voltage can be adjusted from zero to the full voltage V1 of this tap. Further increases in voltage can be obtained by increasing the voltage during parts of each half cycle using SCR3 and SCR4. SCR1 is turned on at t1 which is the zero voltage crossing of the positive half-cycle. SCR3 will start conducting and this will automatically turn off SCR1. At t3, SCR2 is turned on and finally SCR4 is fired at t4.

The output voltage can be adjusted continuously to its maximum value by advancing the firing of SCR3 and SCR4 with respect to instant t2 and t4  respectively. Care must be taken to ensure that SCR2 remains off when SCR3 is on since such condition would short circuit the transformer secondary winding. The same holds true for SCR4 and SCR1. This method of tap changing can be easily extended to transformer with multitap winding for further voltage adjustement.

Consider the circuit in which an AC switches controls power to an inductor. If the AC switch is turned on after the peak of the source voltage the load current will flow for less than 180 and its effective value will depend  on the delay angle ⍺ that is the reactive power drawn from the source can be continuously controlled by varying the delay angle. This circuit arrangement which is called a thyristor controlled inductor can be therefore be used to obtain adjustable values of inductive or lagging VARs. Unfortunately most practical loads being inductive in nature also draw lagging VARSs from the source. These loads require capacitive or leading VARs to compensate for the lagging power factor.

A thyristor switched capacitor uses capacitor to generate leading VARs. However if the firing angle is arbitrarily varied to control the VARs the current through the AC switch flows in large pulsation as the capacitor voltage equalizes with source voltage. These pulses can easily damage the switching device. Therefore firing must be synchronized to occur when the instantaneous source voltage is equal to the capacitor voltage. VAR control is achieved by splitting the capacitor in to banks and controlling each bank with separate AC switch. Capacitor banks are turned on as required to provide necessary VARs. This circuit has the disadvantage of requiring an AC switch and its associated firing circuit for each bank. Also since the capacitor bank can be switched only in steps VAR compensation is  achieved in discrete steps rather than by continuous control. Therefore a TSC arrangement is suitable only if the load requires fixed VAR adjustment.

An un-switched capacitor provides the maximum leading VARs that will be required while a phase control AC switch in series with the inductor subtracts a continuously controllable number of lagging VARs. This is the basis of the static VAR controller.

Static VAR controller are attracting attention for use in installation with rapidly varying reactive power requirements such as arc furnaces where they provide quick and precise control of reactive power. The leading VARs leading necessary for VAR compensation are supplied by connecting a TSC across the AC lines. The schematic show in which the capacitor banks are connected or disconnected using SCRs to correct the load power factor. For loads with varying VAR requirements a TC1 is placed in parallel with the TCS. The capacitors bank are switched in and out to provide a fixed amount of leading VARs. Using the phase control the inductor absorbs a variable amount of lagging VARs drawn by the TC1 is equal to the leading VARs supplied by the capacitor the net reactive power will be zero and the load power factor becomes lagging the lagging VARs of the TC1 can be decreased by adjusting the delay angle thereby increasing the net leading VARs. This way the TSC provides leading VARs in discrete steps while the TC1 provides precise continuous control between steps. The same technique can applied to three phase circuits.