Semiconductors are of the following types

There are further two types of extrinsic semiconductors.

Intrinsic type semiconductor is one which is made from a semiconductor material in an extremely pure form; it does not have amalgamation of any other material.

For example, a silicon crystal is called intrinsic semiconductor, when each of its atom is of silicon type. Pure germanium and pure silicon, the energy gaps of which are 0.72 eV and 1.1eV respectively, are common examples of intrinsic tpes of  semiconductors. Their energy gap is so small that even at normal temperature, several electrons (through absorbing adequate energy) crossing or jumping this small energy gap, move to conduction band from valence band, due to which a positively charged hole is produced in the valence band (as shown in the figure 1.32). Semiconductor is supplied an electric field at 0⁰K temperature, conduction electrons start moving towards anode while and the holes found in cathode, start moving towards cathode. Thus, due to the mutual movement of electrons and holes in opposite directions, semiconductor current is produced in conduction and valence bands (or the flow of semiconductor current starts). Electron current come into effect due to the movement of electrons in conduction band, whereas hole current as a result of jumping of one atom to other. Therefore, an intrinsic semiconductor can also be defined as a semiconductor, in which the number of conduction electrons and holes is equal. The different forms of an intrinsic types of semiconductors have been explained below:

An intrinsic silicon crystal has been displayed on metal end surfaces in figure 1.33 (a). An electric field is developed on middle of crystal ends through supplying an external voltage source to crystal ends. Whether current passes through crystals or not, depends on the value of temperature. If the ambient temperature is at absolute zero, then a valence orbit of every silicon atom consists of 8 electrons, as these valence electrons are so strongly combined together due to covalent bonds, that at absolute zero, these cannot be isolated from its atom. Therefore, irrespective of an applied voltage, silicon crystal functions as an insulator, because there are no free electrons in it for producing current.

At Above Absolute Zero

Atoms start vibrating as soon as temperature increases from absolute zero (that’s vibration or convulsion produces depending upon the value of temperature). As a result of this, valence electron moves from valence to conduction band through availing suitable energy. As some free electrons still exist, i.e. some free electrons can be obtained via raising temperature a little, therefore, a very small stint of current flow through the crystal, i.e. a very small stint of current generates in crystal.

A part of silicon crystal has been shown in diagram 1.33 (a). Suppose a hole and a free electron is produced through thermal energy. Free electrons continue to remain in a very big orbit. Through the application of an external electric source, free electron moves rightward. For this rightward movement, it moves from one large orbit to a second large orbit and from second to a third large orbit. In this way, free-electron takes part in the cumulative flow of electrons within a silicon crystal.  Thus, we can inculcate the concept of a steady stream of free electrons from a negative source terminal to a positive source terminal (as shown in figure a) 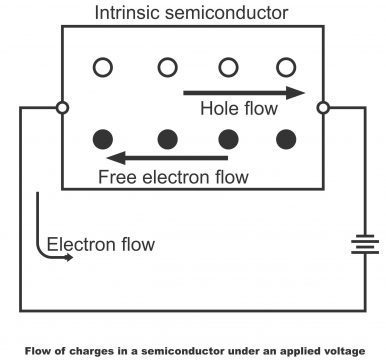 Suppose, covalent bond breaks on point A. An electron from point A goes toconduction band via crystal and leaves behind a hole in the covalent bond. Electron on B jumps into the hole on A, after which electron of jumps into the hole on B, and this process moves on. Thus a hole develops on G due to the movement of electrons in turn, and a negative charged electron will move from G towards A. On the contrary, a positive hole will move from A towards G. The flow velocity of holes will be smaller than the flow velocity of electrons.

It may plainly be understood that a hole by itself is not a positive charge, as it is just a vacancy in the valance band, which is called hole. That’s it is a place, where a valence electron exists prior to proceeding to the conduction band. However, as a consequence of numerous experiments, it has been revealed that a hole moves and acts just like a positive charge. In order to understand, two methods of intrinsic conduction have been shown in figure 1.36. According to figure (a), free electrons and valence electrons both move towards right direction, while in the diagram (b), free electrons have been shown moving to right, while holes towards left.

Note; A semiconductor differs from a conductor because it is capable of the following two atomic paths.

There are further two types of an extrinsic semiconductor on the basis of doping material applied in a pure semiconductor,

Amalgamation of some pentavalent material e.g. antimony or arsenic with a pure germanium or silicon crystal, results in N-Type Extrinsic semiconductor (as shown in figure 1.37). Every antimony atom, via coordination with 4 neighboring germanium atoms and 4 of its 5 electrons, build a covalent bond, while its 5th electron becomes superfluous and is slackly connected with antimony atom. Thus, via augmentation in thermal energy or setting up an electric field, this superfluous or extra electron can easily be excited to conductance band from valence band. Thus, every antimony electron in germanium atom or germanium lattice, practically presents a conduction electron or superfluous electron (without the creation of a positive hole). Antimony, is called donor impurity. Thus, through combining any pentavalent material (antimony, phosphorous, arsenic) with some pure germanium or silicon, extrinsic semiconductor gets developed (N means negative or minus). In the figure 1.38, arsenic has been shown to be combined with silicon crystal.

It should be kept into mind that donor atom, by means of sacrificing one of its valence electrons, becomes a positively charged ion, however it does not participate in conduction, because it is firmly fixed into the crystal structure.

When a trivalent impurity (e.g. boron) is integrated into some pure germanium (or silicon), we get P-Type semiconductors.

In such a case, 3 valence electrons of boron atom by combining with of 4 germanium atoms found close by, produce 3 covalent bonds, while one bond remains incomplete. (displayed in diagram 1.41 “a”)

Thus, a number of positive holes develop by means of combining boron(also called as an acceptor impurity) with germanium crystal. Thus, for the acquisition of P-Type extrinsic semiconductor (P means positive), trivalent impurity (e.g. boron, aluminum or indium) is combined to some unadulterated germanium or silicon crystal.

No free charge carriers are found on a piece of uncontaminated germanium or silicon at 0⁰K, however, as its temperature is increased (up to room temperature), some of its covalent bonds break up due to heat energy, due to which electron hole pairs are generated. These are called thermally generated charge carriers or also called intrinsically accessible charge carriers. Normally, their number is very small. Intrinsic of a pure germanium can be converted to a P-type semiconductor by means of including an acceptor or trivalent impurity, due to which a large number of holes are produced within it. Thus, a P-type material contains the following charge carriers.

(a). A large number of positive holes -majority of which generate via combining some kind of impurity, whereas number of holes, generated through the thermal heat, is small.

(b). A very small number of thermally generated electrons – Normally, number of holes (generated both through adding impurity and via heat) in a P-type material exceeds the number of electrons. Thus, in such type of material, holes are called majority carriers whereas electrons are minority carriers. (figure 1.43 “a”)