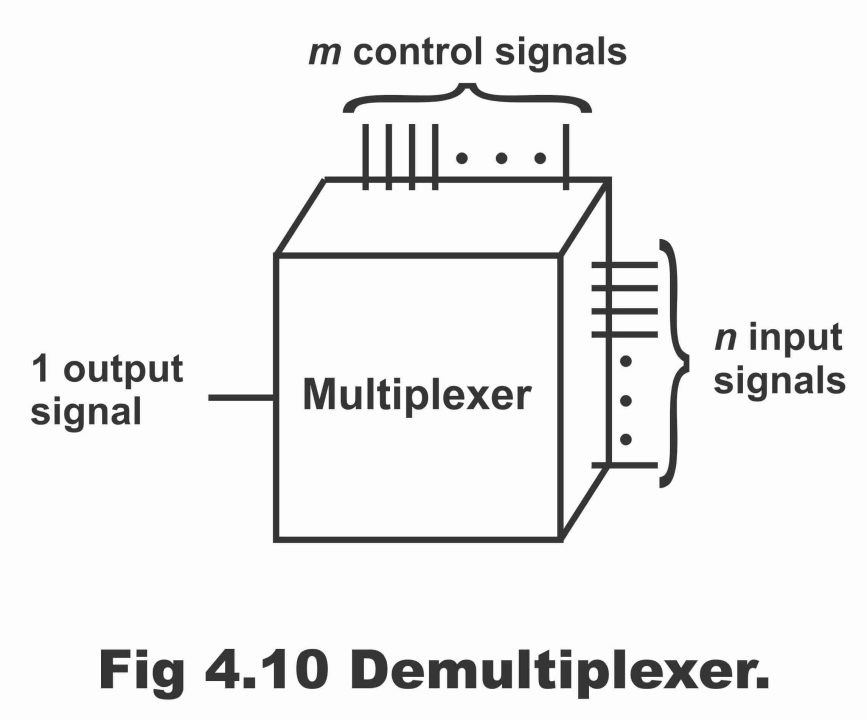 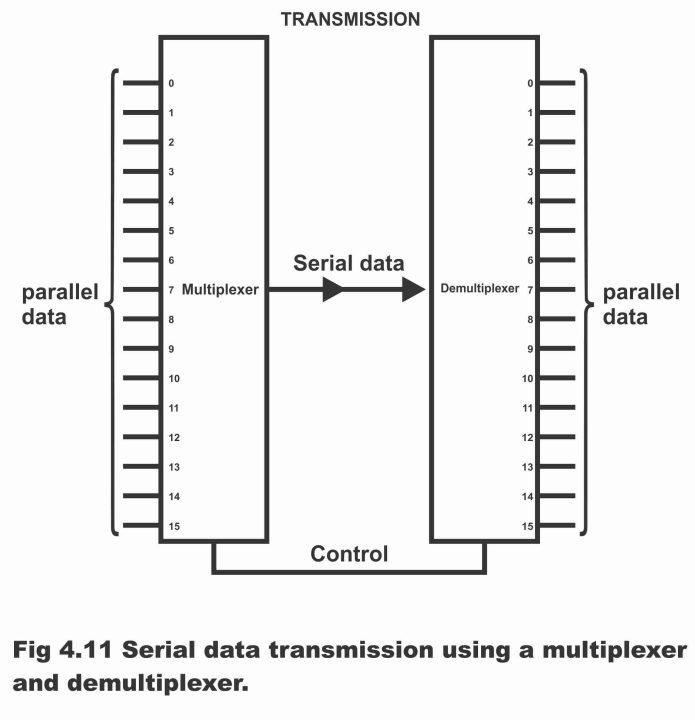 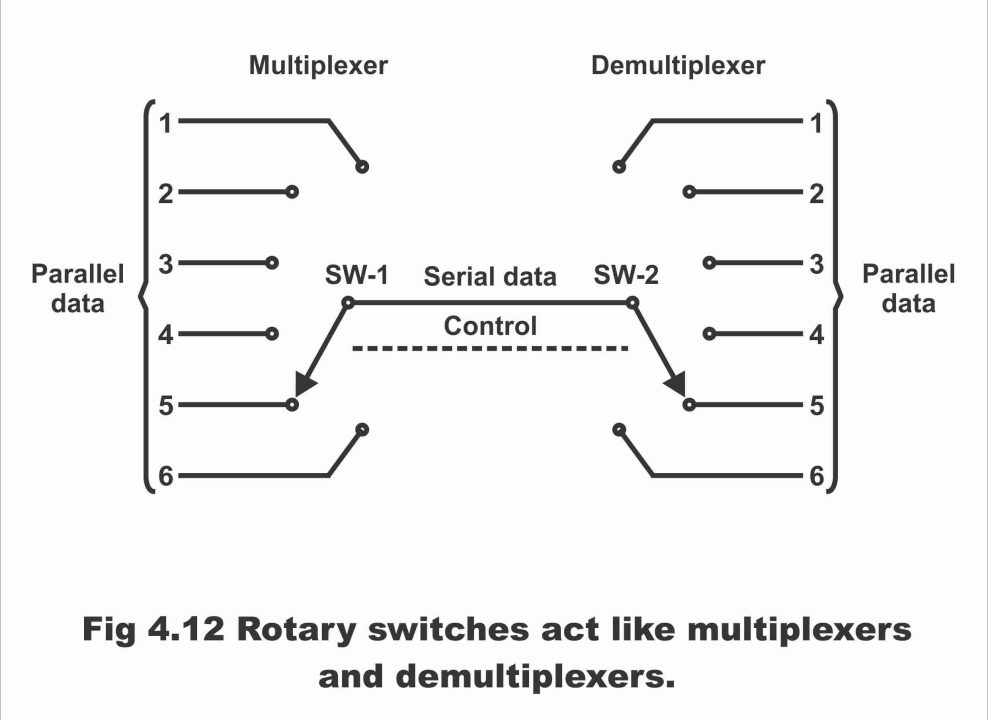 Some examples of digital demultiplexers are as under:

In figure 4.13 (a) logic circuit of one input and 4 output demultiplexer has been illustrated, whereas block diagram of this circuit has been depicted in figure (b).

According to this figure, one data input line has been applied simultaneously on all four AND gates. Two data select lines can enable or activate only one gate at a time. Thus, data appearing on data input line, reaches the corresponding data output line via the selected gate. In other words, one word containing two bits S0S1 can select just one gate at a given time, which has to work. In this way, data input passes through the selected gate and reaches the output line. Remember that when any one of the gates is operating or it is enabled, rest of the three gates do not work at that time (i.e. all other gates become disabled during that time). 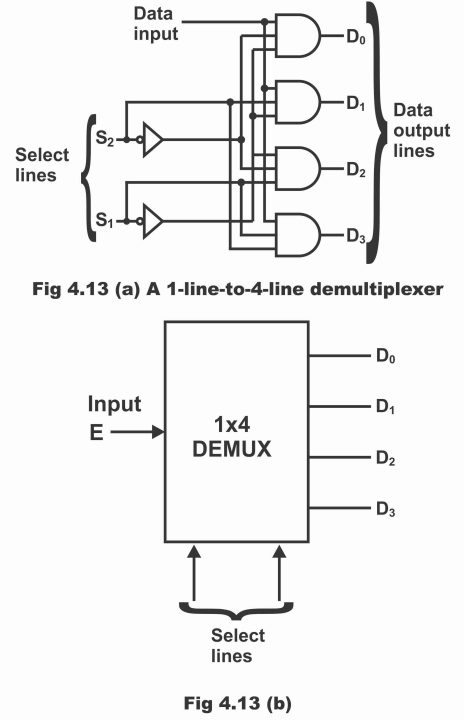 The working mechanism of a 1 – line – to – 4 – line demultiplexer shown in the figure (a) is as follows, which can also easily be understood with the help of a table shown in figure 4.14.

As the name suggests, this multiplexer consists of 8 outputs, one inputs and three control or select lines as can be seen in the figure 4.15 (a). One data input line E of this multiplexer has been connected simultaneously with all the gates. These three gates remain enable or work alternately according to the address provided by all 3 select lines ABC. The gate which is enabled, (i.e. gate having all inputs as 111), only that gate lets input data E passes through it to provide it on output data line. 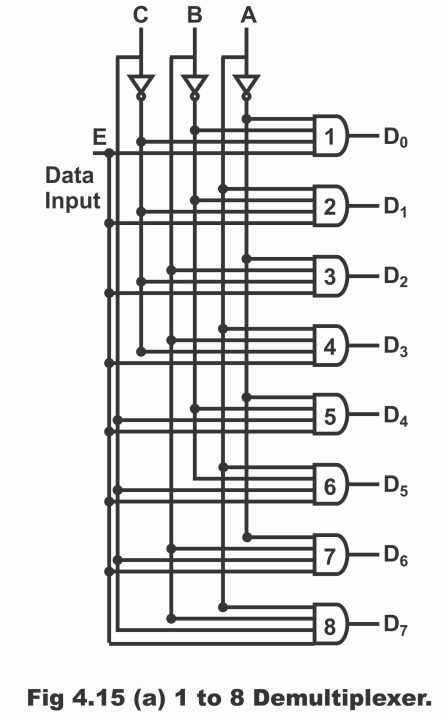 In order to operate this type of a circuit, first data is provided on its input line. After this, where ever this data has to proceeded, that address is introduced via control lines or select lines. Suppose, we provide 010 address on the control lines after providing input data. In such a situation, only gate 3 becomes enabled or it operates (because only gate number 3 inputs are 111 after select lines values become 010, and this is a condition for the operation of any AND gate) while rest of the gates remain disabled (because providing 010 address on the select lines, at least one input of the gates, except gate number is inevitably zero). Thus, input data is received on output line D2 via gate number 3. It must be remembered that transmission of input data on output lines depends on the control signals being provided on ABC. According to signals, only one gate out of all can operate at a time, via which input data transmits on output.

Now assume that value of select lines is 110 i.e. ABC = 110. In this case, only gate number 4 operates and input data is transmitted on output line D3. In figure 4.15 (b), function table of this circuit has been demonstrated, with the help of which this operation or process can be understood quite easily.

When ABC = 111, only gate number 3 operates, while in such a situation, rest of the gates remain inactive, resultantly input data transmits on output data line D7 via this AND gate.

74154 is a type of demultiplexer, which contains one input and 16 outputs. In figure 4.16, the logic circuit of a 1 – 16 demultiplexer or Distributor has been illustrated. The input bit has been represented by D in this diagram. The transmission of this input data bit towards output line data bit depends on the value of control input ABCD. 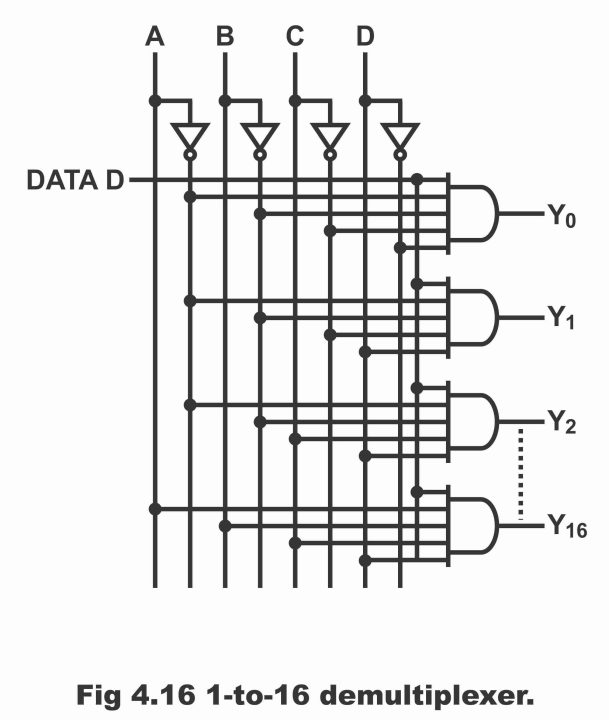 In figure 4.18, logic diagram of a 74154 has been demonstrated, in which an input data bit (pin number 18) can be seen which works under the nibble control of ABCD. This data bit transmits automatically to output line via the decimal numbered gate which is equivalent to ABCD. The bubble or circle sign above strobe reflects its active low input. As a bubble sign has been drawn on pin number 18, therefore data on input inverts. Bubble sign exists on every output as well, which re – inverts the inverted data received or transmitted via this input.  As a result of this double inversion on input and outputs, data passing through 74514 is unchanged. 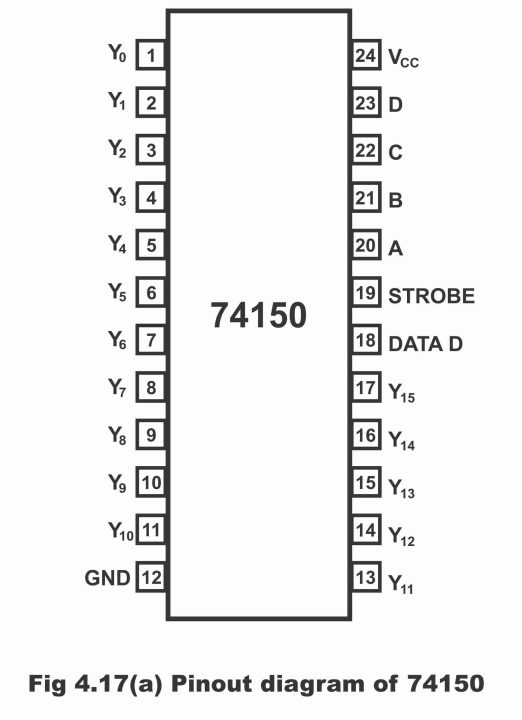 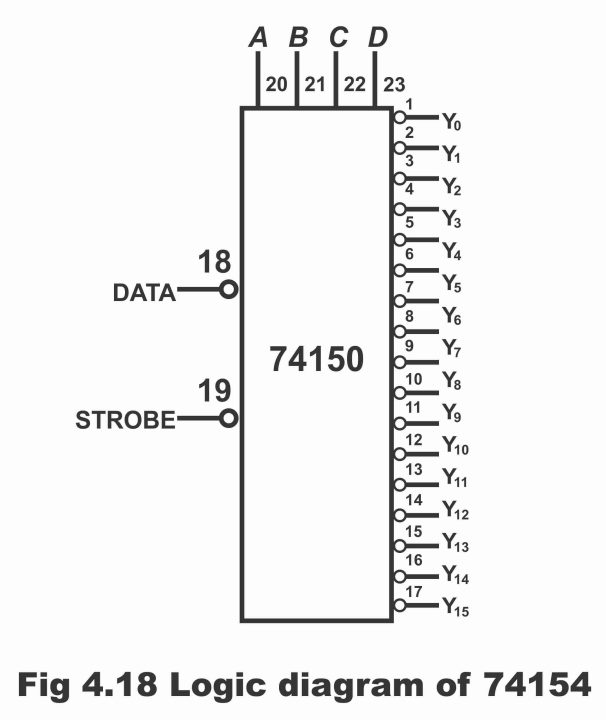 When ABCD = 0000, in such a situation top most AND gate becomes enabled, whereas all other AND gates become disabled. Thus, data bit D transmits only towards output Y0 i.e. Y0 = D. Remember that if D is low, Y0 will also be low. However, if D is high, Y0 will also be high, as the value of Y0 depends on the value of D. All other remaining outputs are in low state.

If the value of control nibble changes to 1111, i.e. ABCD = 1111, all AND gates except the bottom gate become disabled (i.e. only the bottom gate operates, and rest of the gates except this one remains inactive). Thus, D transmits only towards Y15 i.e. Y15 = D). In other words, according to the address provided by control lines or select lines selection of this AND gate comes into effect, via which input data transmits and received on output line.