A multiplexer is a logic circuit or device, which selects one input line out of numerous input lines and lets it pass through the output line. Or it is a combinational logic circuit, which selects binary data or binary information from one input line out of several input lines and pass on this data to a single output line, is called multiplexer or Data Selector. In simple words, an electronic circuit, which selects just one input from a number of inputs at a time, and then provides it on output, is known as multiplexer. Any input can transmit on output by means of using control signals. Multiplexers can also shortly be expressed as MUX. As it is a digital circuit, which chose just one channel input from among numerous channel inputs, therefore it is called a data selector. Remember that multiplex means “many into one” and multiplexing means transmitting a very large number of information units through smaller channels or very few lines. The selection of a signal or a specific input line is controlled via control signals or a set of selection lines. Normally, “n” is input signals or input lines and “m” are control signals or selection lines, through the bit combination of which, it is decided which of the input has been selected. This has been manifested in figure 4.2. This particular circuit comprises “n” input signals, “m” control signals and 1 output signal. 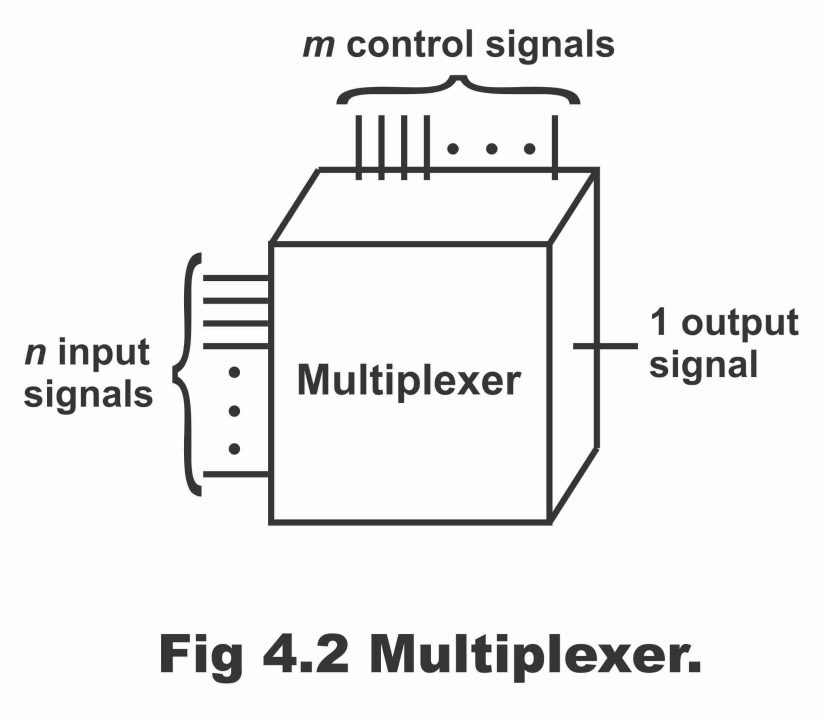 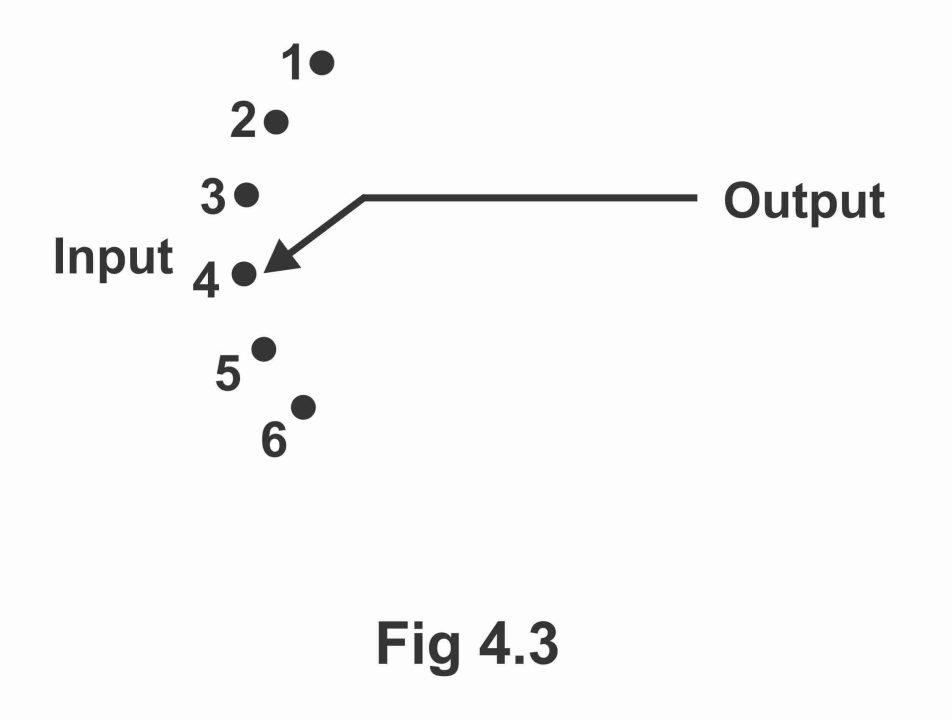 In this figure, a mechanical rotary switch or a rotary selector switch has been shown being used as a multiplexer. Any one of the given six inputs (the number of inputs may be less or higher) can be connected to output by means of adjusting position of the rotary switch (or by rotating it through hands). Thus, input on which the selector switch is connected, only that particular input, output is received. As such a multiplexer or Data Selector can also be defined as “many into one’. As the speed of such type of mechanical rotary switch or mechanical multiplexer is very low and these are also not automatic, thus for performing a faster and an automatic multiplexing operation, digital multiplexers are fabricated with the help of logic gates.

Numerous digital multiplexers ICs are as under:

In figure 4.4, the logic diagram, block diagram and function table of a 4 – bit multiplexer or data selector have been shown. In this circuit, every input line out of the four input lines (I0 to I3) has been connected with an input of AND gate. Selection lines are S1 and S2, which have been decoded in such a way that they can select a specific AND gate during a given time or they can control or select a specific AND gate. The function table shown in the figure (b) indicates input and output path for every possible bit combination of the selection line (in other words function table specifies the path, by means of which the signal of the selected input reaches output). When this MSI function is applied in the designing of a digital system, it is represented in the form of a block diagram as has been shown in figure (c). 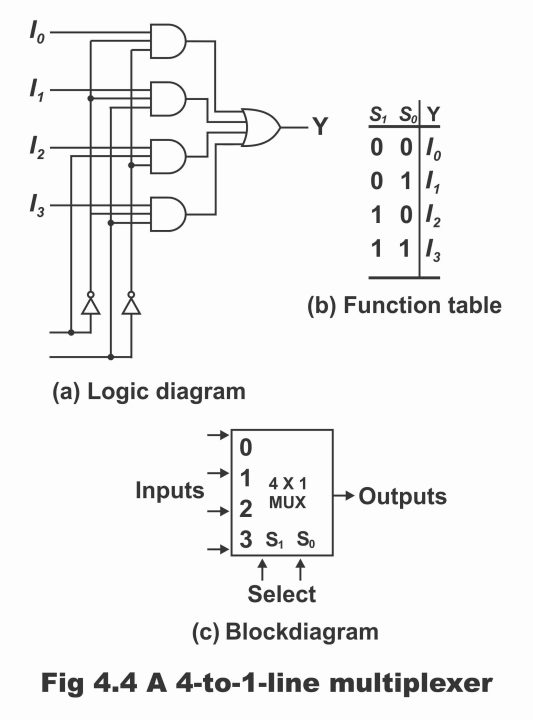 8-to-1 line multiplexer or Data Selector

In figure 4.5, logic diagram and logic symbol of an 8 – inputs multiplexer has been illustrated. It is clear from this figure that this circuit has 8 data input lines and three data select or control lines, whereas it has one output line, along which another inverted output line has also been shown. As we need active low output for some of the applications and active high output for certain others, therefore this kind of facility has also been inducted on this particular circuit. Remember that AND gates and inverters in multiplexers resemble in appearance to a decoder circuit and in fact, they decode input selection lines. Similar to a decoder, there is an enabled input in multiplexer ICs, which control functioning of the unit. When enabled input is in a given binary state (i.e. 1), circuit does not operate at all (i.e. output is disabled in such a situation). And when enabled input is in its other state (i.e. 0) or in its enabled – state, the circuit operates as a normal multiplexer. Enable – inputs are also occasionally known as “strobe”. In figure (a), outputs of all AND gates are received by a NOR gate, which has an output 1 at that time, whereas all of its inputs are zero or its output is 0 at that time, when any one of its inputs or two or three inputs are 1.

According to the figure, entire data inputs D0 to D7, have been loaded in parallel and out of 8 data inputs, any one is selected in order to provide three binary bits (ABC) on output. In case enabled inputs are high, all gates 1-8 stops working and when it is low, all gates start operating. Three-bit binary input word (ABC) lets only one gate out of the eight to operate according to the input code and provides input on output of that gate only. In such a condition, output of remnant 7 gates is zero. This binary word comprising three input tends to code an address, which decides which of one of the data input lines from D0 to D7 will be selected or operated. (In other words, for selecting any one input signal out of 8 – input signals, we need a 3 – bit address). Six inverters on data select input lines, produce normal and complement signals, which require gates (1 – 8). In the figure, data output and its complement both have been given. 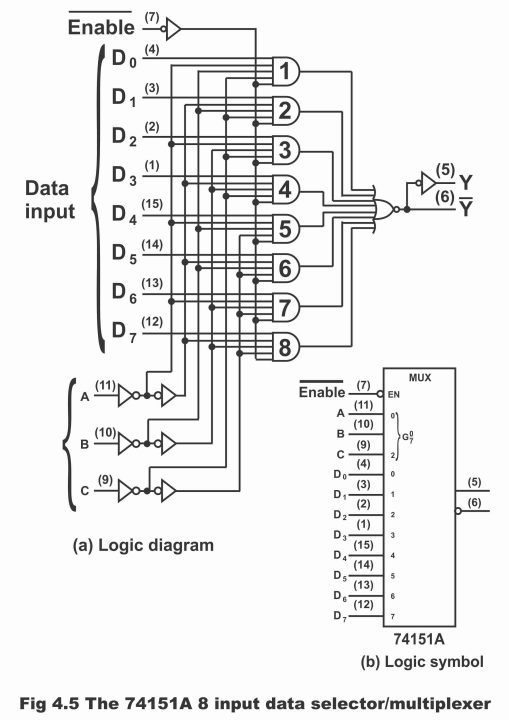 When a state of binary 101 happens on the control lines or data select lines (ABC), then data input line D5 is selected (because 1×22 + 0x21 + 1×20 =5). Thus, the entire data existing on input line D5, is received on the output line in normal and complement form.

When a condition of binary 011 creates on data select lines, then data input line D3 is selected (because 0x22 + 1×21+ 1×20 = 3). As such, all data present on input line D3 is received on output line. Remember that circuit has been designed in such a manner that data only of the selected line is transferred to output line. Whereas under such a situation, all gates except the one connected with the selected line, remain disabled (or they do not operate)

As the name implies, it is a type of multiplexer, which consists of 16 data inputs, four data select lines and only one output (i.e. this multiplexer selects just one input out of 16 inputs at a time and provides it on output line). In terms of ICs, its number is 74150. The logic diagram of a 16 – to -1 multiplexer in figure 4.6, its pin – out diagram in figure 4.7 and truth table in figure 4.8 has been illustrated. 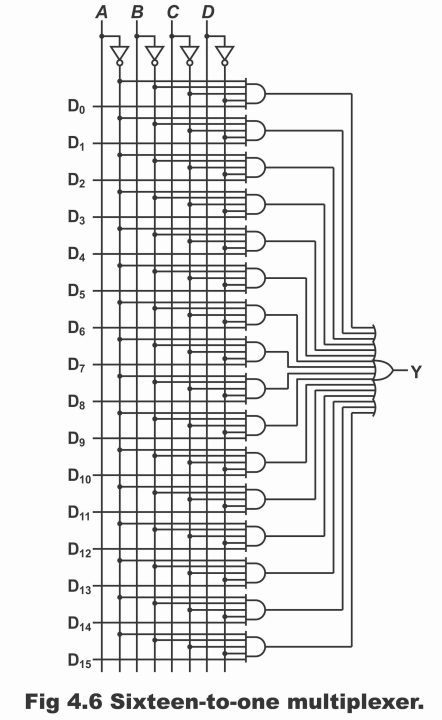 The pin diagram displayed in figure 4.7 (a) is the pin – diagram of the TTL 74150 multiplexer, in which all pins 1 – 8 and 16 -23, are reserved for input data D0 to D15, whereas pin numbers 11, 13, 14, and 15 acts as control bits or selection bits for ABCD. Pin number 10 is specific for output, which provides a complement of the selected bits. Pin number 9 is for strobe, which enables a multiplexer (i.e. lets it work) or disables it (i.e. does not allow it to work or operate). It is evident from the truth table of 74150 given in figure 4.8, that when the strobe is low, the multiplexer operates during that period of time (i.e. when the strobe is low, the multiplexer having been enabled, starts providing output). As a result of the multiplexer operation, an output Y is obtained from it, which is a complement of the input data. On the contrary, when the strobe is high, the multiplexer does not operate (i.e. multiplexer disables during such a situation and does not have any sort of impact on control data ABCD) 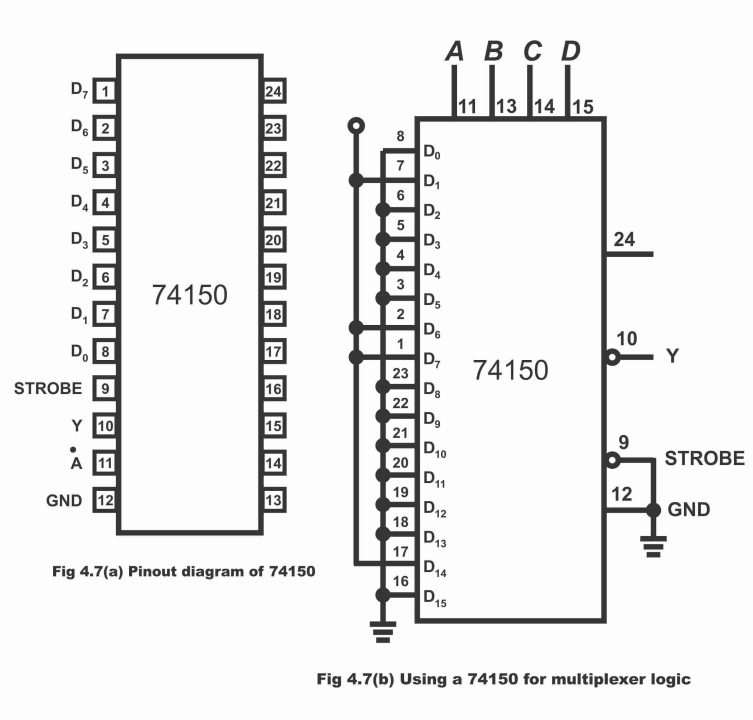 We know that out of the entire input bits (D0 – D15), at a time only that particular one bit transmits towards output, which has been selected by means of control inputs ABCD. For example, if the value of ABCD is 0000 (i.e. ABCD = 0000), in such a situation, the topmost gate is enabled, while rest of the gates get disabled (i.e. only the topmost AND gate, which is connected to D0, operates and rest of the gates do not operate). In other words, when ABCD = 0000, AND gate associated with D0 gets these values of ABCD as 1111 by means of being inverted via an inverter, due to which output of AND gate becomes 1. As such, output of OR gate also becomes 1, resultantly input data present on D0, transmits to output line. Or binary input data present on D0 gets a path for reaching to output (i.e. Y = D0). Remember that in case D0 is low, output Y will also be low and if D0 is high, Y will also be high (i.e. Y depends on the value of D0).

If the value of control nibble changes to ABCD = 1111 (a collection consisting of 4 – bits is called nibble) all gates except the final AND gate, become disabled. In such a situation, data present on D15 only is received on output i.e. D15 = Y

Note: if the 16 – inputs OR gate shown in the logic diagram figure 4.2 is replaced with NOR gate, in such a situation, we get a complement of selected data bit instead of actual data bit on the output, i.e. we get an output utterly in contrast with the above – mentioned explanation. Therefore, if D0 is low, then using NOR gate instead of an OR gate, D0 becomes high. Or the complement of D0 is obtained.

For example, when ABCD = 0111, output is equal to the complement of D7 i.e. Y = D7.  It is a Boolean expression of a transistor-transistor logic (TTL) multiplexer, because an inverter is being mounted on the output of such type of circuit, which is complement of the selected data bits.

Next Topic: Demultiplexer or Distributor with circuit diagram and operation