Exclusive NOR Gate or XNOR

Just like a NOR gate and a NAND gate, an exclusive NOR gate or (XNOR) is a gate, output of which is totally opposite or inverted to an exclusive OR gate (XOR). That’s the reason, this gate is also known as not – XOR gate (that’s basically this gate is XOR gate, however an inverter is being fitted on it). The logical symbol of XNOR gate has been illustrated in the figure 2.31 (a). if we carefully look at this symbol, it seems just analogous to the symbol of a XOR gate, except that a round circle or a bubble has been drawn on its output, which reflects inversion process (i.e. the round circle implies that output of XNOR gate is exactly inverted or to complemented to the output of XOR gate)

When logic levels of the two inputs are mutually opposite, low output is received from exclusive NOR gate (XNOR). If A and B are two inputs, while C is output, the function of XNOR gate can be narrated in the following words.

Figure 2.31 (a). XNOR gate logic symbol (b). A Boolean expression for the output of an XNOR gate 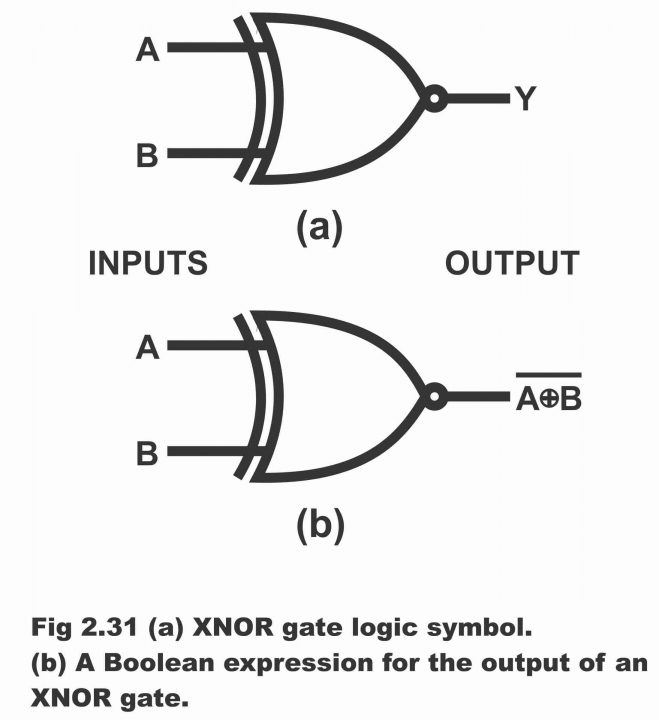 In figure (b), Boolean expression of XNOR gate has been illustrated, which is as follows:

In figure 2.32, truth tables of XNOR gate and XOR gate have been displayed side by side, so that outputs of both could easily be compared. It is clearly visible from this table that XNOR gates’ output is complement or inverted to the XOR gates’ output. It means that when, when both inputs are high or low in case of XNOR, a high output is received (though, a low output is received through XOR gate, in such a situation), as is evident from the first and fourth line of the table. The possible logic levels of XNOR gate has been elucidated vide figure 2.33 as well.

Figure: 2.33 All possible logic levels for an exclusive – NOR gate

Next Topic: Types of Logic Gate and its Applications