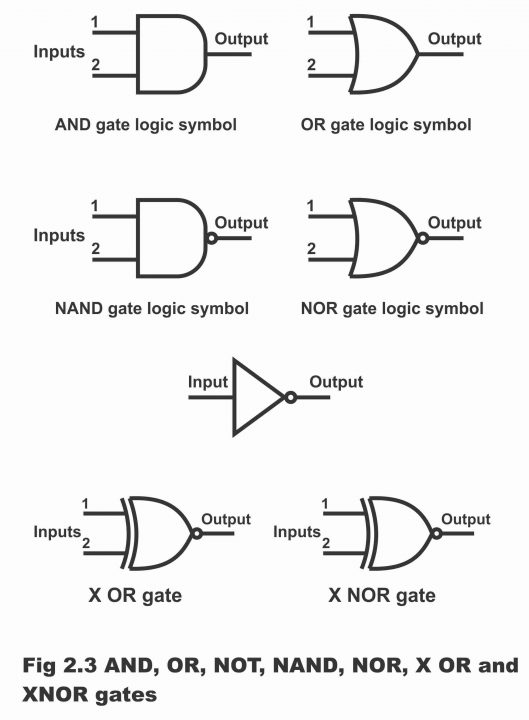 In figure 2.34, a summary of different types of logic gates has been presented. 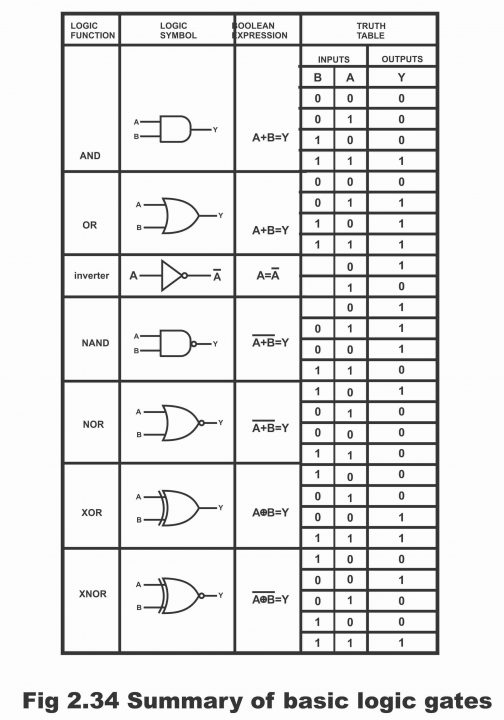 The range of usage of logic gates is quite extensive, however some of its distinct applications are as follows:

A large number of digital systems are designed by mixing a number of different logic functions (e.g. OR, AND, Inverter, NAND, NOR, XOR and XNOR). All such logic circuits are available in IC modules and these modules have been distributed into different families. Every family is denoted by a few short words or abbreviations, which indicate the type of logic circuit being used in this family. For example, RTL means resistor, transistor logic. These days, the following seven transistor logic families are more famous, though the usage of the first two of these seven families has become confined or almost finished these days. However, here these are narrated just from the point of view of a historical perspective.

Prior to knowing the details (which is coming ahead) of different logic families, it is essential to understand its various characteristics, because all families have different characteristics.

Logic circuits, in which transistor function or drive in a state of saturation, are known as saturated logic circuits or simply saturated logic. One of the disadvantages of this circuit is that when transistor is brought out from its saturation state, they take some time in coming out from that state. (i.e. when a saturated circuit is turned off, it does not turn of instantly, rather it tends to turn off after some delay, which is its greatest demerit). It is because when a transistor saturates, in such a situation its base is flooded with majority carriers (by means of which an extensive current continues passing through it), until even if the base voltages are turned off, as has been revealed in the figure 2.35, even then the flow of carriers from its base tends to continue for some time. That’s if its base voltages are turned off for turning the transistor off, even then its base remains flooded with carriers as the base requires some time for these carriers to flush out completely (i.e. even after transistor turns off, carriers keep transmitting through the base for quite some time, until all carriers have been depleted). In case of saturation, the time required for the current carriers existing on any transistors’ base, pushing out from the transistor’s base, after it has been turned off, is known as saturation delay time (Ts). (In simple words, the time required for ejecting out carriers present on the base of a transistor, is called saturation delay time). Therefore, due to this very reason, the switching speed of a saturated logic circuit is low. Transistor transistor logic circuit (TTL) is an example of saturated logic circuits. 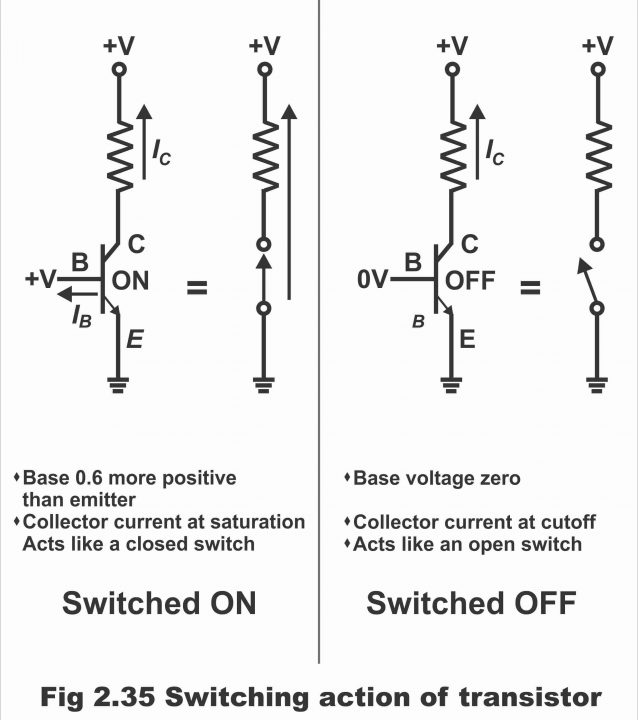 Next Topic: Selection of Logic Gates or Digital Integrated Circuits

Control multiple loads using only one button and a Potentiometer, Arduino Project