The NOT Gate or Inverter

NOT gate is such a digital circuit or gate, which consists of just one input and one output. As this gate inverses the input (that’s its output is not equal to its input) therefore due to the inverting input signals, it is also known as an inverter. In other words, output of a NOT gate is always converse to its input (i.e. if input is 1, output is zero and if input is zero, output will be 1), therefore it is called a NOT gate. It must be remembered that NOT gates’ process of inversion is also called Negation or Complementation, because binary 1 and binary 0 are inverted to each other. In figure 2.18 (a) symbol of a NOT gate or Inverter and figure (b) its truth table has been shown. It is clear from the figure that input and output are mutually reversed or complementary. The symbol of a NOT gate as has been shown in the figure (a) resembles symbol of a triangular or an amplifier. However, a small circle or bubble can also be seen drawn on this triangle, which reveals inversion. It is worth mentioning here that if this small circle or bubble had been drawn in the beginning of the triangular symbol instead of at its end, even then it would have meant inversion. 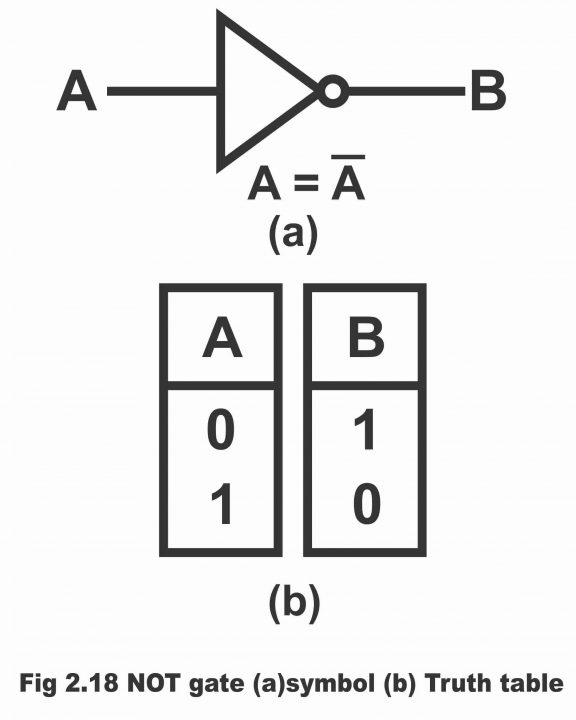 The logical symbol of a NOT gate is denoted via placing a bar above the function, which indicates inverse or opposite state of the input. For example, A means NOT A, similarly, (A+B) imply (A+B) complement or inverse. However, sometime, A is also represented as simply A.

As the bar placed above an output in the Boolean algebra represents NOT operation, therefore above – mentioned equation can also be written as:

i.e. B equals to the complement of A

When +5V are provided on input A, it fully turns ON (i.e. it starts conducting) due to the reason that EB junction of transistor is forward biased. Thus, maximum collector current is received (i.e. maximum or extreme current passes through the collector). As such, all voltages (i.e. VCC = 5V), due to the flow of maximum current through R on the circuit,

drop parallel to R. As a result, an inverted output is received or output B comes to be on zero level or it becomes ground (i.e. exactly inverted 0 volts are received on output as compared to the input)

When zero volts are provided on input A (i.e. when input A is grounded or on zero level), the transistor does not conduct or it becomes off (because of providing 0 volts on its input, its EB junction does not forward bias) and +5V are received on output B (that’s output is at level 1). Thus, an inverted output is received relative to inputs in any situations. 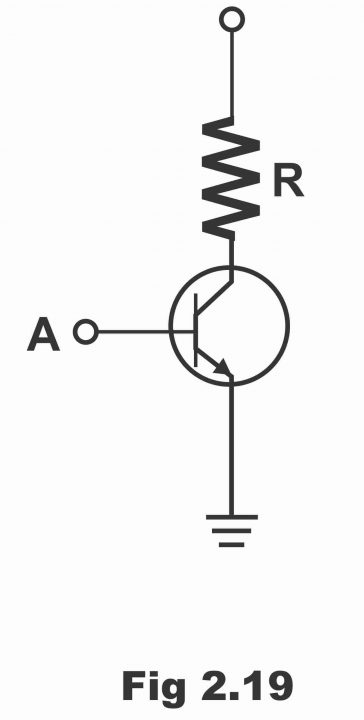 Types of ESD Tweezers and How to use them? Anti-static Tweezers, Anti-magnetic Tweezers