LDR Light dependent resistor is a Photoresistor whose resistance increases or decreases with the intensity of light. Photoresistor is the combination of two words photon which means light particles and resistor. LDR can sense the light intensity, due to this property it is mostly used in light sensing circuits.  It is also called a photoconductor. A Light Dependent Resistor (LDR) is also called a cadmium sulfide (CdS) cell or a Photoresistor. It is basically a photocell that works on the principle of photoconductivity. This LDR is mostly used in light varying sensor circuit, and light and dark activated switching circuits. LDRs are also used in Solar trackers, Laser security systems, etc.

In this article, I will try to cover the maximum things including its working principle and how an LDR can be used in different types of circuits and projects. 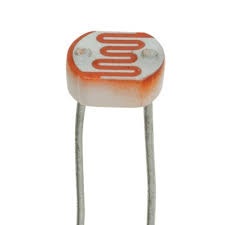 The symbol of LDR is:

Working principle of a Photoresistor:

In order to understand the working principle of a Photoresistor. We will first discuss the atom structure as we know that the outermost shell of an atom contains valance electrons which are loosely bonded so small amount of energy will require to make these electron free from valance shell.  Those electrons which are not attached with nucleus are known as free electrons. These electrons are free to move when an external energy like an electric field is applied. Thus when some energy makes the valence electron pull out from the outer orbit, it acts as a free electron; ready to move whenever an electric field is applied.  Photoresistors work on the principle of photoconductivity.

The number of free electrons and holes are increase when the material absorbs light and raises its electrical conductivity. When the light incident on the semiconductor it will raise the electron to band gap.

The change in the electrical conductivity of the Light dependent resistor can be measured by connecting bias voltage and a resistor in series. When the light will incident on the LDR its resistance will be changing due to which current flow in the circuit will also change.

When light falls on Photoresistor the light contains photons which fall on the device, which will make the electrons in the valence band to jump to the conduction band because the electrons are excited by the photon which has greater energy than band gap of semiconductor.  Hence when light having enough energy photons strikes on the device, the electrons from the valance band will start moving from valance band to the conduction band which results in a large number of charge carriers free electrons and holes. The result of this process is that the resistance will be decrease more and more current starts flowing through the device.

It is of two types either intrinsic or extrinsic Light dependent resistor.

This category of LDR is composed of undoped semiconductor material i.e. these type of Photoresistor are made from pure semiconductor material either silicon or germanium. In intrinsic Photoresistor the electrons are tightly bonded to the nucleus. There are less free electron. Sufficient amount of light energy is required to excite the electron from the valence band to conduction band. Small amount if charge carriers are release in this type of photoresistors they are not used in most application and are only useable within narrow wavelength ranges.

This type of LDR is made up of doped semiconductor material. In doping we add element which has high valance electrons such as phosphorous. The doping constitutes a new energy level above the valence band. Thereby reducing the light energy required to excite the electron.

Construction of an LDR

The construction of an LDR includes a light-sensitive material such as semiconductor that is placed on an insulating substrate like as ceramic. Light dependent resistor is made up of cadmium Sulphide semiconductor having negligible free electrons in the absence of any incident radiation. When there is no light striking on LDR in its resistance is usually in mega ohms while when light is striking its resistance is in few hundred ohms. The required resistance and power is obtained by giving LDR a zigzag shape. The area of zigzag separates the metal placed areas into two regions. The whole structure is placed in a plastic case so as to have direct exposure to the incident radiation. The resistance of the photo resistor is to be kept minimum as possible to make sure that the resistance increase or decrease due to the light effect only. The use of cadmium and lead materials is avoided as they are injurious to the environment.

Testing LDR with a Multimeter:

This is the maximum power the device is able to dissipate within a given temperature range usually it is 25C for photo resistor. This rating may be applicable above a certain temperature.

Particularly as the device is semiconductor based, the maximum operating voltage must be observed in darkness that may be applied to the device continuously. This is typically specified at 0 lux, i.e. darkness.

The photo resistor specification details the wavelength of maximum sensitivity. The wave length is the distance between two crust or trough in a wave. Curves may be provided for the overall response in some instances. The wavelength is specified in nm.

Different materials have different unique spectral response curves of wavelength versus sensitivity like ultraviolet light, visible light have different wavelength. Extrinsic light dependent resistors which are doped semiconductor in which impurities are added for conduction are generally designed for longer wavelengths of light, with a tendency towards the infrared (IR). Mostly photo resistors are made up of extrinsic semiconductor when working in the IR range must check that heat not build up because thermal energy can affect the measurement of resistance.

Photo resistor possesses time latency in changes in resistance and illumination. Latency is the time taken by the component to respond to any change. This phenomenon is called the resistance recovery rate. It takes noticeable time in light level usually about 10 ms for the resistance to drop completely when light is applied after total darkness,  when the light is completely remove resistance rise back in 1 second to the starting value.  Due to this reason LDR should not be used where light is constantly changing. Light dependent resistor is used in audio compressors to smooth the response.

The use frequency of lead sulfide is much higher than that of cadmium sulfide, but the delay of most photoresistors is relatively large, so it cannot be used in applications that require fast response.

Photo resistors are divided into three types according to characteristics: 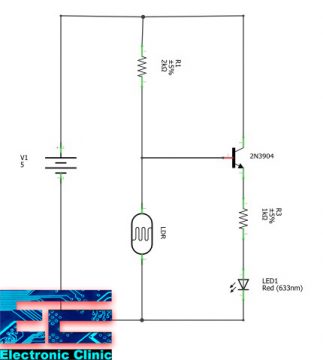 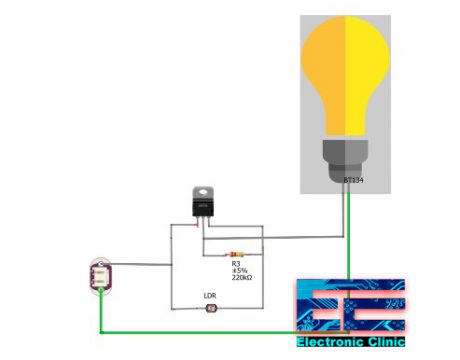 In this project we are using BT134 power transistor the pin configuration of this transistor from left to right:

I also have a very detailed tutorial on how to make an automatic street light control system using LDR and 555 Timer IC. 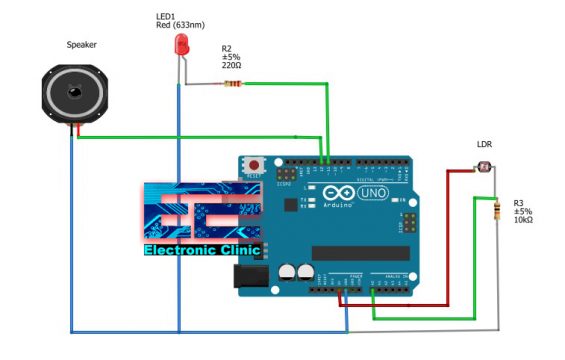 In this project we will activate buzzer and led through LDR. This project will work on the intensity of light when the LDR is not exposed to light the resistance of the LDR will be maximum led and buzzer will be turn on. When LDR is exposed to light the resistance will be decrease and the LED and buzzer will off. The speaker and led negative terminal will connect with the ground. The speaker other will connect with digital pin 11 and connect led with the digital pin 11. Connect the LDR with analogue  pin A0 and other pin with the 5V. 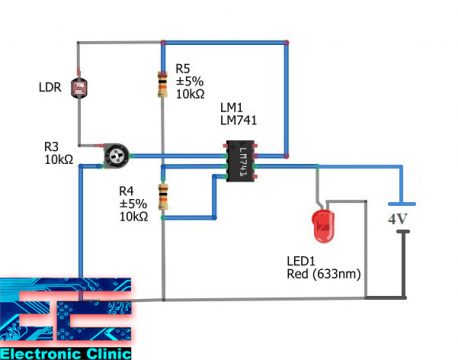 In this project we will control the led through the operational amplifier LM-741. We can adjust the resistance through potentiometer. 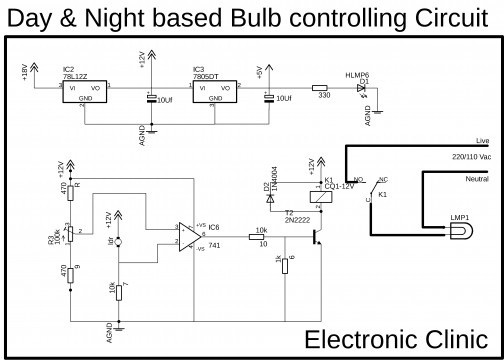 V2 = the voltage coming from the LDR.

When V1 > V2 the output get High, and at the output we get voltage which is approximately equal to the input supply voltage which in our case is 12 volts. The output voltage of the LM741 IC is not exactly 12 volts it can be around 10 to 11 volts. So when the output is high we get around 12 volts.

At this point we are able to differentiate between the day and night and accordingly we get 0 volts and 11 volts approximately. Now the next step is to use this output voltage to control a Relay which can be used to control a light Bulb. But if you look at the datasheet you will find that the output current of the LM741 IC is 25milliamps which is not enough to turn on a 12v relay. The relay I have used in this circuit needs around 32milliamps. So it means we will need some kind of driver to control the relay.

As we know the output voltage of the LM741 IC is around 12 volts when in ON state so if this voltage is directly connected with the base of the 2n2222 npn transistor it will completely damage the transistor. Now to solve this problem we will need to use a voltage divider to reduce the voltage. so that’s the reason I used 10k and 1k resistors in series. This the base voltage never exceeds 6 volts. Now we can turn ON and Turn OFF the 2n2222 NPN transistor without any problem. The transistor will be used to control the 12v relay. This relay is of the type SPDT “Single Pole Double Throw”.

This relay can be used to control any type of bulb, AC or DC. You can also connect a buzzer instead using a bulb. Now it entirely depends on you for what purpose you are going to use this Circuit.

In the following simulation you can see the ON and OFF state of the Relay. 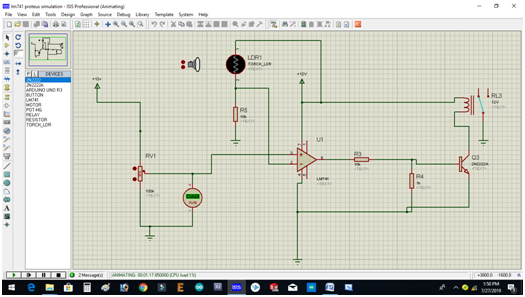 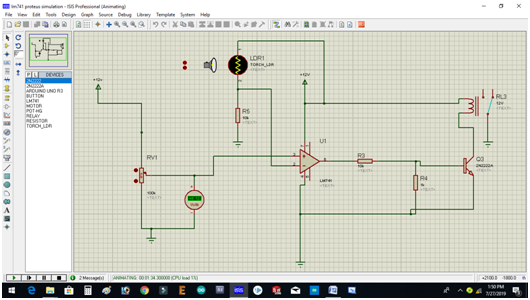 Following is the PCB design of the day and night detection circuit designed in CadSoft Eagle 9.1.0 version. 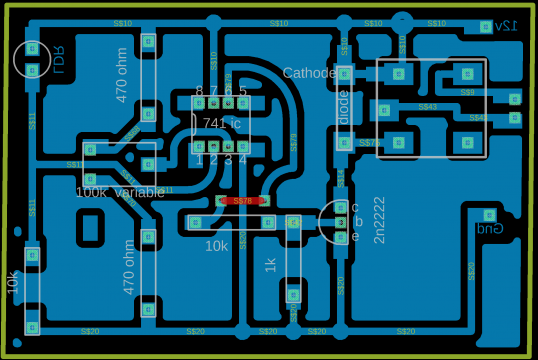 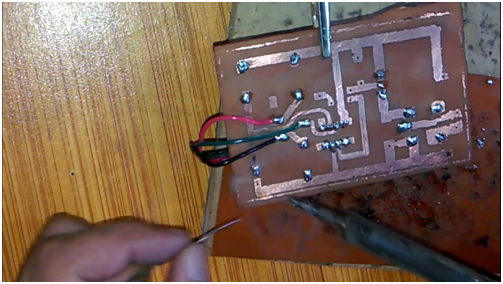 I made one prototype model at home, did all the soldering and it worked perfectly.

The circuit which I discussed above can also be used in the Solar Tracker system. For the Sun tracking we need two LDRs, I am talking about the one dimensional solar tracking system. Download the Arduino and LDR based Solar Tracker programming. 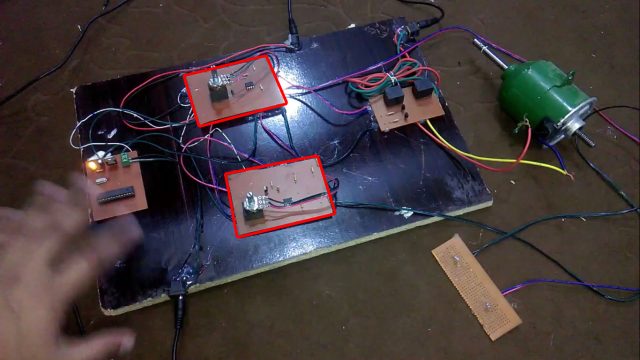 As you can see the same circuits are used in the Solar Tracking system.

The same circuit can also be used in a laser security system. You only need to point the laser on the LDR, set the reference voltage and now if anybody cross the laser the buzzer will turn ON or you can signal a microcontroller. This circuit has so many uses. Think about the other uses and let me know in a comment. 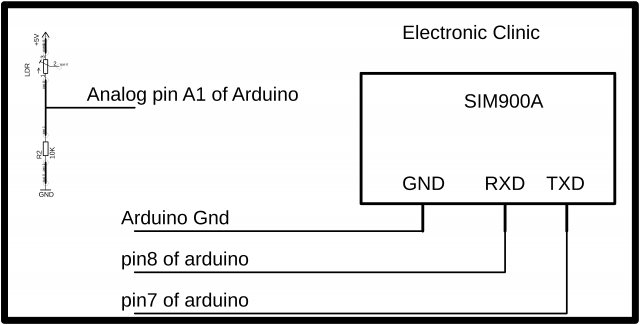