In the beginning, operational amplifiers were manufactured through discrete devices (these devices were fabricated with vacuum tubes and worked on high voltages). However, the invention of integrated circuits made their fabrication quite easy. An operational amplifier is a device that works as an important building block in the design of different electronics circuits. These days, such circuits are made along with various internal arrangements of linear integrated circuits. They are very reliable, cheap, and work on relatively low DC voltages. They can successfully be operated between 0 to 1 MHZ. In fact, an operational amplifier is not a discrete or individual device. Rather it is such a complicated circuit that is composed of several components (i.e. it has about 20 -25 devices along with a transistor, diode, and resistor). An operational amplifier IC may contain 2 dozen transistors, one dozen resistors, and one or two capacitors, however, practically it is considered a single device. It is used in a closed case/ shell, along which only external connections are furnished for the user. As a majority of operational amplifiers are IC type these days, therefore, the study of their input and output characteristics is very important.

Although an operational amplifier is a sort of complete amplifier, however, it is designed in such a manner that external components (resistors, capacitors etc.) can also attached along with its terminals, so that its external characteristics (e.g. amplifier voltage gain, input and output impedance and frequency response, etc.) could be changed. Thus, setting up this kind of amplifier for some particular purpose is relatively easy. And due to its versatility, its usage has gained tremendous popularity in the industry.

Operational amplifiers are available in three different packages. i). Standard dual-in-line package ii). To-5 case iii). Flat pack. These are colossally used in analogue computer operations, instrumentation and control systems, phase shifts and oscillator circuits. Their different types are identified through the numbers printed on them e.g. µA709, LM108, LM208, CA741CT, CA741T, etc. µA709 is a high gain operational amplifier, which is fabricated on a single silicon chip using the epitaxial technique. It was the most massively used monolithic Op-AMP which was manufactured by Fair Child semiconductor in 1965. It is used in DC servo systems, high impedance analogue commuters and level instrumentation. The most widespread amplifiers are 741 number amplifiers. These are high-gain operational amplifiers that are used as comparators, integrators, differentiators, dc amplifiers, vibrators and band pass filters, etc. 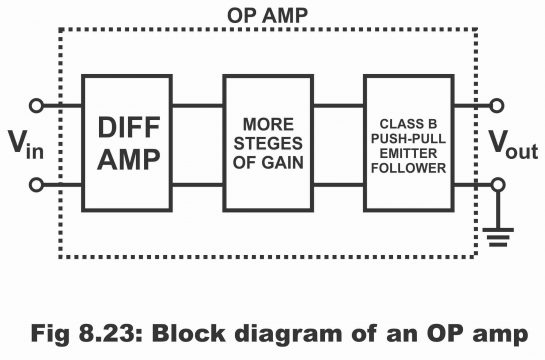 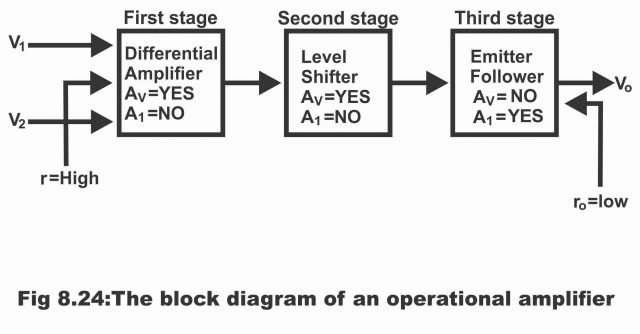 In some symbols, positive and negative bias terminals seem juxtaposed whereas in others they seem on one side, as is evident from the triangular type symbol illustrated in the figure.  These are usually standard symbols of an operational amplifier, wherein no change is possible except that negative and positive inputs are sometimes reversed (that’s negative input is made upper while positive input lower occasionally). Sometimes, positive terminal is not revealed at all and it is assumed that it is connected with the ground. 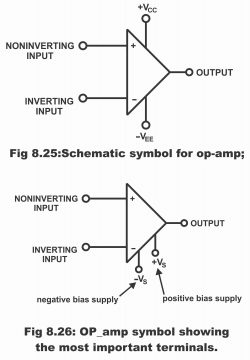 In figure 8.27, another standard symbol of an operational amplifier has been illustrated, in which inverting input (i.e. negative sign) is been made up instead of making it on the lower end, whereas non–inverting input (i.e. positive sign) has been drawn low instead of high side in the diagram (totally opposite to the signs given above). Further, the input signal is denoted by טi. In the majority of applications, one of the amplifier’s inputs is grounded. In such a situation, if an input signal is provided to a non-inverting (positive) terminal, amplifier output becomes in-phase with ט0 input. If the input signal is provided on inverting input terminal (negative terminal), ט0 gets out of phase with respect to the input. This has been elucidated via the table given in the figure. 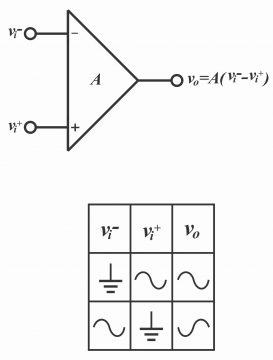 2). Its input resistance or impedance (which is measured between the inverting and non-inverting terminals) is infinite (i.e. Ri=Zi=∞)

The aforementioned characteristics of an ideal operational amplifier have been shown in the figure 8.28 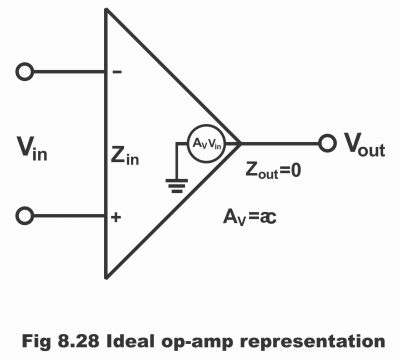 1). Infinite input resistance or impedance means that the value of input current is zero (I = 0), which means that an ideal operational amplifier is a voltage-controlled device.

2). Zero output resistance or impedance means that Vo does not depend on load resistance parallel to output.

3). Although the gain of an ideal operational amplifier has been assumed as being infinite (Av= ∞), however practically its value is extremely high (approx.106). However, it does not imply that a one-volt signal amplifies to become equal to 106 on output. In fact, the maximum Vo value is limited through bias supply voltage (distinct value of which is (±15v). If  Vo = 15V and Av = 106, the maximum value of input voltage gets limited to 15µV (i.e. /15/106=15µV). Thus, one volt cannot become one million on an operational amplifier; however, 1µV certainly amplifies to 1V. Remember that a large number of modern amplifiers have the capacity of extremely high gain and input impedance while extremely low output impedance. 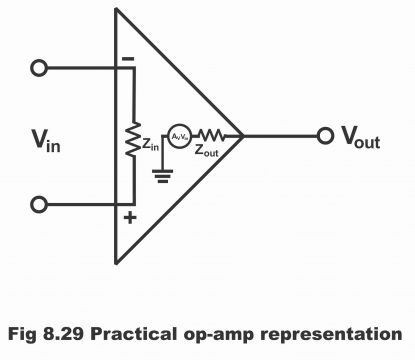 The voltage on output terminal with respect to ground= eout

As the figure shown in diagram (A) is complex and complicated, therefore difficulty is being experienced in reflecting it in the circuit. Thus, the figure is expressed in a simple manner similar to figure (B), in which ground has not been shown. However, it is always assumed that the ground is present on a common terminal of negative and positive supplies. Thus, voltages are expressed or presumed with respect to this unseen ground on different terminals of operational amplifiers. Remember that for simplifying the symbol of an operational amplifier, power supply terminals are not shown on a large number of circuits on its symbol.

In a majority of amplifiers, symmetrical positive and negative supply voltages are used (i.e. values of both supplies is symmetrical). Most of the common voltage supplies are volts. Through the application of negative and positive bias supplies, output voltages of operational amplifiers keep swinging between positive and negative with respect to the ground. Some of the amplifiers are provided with just a single polarity supply (e.g. 0V – 30V), which is being provided to the supply terminals. Under such a situation, eout polarity remains according to the supply polarity.

The operational amplifier is a differential amplifier which means that it amplifies the difference existing in voltages on the two input terminals. Its output voltage can be expressed through an equation as follows:

Here, e1 and e2 are voltages on positive and negative input terminals whereas A VOL means amplifiers’ open-loop voltage gain (i.e. voltage gain of an operational amplifier without any external feedback connections). The term (e1 – e2) shows the difference in voltages on input terminals. Often, this voltage difference is also expressed as a differential input ed, as illustrated vide figure 8.31 i.e.

Figure 8.31 Op-AMP amplifies the difference between e1 and e2 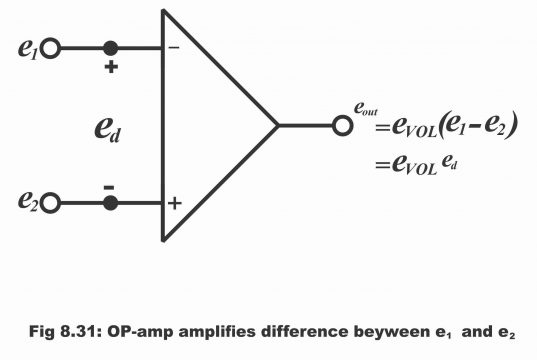 It is to be remembered that when e1 value exceeds e2, (i.e. e1 > e2), ed will be positive and when value of e1 is less than e2, (i.e. e1<e2), ed will be negative. It must also be kept in mind that an operational amplifier amplifies the differential between e1 and e2 instead of amplifying it themselves. Above eout equation can also be expressed as

The maximum output voltage amplitude (the height of a changing quantity is called amplitude) of an operational amplifier can be confined (limited) through the size of power supply voltages provided on operational amplifiers’ bias terminals. The specific value of the maximum amplitude is normally less 1.5 volt compared to the bias voltage supply. For example, if the bias supply voltage value is, the amplitude of eout can be limited to 13.5, which is represented by drawing a graph between eout and ed, as has been illustrated in figure 8.32.

Here the value open-loop gain voltage value of the operational amplifier has been given as 10,000.

The graph reveals that eout change linearly up to a very small range of ed (i.e. they change together). When ed value increases beyond a certain limit, eout saturate on 13.5 volt or 13.5 volt. This kind of saturation on the polarity of ed. The value of ed, on which saturation occurs, has been demonstrated through following formula:

Thus, characteristics of an operation amplifier are as below:

1). It is a DC (direct current) amplifier

2). Its voltage gain (in an ideal situation) is very high

3). Its input impedance is very high (in a typical situation)

4). Its output impedance is very low (in an ideal situation)

5). When its input is at zero volts, its output is also zero.

7). Its common mode rejection ratio (CMRR) is extremely high (it means that it rejects unpleasant noise and hum signals quite effectively)

8). It operates with single-ended output and differential inputs (though inputs are mostly grounded) 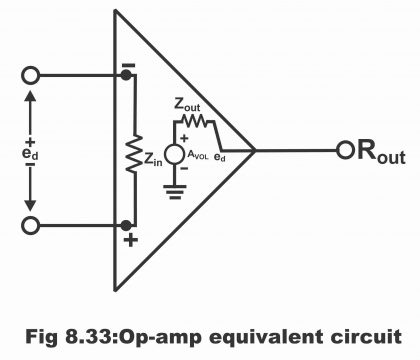 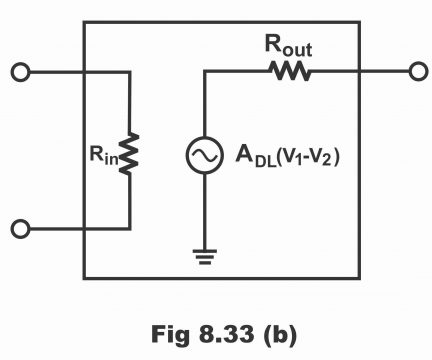 Working Method of a Common OP-AMP

An operational amplifier basically is a directly coupled high gain amplifier, through the feedback of which, its collective response characteristics are controlled. In its integrated form, a completed amplifier circuit is assembled on a small silicon chip and is enclosed in a capsule. Pins are fitted on suitable amplifier spots which have been jutted out of the capsule. For using amplifiers, these pins are properly fitted along with the other external components, thus, a specific response is received from an operational amplifier. 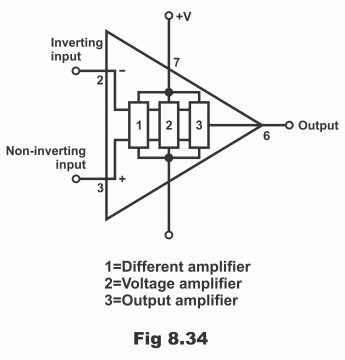 The second stage comprises a high gain voltage amplifier. This stage is a collection of a number of transistors which are usually configured as Darlington Pairs. The gain of this specific type of an operational amplifier is about 200,000 or even higher. Thus, the stage generates a major gain share.

The operational amplifier is provided a dual power supply (i.e. both [positive as well as a negative type of power supply), due to which output voltages are sometimes either positive or negative with respect to the ground (i.e. swing between positive and negative).

One of the inputs of an operational amplifier has been grounded for being used as an amplifier. The signal which is meant to be amplified is provided on other input. If positive input is grounded and signal provided on negative input, in such a situation output is inverted to input, however, it is received in an amplified form. On the contrary, if negative input is grounded and signals and signals provided on positive input, the signal amplifies but it is not inverted to input (I.e. non- inverted but amplified output is received). Both input terminals are connected directly on Q1 and Q2 base. 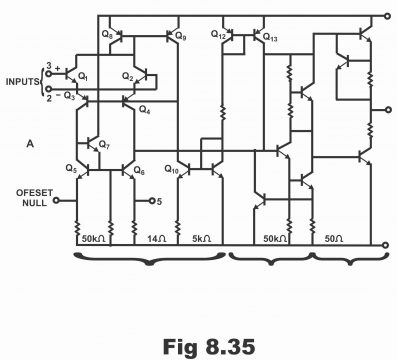 It must be remembered that there is no base resistor in an operational amplifier. Similarly, DC current repulses back to the ground via an external circuit. Normally, it is not considered an issue as DC is grounded via a signal source. However, in some of the situations, the coupling is also done within different stages through capacitors. For this purpose, a resistor is added for providing a retreating route to DC. The standard symbol of an operational amplifier resembles a triangle as shown in figure 8.30. Supply connections have been reflected in figure (A), whereas these supply connections have not been revealed in symbol figure (B). For simplicity purposes, supply terminals have not been depicted. However, it has to be kept in mind that supply terminals do have a presence. In figure 8.36, standard packages of an operational amplifier have also been shown. 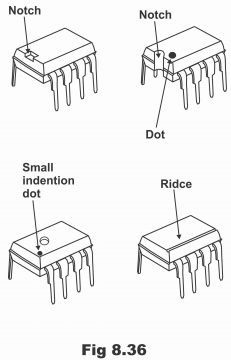