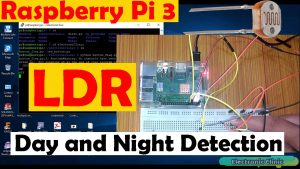 raspberry pi 3 LDR- In this Tutorial, you will learn how to use an LDR “light-dependent resistor to control an LED” light-emitting diode”. The LED will be turned on and turned off depending on the light intensity in the room. This project can also be used for day and night detection. 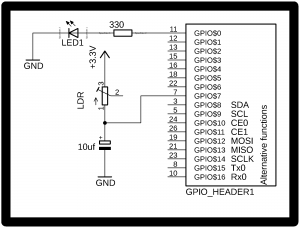 This schematic is designed in the Cadsoft eagle 9.1.0 version. If you want to learn how to make schematics and PCB then watch my tutorial. 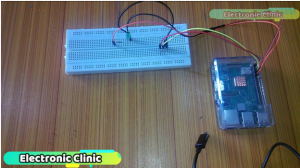 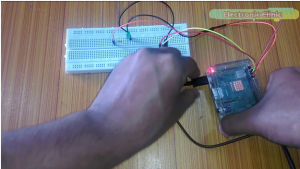 Now let’s power up raspberry pi. now we are ready for the programming… as you can see no keyboard and mouse is connected and it has no physical connection with the laptop or an LCD. because as I explained in my previous tutorials, we will be using the ssh network using the putty software to write and execute programs. So I recommend you should watch my previous tutorial. The link is given below.  Which completely explains, how to set up your ssh network using wifi.

How to set up the SSH network using wifi:

For the Step by Step Program explanation watch video Tutorial given at the end of this Article.

Watch the video for the Complete explanation. The video is available at the end. Below is the script used while recording the video.

enter the IP address of your raspberry pi and click open.

Enter pi as your login name.

Use clear command to clear the screen…use the ls command to list all the files and folders..  Open the youtube folder by typing cd youtube….now use the ls command to list all the files …led1.py is the program that I created in my last tutorial…now let’s make another file with the name ldr and extension .py…simply type sudo nano ldr.py and press enter…as you can see an editor is opened…first we start by importing rpi.gpio ..time ..and then use the setmode function to specify the numbering scheme which will be used…I have already explained these three instruction in my 2nd tutorial, so I recommend you should watch that tutorial the link is given in the description…then define a variable delay time and set it to.

1….later if you want to change the delay you can simply change this value over here..now let’s define another variable with the name value and set it to zero…this variable will be used to store the LDR value..now let’s define pins… ldr = 7….ldr is connected with pin number 7…led = 11….led is connected with pin number 11….now let’s use the gpio.setup function to set the led as output, as you know led is an output device..now let’s use the gpio.output function to turn off the led..by default we keep the led in off state…

Now let’s make an infinite while loop….by simply typing while true…now lets print the ldr value for this we use the print function…first store the ldr value in variable value…value = rc_time function and use the print function to print this value…now lets use if conditions to turn on and turn off the led the value 10000 is selected after testing this project in my room..and then use the exception and finally instruction which I have already explained in my previous tutorials…

So now our program is ready… press control o on the keyboard to save…and then press control x to exit the editor….now use the ls command to list all the files,as you can see the ldr.py file is created…let’s run this program by simply typing python ldr.py and press enter…