Transistors-  I have been using NPN and PNP type transistors for quite a long time, in different electronics based projects and controller based projects for controlling relays, motors, and other electronic circuits. I have a very detailed tutorial on the NPN and PNP type transistors in which I explained the extreme basics, including the construction and working. transistors are semiconductor devices this means that transistors can be both conductive allowing current to pass through them or non conductive which blocks current from flowing through it. Transistors can be used as a switch essentially emulating a mechanical switch but in a solid state form. Before, I move on, I have a transistor connected within this circuit.

it’s a simple circuit consisting of an approximately three volt power supply connected to an LED with the collector and emitter of this transistor connected in series. Currently we have everything connected and we are playing this circuit live. What we would expect is current to flow from this power supply through the LED back through the transistor and to the power supply and in that case the LED should be in ON state, but the LED doesn’t light up because no current is flowing through the circuit, so why is this? well that’s because by default transistors are in their non conductive state and something needs to change here to turn this transistor on enabling it’s conductive state to turn the transistor ON to its conductive state. We need to apply a voltage to the base of the transistor in this case we have the collector and the emitter, but we also have a third terminal which is the base. The transistor used in the above circuit is NPN type. To practically test this circuit you can use one of the most commonly used npn transistors 2n2222 or the BC547. A month before, I uploaded an article which I have explained how to use the 2n2222 and BCS547 transistors in some electronics projects. I highly recommend you should read this aritlce.

If I turn this power supply off by disconnecting it you can see the circuit above it stops as well. Because now the transistor is back to its non conductive state, because voltage is not being applied to the base of the transistor.

So why are transistors so common and so useful? well without transistors today we simply wouldn’t have the luxury of computers and other digital devices. Transistors can act like very fast switches that we can control to switch on and off at very fast speeds. We can switch them on and off at a rate of millions of times a second. In fact if you think of a computer you most likely know that they work with binary data essentially zeros and ones. Those zeros and ones essentially represent the on and off state of a transistor and there are billions of transistors in your computer’s processor. This means that the computer can understand those transistor switches as zeros and ones and encode them into useable data and instructions. Because transistors can turn on and off so quickly, this gives us many advantages when we want to control other devices such as LED lights and motors, etc, enabling us to turn them on or off vary the speeds vary the brightness frequency etc. 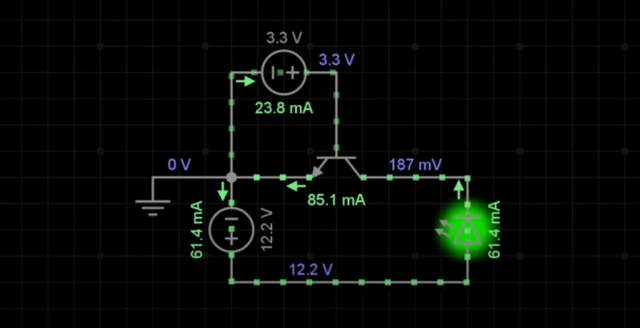 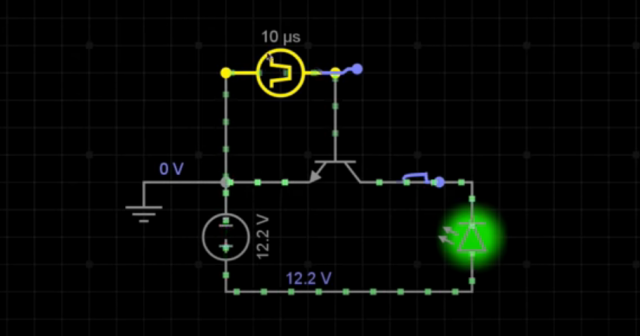 So, I have this transistor supplied with a low voltage, switching on and off a higher powered load.  I’m using a digitally controlled voltage source here, which is pulsing voltage to the base of the transistor every 10 microseconds obviously it’s much slower. In every circuit mainly for your understanding, but also because every circuit cannot show in real time. The pulsing of voltage here to the base of this transistor is switching the circuit above on and off. The pulsing is known as pulse width modulation. So, this voltage source could be a digital device like a microcontroller or a computer. I won’t go too deep into pulse width modulation. But the amazing fact here is that I am able to digitally control a high-powered device with a low powered voltage source to the base of the transistor. So, obviously depending on the type and size of a transistor, they are able to switch high powered and low powered devices we’ve seen or talked about an example of both here.